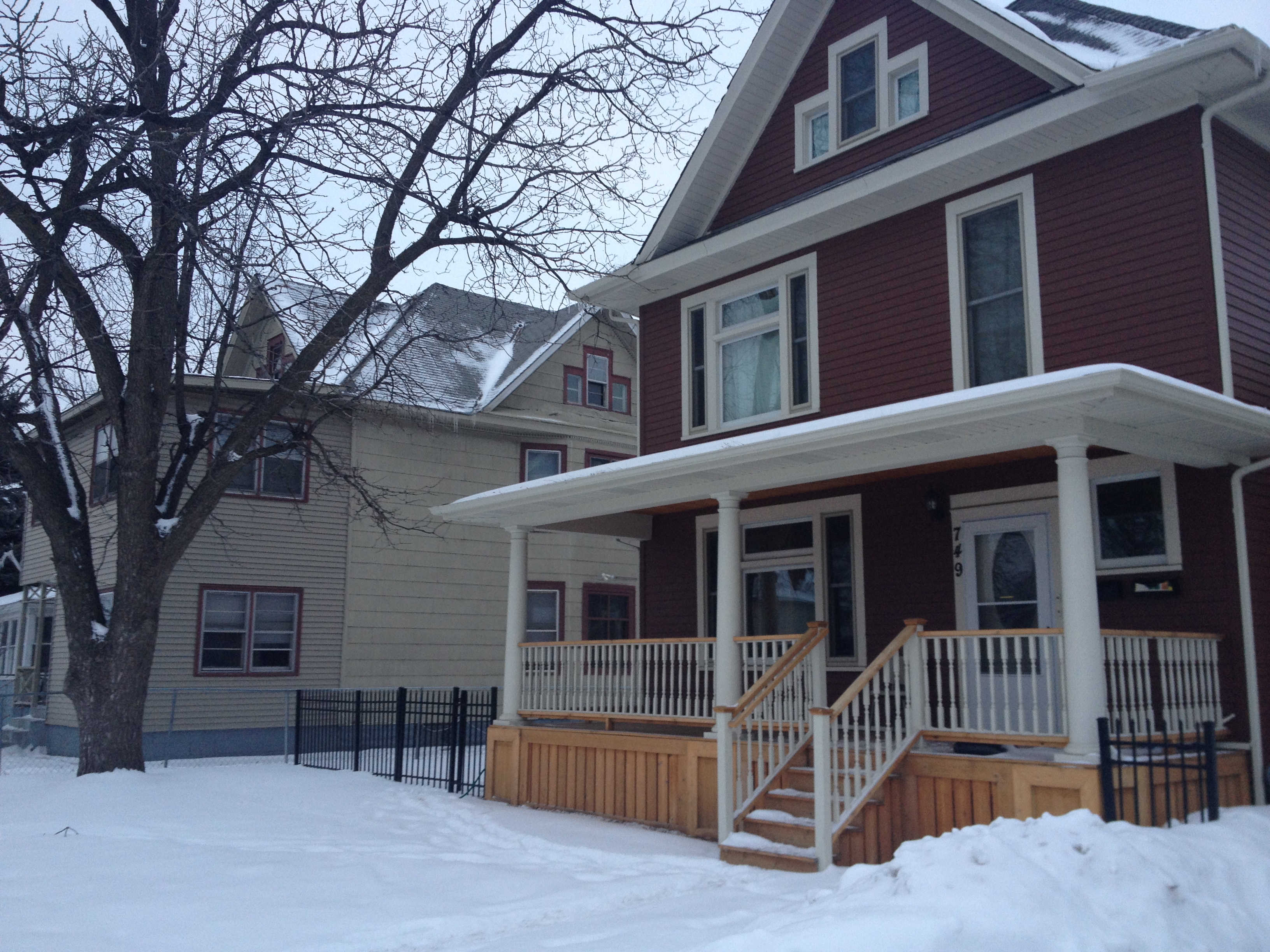 The  recently developed duplex rental house by the Greater Frogtown Development Corps at the intersection of University Ave. and Grotto St.

Wearing an oversized winter coat with his hood up and gloveless hands in his pockets Tim Goss stood on the front porch of the newly renovated house he calls home – for now.

“I love the house. Hate the neighborhood.”

The 37 year old Goss is referring to his rental duplex in Frogtown located at the intersection of University Avenue and Grotto Street. This specific home was one of seven known boarded and vacant homes recently developed by the Greater Frogtown Community Development Corporation to be rented out as affordable housing.

Goss moved into his house May 14, 2012 and says he is very happy with the formerly vacant home.

“The house itself is nice,” said Goss. “It’s roomy, the location is great, and there is a fenced yard for the kids.”

Goss and his wife have two kids, ages 9 and 11, and despite his enthusiasm for his house, he is concerned Frogtown is the wrong environment to be raising kids. He worries for their safety and is concerned they will be exposed to crime and violence at a young age.

Shaking his head and looking off in the distance Goss said, “This is not a safe area.” He pointed to the southeast corner of University Avenue and Grotto Street and said there had been two men shot in the parking lot the other day. Turning to the neighbors’ house (shown on the left side of the photo) he said that there had been a recent shooting that greatly alarmed him to the violence.

“The house was shot up.  There was a couple in their late 50s early 60s living there, but two days later they were gone.” Shaking his head and sighing, he said, “I would’ve done the same, man.”

Goss balances raising a family with a full work schedule and is a student with the University of Phoenix online. He hopes to acquire a degree in Business Management. After he attains his degree, he plans to open up a restaurant with his wife. He has been working to get by and has saved up enough money to get a car soon.

An employee and a customer at nearby St. Paul Grocery together recounted five additional recent shootings in Frogtown.

Sam Buffington, community organizer for the Frogtown Neighborhood Association, sees the foreclosure crisis and vacant houses that followed as major reasons for the high crime rate in Frogtown. In terms of foreclosures, Frogtown was the hardest hit neighborhood along the Central Corridor line. According to the Big Picture Project: Central Corridor Affordable Housing Plan Report, the Midway East area of the Twin Cities, which includes Frogtown, saw 117 foreclosures between January and June of 2011. The 117 foreclosures are twice as many as in any of the other five areas along the Central Corridor line studied in the report.

“Things are getting better every year and fairly drastically. Violent crime has gone down pretty drastically. Sometimes the reputation and perception of crime and safety is worse than it actually is.”

Buffington described what he calls a “visual foreclosure.” He thinks people perceive safety concerns when there are a lot of vacant, run-down houses. Developing vacant properties not only would serve an economic purpose, but also would ease concerns surrounding the vacancies being hotspots for criminal activity.

Buffington believes the neighborhood needs to continue to work toward community involvement. “Frogtown is a really diverse neighborhood. There are a lot of different types of people coming from different places and that can make people uncomfortable”, said Buffington.

According to Buffington, the Frogtown Neighborhood Association has created several clubs and projects to involve the community during the construction of the Central Corridor light rail on University Avenue. The FNA has encouraged community gardens, trash pickup, and barbecues, and has created several clubs gathering people over common interests ranging from motorcycles to horseshoes. To help directly with safety the FNA has organized seminars to teach how and when people should call the police.

Buffington believes Frogtown will be a more desirable neighborhood to live in if new developments have a high level of community engagement.

“The more people understand each other, the more opportunities there are and the safer the neighborhood will be”, concluded Buffington.