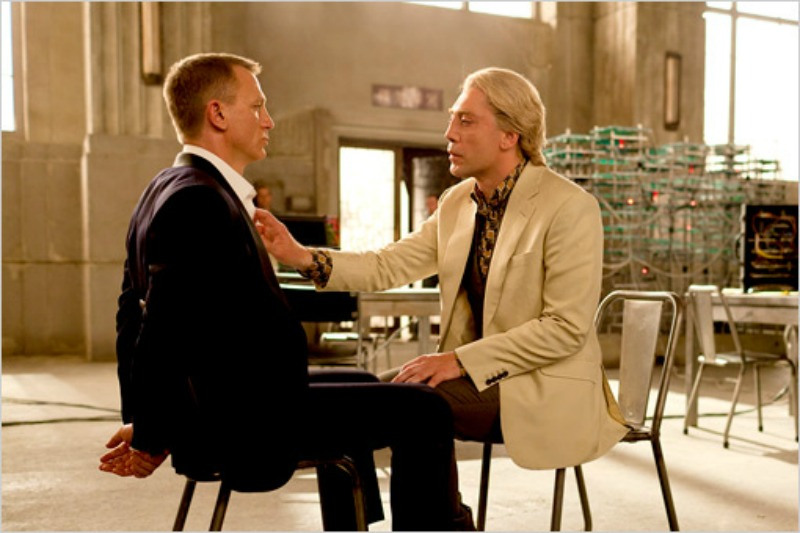 In his third time around portraying the iconic, timeless spy James Bond, Daniel Craig looks like a perfect candidate for a Viagra commercial. There’s gray in his stubble, the bags under his eyes are starting to sag, and his hairline has perhaps taken a step or two back in retreat from the intensity that lives in his eyes. And yet, Bond still has a solid three inches of muscles slapped on his chest, the ability to charm women into bed with just one look, and the endurance to sprint rather than walk to destinations. Skyfall makes a point of featuring a Bond whose mind and body has lost a step in the wear-and-tear field of espionage, but who is still capable of getting the job done, even if you doubt he’ll succeed along the way.

During an exhilarating opening chase scene in Turkey that’s Planes, Trains, and Automobiles (1987) if you take the planes out and replace them with rooftop-racing motorcycles and a car-crushing backhoe, James Bond, 007, the agent number one in the hearts of Brits and Americans alike, is accidentally the receiving end of a bullet shot by colleague Eve (Naomie Harris). Bond’s limp body falls into the churning depths of the river below and disappears. He’s declared missing and presumed dead by M (Judi Dench), the leader of Bond’s employer, M16. M even writes Bond’s obituary.

But like Jason Bourne in The Bourne Ultimatum (2007), James Bond will rise from the clutches of a watery grave to live on. And with a second chance at life, Bond decides what he really wants to do is drink, make love, and drink. And he does just that on the sandy stretches of shorefront in an unnamed paradise, declining to even give M16 a phone call to let them know that his flesh is still warm and not resting in the bellies of underwater bottom feeders. Bond feels indebted to get back in the game, though, when he finds out that an explosion has rocked M16: a wicked first step of payback to M by a former agent named Silva (Javier Bardem), a man who was badly affected by M’s past actions as head of M16.

Bond trades the sand between his toes and a shot glass for a suit and a gun as he reports back for duty in London to help his ailing colleagues. The transition from booze-soaked retirement to fists-and-guns action isn’t as smooth as Bond thought it would be, partly due to his ascent into old age and partly due to Silva being a formidable foe. On this adventure, Bond doesn’t have the energy to put swag in his step. He’s just trying to get through each day without his knees buckling.

Once again, Daniel Craig is able to instill emotion in a stone-faced assassin. This new-age Bond radiates regret when he’s forced to leave a shot comrade behind to bleed to death. He jokes with his co-workers and makes you laugh though he never cracks a full smile. And he doubts his abilities as an agent when he blankly stares at the target he just missed in the firing range. Craig subtly shows through his actions that although he has a diamond-hard exterior, he’s still a vulnerable human on the inside.

As Silva, Javier Bardem provides Bond with a worthy opponent. Bardem, who has the uncanny ability to become his characters like few other current actors are able to do (see 2007’s No Country for Old Men), delivers an extremely unnerving performance that fans of the Bond series probably won’t see coming. Silva has a chilling backstory. Horrible, mutilating things happened to him in the past that made him the insane, vengeance-seeking man he is today. Silva has endured so much pain that you can’t help but feel sorry for him even though he’s a deranged killer. Bardem injects Silva with a focused lunacy; the man has severe psychological damage for sure, but when it comes to revenge he’s as focused as a military man wearing ironed pants. There’s even a flamboyant side to Silva, and in one scene when Bond is tied to a chair, Silva clearly flirts with 007, fondling his shirt collar and brushing the scar on his chest with a gentle hand.

The supporting roles are in sound condition. A white-bearded Albert Finney (2003’s Big Fish) plays Kincade, the gamekeeper of the Bond estate. Finney delivers wry one-liners for comic relief and gets to shoot a sawed-off shotgun. Naomie Harris (2002’s 28 Days Later) as Eve is a sexy and smart woman in Bond’s life, proving she can dish out some trash talk as well as be alluring in an evening gown. Ben Whishaw (2012’s Cloud Atlas) is cool and collected as Q, Bond’s new tech-savvy quartermaster who’s young enough to be his son but is a wizard behind a laptop.

Screenwriters Neal Purvis, Robert Wade, and John Logan aim for a practical, unique Bond experience with their screenplay. The gadgetry is limited to a gun that reads Bond’s handprints so that only he can fire it, and a radio. Q even tells Bond that M16 isn’t into the whole exploding pen bit anymore. Much of the action is stripped down to mainly feature Bond running. He runs through subways, across a frozen pond, over the claw of a backhoe, and on many other surfaces. There is still some heavy firepower, though, and it’s not cartoonish. A tense shootout in a courtroom is hauntingly real, and later there’s a relentless game of cat-and-mouse involving shotguns and rifles in an old stone house.

Ultimately, though, there aren’t as many explosions and gunfire as you’d expect from a Bond movie. Hand-to-hand brawls are kept to an unsatisfactory minimum; a physical showdown between Bond and Silva, something you expect to occur in an epic climactic scene, never happens. Director Sam Mendes (1999’s American Beauty) lures you along like there’s going to be a dramatic clash between hero and villain, but because there isn’t one the film ends on an underwhelming note. Mendes and his writers invest most of the movie in intelligent dialogue, and while it’s fascinating to hear Bond talk about his feelings to anyone who will listen, there’s a little too much chatting and not enough action to keep the movie from being labeled as a “talky thriller.”

Skyfall is a solid entry to the Bond franchise. Surprisingly more practical entertainment than fancy escapism, it continues to expand James Bond as a person rather than focusing solely on his superior killing capabilities. Though underwhelming at times, Skyfall is overall a successful mix of witty dialogue and suspenseful action.