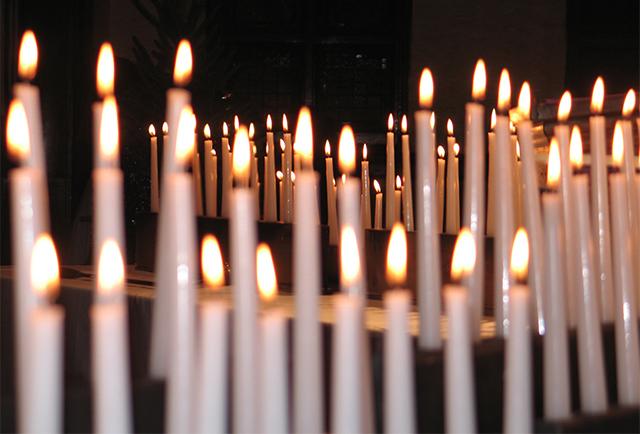 600 to 700 persons will attend a service including music, lighting of candles and the saying of the name of each deceased person as well as reflections about their lives. (Photo courtesty Simpson Housing Services)

Betty Skye was discovered dead early last spring on the boardwalk that fronts Lake Superior in Duluth and Jane Mitchell died in a Minneapolis hospital, both victims of hard-living and homelessness.

But it’s their better days and happier moments that will soon be celebrated.

The women are two of more than 100 Minnesotans marked by homelessness whose lives and deaths this year will be commemorated during a silent but public march and a candlelit remembrance service Dec. 20.

Maybe other years you’ve seen the solemn winter Solstice-time procession from the Hennepin County Government Center in downtown Minneapolis to Simpson United Methodist Church on First Avenue, a trek many homeless persons have made for decades in search of a bed for the night.

This is the 28th year friends, families and advocates will carry signs bearing the first names of people who this year died in homelessness or whose lives were marked by that state of being or who advocated on their behalf.

“To me, it’s the highlight of the holiday season. It’s sad, but it’s so moving,” says John Petroskas, who works a day job helping the homeless, but for a decade on his own time has volunteered with the memorial event.

At the church, 600 to 700 persons will attend a service including music, lighting of candles and the saying of the name of each deceased person as well as reflections about their lives.

One year, when funding was particularly tight, planners at Simpson Housing Services, the founder of the event, considered re-using candles from one year to the next. But Carla Gainey, then Simpson’s executive director wouldn’t hear of it. “Everyone should have their own candle,’’ she said. And so it is at this year’s gathering, an event still sponsored by Simpson but embraced as well by the Minnesota Coalition for the Homeless, Shelter Providers Action Association and the St. Paul Area Coalition for the Homeless.

Following the service there’s turkey dinner in the church basement where mourners – both homeless and housed — sit side by side.

Petroskas says people who are homeless are a community of their own — even after they are housed — a forever neighborhood of sorts drawn together by their situation, and they need to come together to mark their neighbor’s passing.

Some in this community are homeless by choice, others by circumstance, but they know one another, by face at least, he says. They pass on the street, eye one another on public buses, stand in the same soup lines, vie for shelter beds and day labor jobs.

“They live a hard life style,’’ says Petroskas, who works with Catholic Charities. “Homelessness is really hard on people’s health with a lot of chemical dependency and mental health issues,” he says. Further, those who wander the streets are often estranged from their families because of their behavior.

“When they pass away, sometimes we’re the only ones to remember them.’’

Petroskas is the keeper of names, compiling the list of those who have died this year from county medical examiner’s offices, from other homeless persons as well as the wide network of people staffing the agencies that ease their lives.

As of mid December he has 101 names on his list, 43 who died while homeless, 46 who were formerly homeless and 12 who were advocates, though names were still coming in.

Among them are Skye and Mitchell.

Gretchen Nickence, once homeless herself, knew them from the days she volunteered at the Kola Project, where she met many people trapped in the throes of chemical addiction, alcoholism and mental illness. They’d come to Kola to shower and wash clothes, drink coffee and play pool.

Mitchell, 42, whom she says died of a liver ailment, was “more quiet and reserved, but always smiling” and had a son and daughter but died not long before her first grandchild was born.

Skye, about 50, was a good friend of Nickence, and a mother and grandmother, “always smiling and joking and really enjoyed life.’’ They had a special bond, Nickence says, because Skye was from “the same rez I was from,’’ the La Courte Oreilles Reservation near Hayward, Wis.

“They found her on the boardwalk [in Duluth]. They think she laid down and went to sleep and the cold got to her.’’

Now housed in her own downtown Minneapolis apartment for 14 months, Nickence advocates for the homeless through HAH, the Homeless Against Homelessness, lobbying legislators.

“Our highest goal,’’ she says, “treat [the homeless] with dignity while they’re alive and give them dignity in death as well.’’