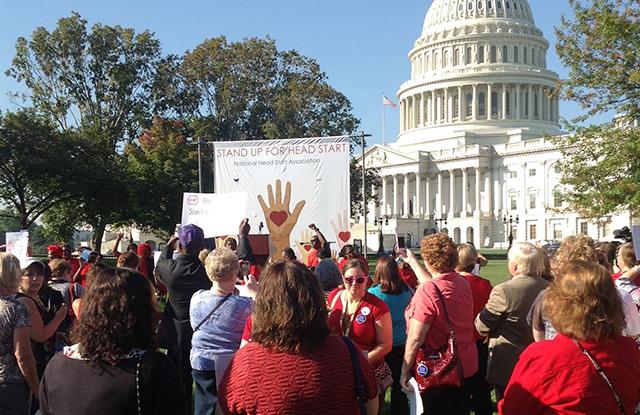 We’ve been hearing about Head Start programs around the country closing their doors because of the partial federal government shutdown.

Already some 20,000 preschoolers from low-income families aren’t playing learning games and songs in Head Start classrooms or getting other educational experiences that prepare them for kindergarten.

Fortunately, that’s not a problem here…yet.

But if the shutdown continues through the end of this month, about 2,500 Minnesota children, too, will face the brunt of the congressional impasse. In coming months that number would grow. Federal funding is paid out to 35 programs across the state at different times.

The Minnesota face on the problem is children like 4-year-old Mikael, who now knows his numbers and the alphabet and is learning to write his name, thanks, says his mother, to the Head Start program in Albert Lea.

Unless, that is, says Chilel, the government lockout drags on through October and prevents the feds from the Nov. 1 refunding of the Head Start program for Olmsted and Freeborn counties in southern Minnesota.

“Without resources, we can’t serve the children,’’ said Sandy Simar, director of the program. Without those federal dollars, her program would cease operations.

Another round of cuts

Already, the program has taken a hit from sequestration cuts that forced a two-week delay in the start of programs this fall and reduced the number of children they could serve. Federal money funds 80 percent of their program with the rest coming from state and local funds.

Lack of funding would mean turning away children who want to learn, not being able to pay 90 staff members and struggling with how to make the mortgage payments on a new facility with 10 classrooms they opened in partnership with Boys and Girls Clubs of Rochester.

Head Start programs in Olmsted and Freeborn counties serve 513 children with more than half coming from families where English is not the home language and whose parents work as housekeepers in the hospitals and hotels and as servers in restaurants, jobs that qualify them as low-income and eligible for Head Start programs, she said.

“Very worried,’’ is how Gayle Kelly, executive director of the Minnesota Head Start Association characterizes the feelings of Head Start directors across the state and country who fear the budget impasse closures will be further complicated by the upcoming congressional vote on raising the debt ceiling on the federal budget.

“We got slammed on sequestration. We’re going to get hit again,’’ Kelly said.

We’d talked in August about federal funding cuts to Minnesota Head Start programs that were projected to reduce the numbers of children able to enroll in the program by as many as 988, though state early childhood education scholarship money restored some positions.

Kelly joined about 500 Head Start supporters rallying Wednesday in Washington, D.C., against federal funding cuts. The effort had been aimed against sequestration reductions but also became a protest against the budget shut-off. Planned visits to the offices of Minnesota’s congressional were canceled because many office staffs were furloughed.

In 2012, $95.99 million in federal money funneled into Minnesota to pay for the bulk of Head Start and Early Head Start programs serving about 17,500 young Minnesotans.

For Chilel, no Head Start has personal repercussions. Head Start teachers and staff have helped her son and her family.

The boy started the program as a 3-year-old and had speech challenges. Chilel says she was concerned because the boy had trouble expressing himself and being understood and that, “he would get frustrated. I was worried about his development.’’

Staff members helped him get the extra one-on-one help he needs to remedy language challenges and to encourage her to keep applying for jobs until she was finally able to land a full-time position as a legal secretary.

Still, with a husband unable to provide financial support and unable to come to the United States from Guatemala, she’s her family’s sole breadwinner, which qualifies them for the program. Chilel supports her two children and an 11-year-old sister.

“My hands are really full,’’ she says, adding she doesn’t have the time, training or patience to tutor her son. Chilel, who sits as a parent member of her Head Start policy council, fears without Head Start her son would regress.

“It’s not just mine, it’s lots and lots of other families” who would suffer the loss of Head Start, she says.