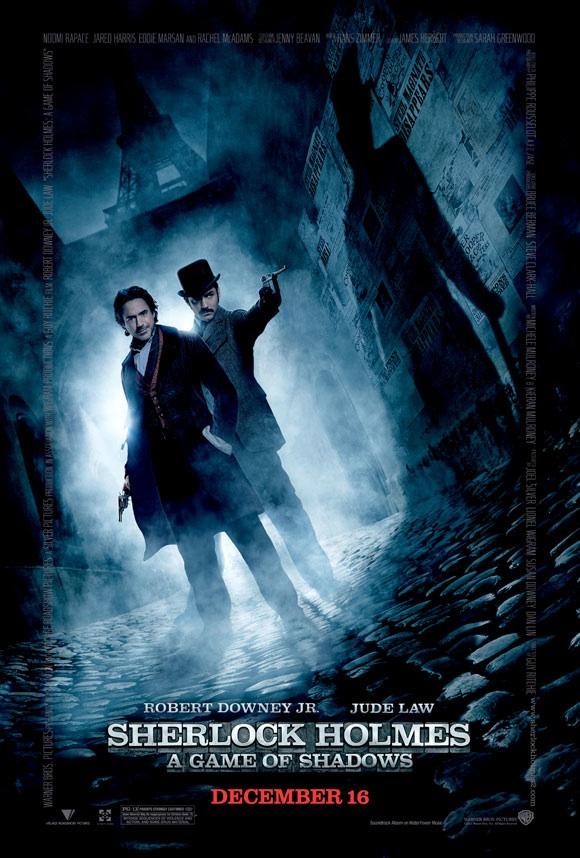 When Sherlock Holmes traditionalists think of their beloved sleuth’s adventures, I’m guessing that images of explosions, gunshots, and bone-shattering fight scenes don’t dance in their heads. The Sherlock Holmes as created by the late author Sir Arthur Conan Doyle was a detective in late 1800s London who solved mysteries with great attention to detail, deduction, and meditation (with a little help from opium). However, in director Guy Ritchie’s film, Sherlock Holmes: A Game of Shadows, the aforementioned action movie staples run rampant, but in a good way. As in Ritchie’s 2009 film, Sherlock Holmes, this sequel provides magnificent acting, smart writing, and eye-candy cinematography. Ritchie definitely scores again; this film will likely send you home smiling like Holmes does when he’s discovered a new lead in a case.

The Tuesday Movie Men saw this film at our frequent haunt, the Carmike Wynnsong 15 in Mounds View. As usual, the concessions staffers were courteous and swift with our orders: $1 pop and $1 popcorn, a deal that’s offered every Tuesday. With snacks in hand, we made our way to auditorium number ten, not one of the two mammoth rooms in the building, but still one that has a mid-sized screen with clear digital projection.

The film opens in 1891 England, presumably a short time after the events of the first film (the case of Lord Blackwood). A lot has changed. Holmes (Robert Downey Jr.) is knee-deep in a case in which all signs point to a new nemesis, Professor James Moriarty (Jared Harris), the boss of Holmes’s occasional romantic flame, Irene Adler (Rachel McAdams). Holmes’s best friend, Dr. Watson (Jude Law) is about to be married to his fiancée, Mary (Kelly Reilly). The impending wedding is a source of emotional turmoil for Holmes; he wants his friend to be happy but fears the cold loneliness that will take Watson’s place in their apartment at 221B Baker Street.

Holmes’s case involves looking into the mysterious assassinations of arms dealers around the world. With each new murder, Moriarty gets his foot further in the door of dominating the global weapons factory market, either by eliminating his competition or inheriting the deceased’s ownership. Each new death, therefore, becomes another piece of Moriarty’s master plan to start a World War and profit from it. Doing the dirty work for Moriarty is his trusted aide, former Colonel Sebastian Moran (Paul Anderson). Holmes finds that he doesn’t have to tackle his case alone, either. In addition to Watson, Holmes gets help from his politician brother Mycroft (Stephen Fry) and a fortune telling gypsy named Madam Simzo Heron (Noomi Rapace).

With a wider array of principal characters than those in 2009’s Sherlock Holmes, I was nervous that Downey Jr. and Law would not get enough face time in the sequel. However, screenwriters Michele Mulroney and Kieran Mulroney doused my fears by giving the dynamic duo plenty of time together to joke, shoot, stop assassins, and run. The writing once again consists of a mixed blend of emotions that goes down smooth. Humor plays a large part in the dialogue, as Downey Jr. is always quick to throw in sharp observations about those around him in a self-assured manner that makes you want to guffaw. But just when you think Ritchie has put together a pure comedy, a dramatic moment swoops in and you get to hear the darker side of Holmes as he speaks about his life without the usual smile. Making a reliable action-comedy-drama in a PG-13 setting is no easy task, but Ritchie and his team balance emotions well here.

Downey Jr. leads a stampede of colorful and unique acting that’s likely to woo you one way or another. With his ripped body and street-smart fighting skills, Downey Jr. continues to be a likeable Holmes for a new generation. His face is a constant pool of intensity; whether he’s smirking or stony faced, you get the sense that a brilliant detective’s mind is tirelessly churning behind those walls of flesh. Perhaps not everyone is a fan of Downey Jr.’s manic interpretation of Holmes, but I think he’s the right fit for a Ritchie film, and a bright cinematic presence that draws waves of audiences to the theater like bugs to a porch light.

As Holmes’s right-hand man, Law as Dr. Watson is indispensable to the film’s success. Law is great at amplifying the hilarity of Downey Jr.’s antics. Seeing Holmes do something funny like dress as a woman is entertaining, but that enjoyment is heightened when Dr. Watson steps in, sees what Holmes looks like, and gapes in bewilderment.

To be the villain in a Sherlock Holmes sequel after Mark Strong stole scenes as the serpentine Lord Blackthorn in the first film is no easy task. I guess nobody told Jared Harris. His performance as Holmes’s nemesis Professor Moriarty is worthy of applause. There was a lot of media speculation that Brad Pitt was going to play Moriarty; some even believe he voiced the character in the first film. Being that Pitt is a cinematic legend, many people might have groaned when it was announced that a guy named Harris was penciled in as the villain instead. Well, it turns out Harris is no chump, either. The man brings a diverse business background to the table, having played Dr. Ashford in Resident Evil: Apocalypse; a recurring role as Lane Pryce on AMC’s Mad Men; and a regular role on FOX’s Fringe as David Robert Jones. Harris mashes up multiple character traits from his past to make the ultimate villain. He plays Moriarty as a smug man, with his mouth twitching at the corners, a smile always at the ready because he’s going to pull a fast one on the world and knows that no one can stop him. The real treats of the movie are when Holmes and Moriarty go head-to-head. Interesting things are said, similar to a mental game of chess.

Two other supporting roles are memorably played. One is Stephen Fry as Mycroft Holmes. Fry is the biggest comic relief, not only from his comfortableness walking in the nude even in front of Watson’s wife, but also from his infectiously joyful persona.

The second is Noomi Rapace, the original girl who had a dragon tattoo, played with fire, and kicked a hornet’s nest. Rapace isn’t the firecracker clone of McAdams’s Irene Adler I imagined she would be. Ritchie instead lets Rapace be her own woman, one who can handle a pair of knives with vicious accuracy and also get nervous when her life’s on the line.

The only noticeable stain on Ritchie’s sleuth sequel could have been prevented in the editing room. A lot happens in this movie. Unfortunately, sometimes a little too much happens. Especially in the action scenes, the camera gets cut-happy, changing angles and scenes faster than a lens set to “shutter.” If once in a while Ritchie just let the camera stick to his characters longer than five seconds, he’d give his viewers’ eyes a needed rest.

If you like a lot of comedy and action with your mystery, or if you plain just like Robert Downey Jr. and Guy Ritchie, then Sherlock Holmes: A Game of Shadows is the movie for you.

I give it four and one-half stars out of five. In grade form it gets an A-.

Sherlock Holmes: A Game of Shadows is rated PG-13 for intense sequences of violence and action, and some drug material. It has a running time of 2 hours and 8 minutes and was released to theaters nationwide on December 16, 2011.