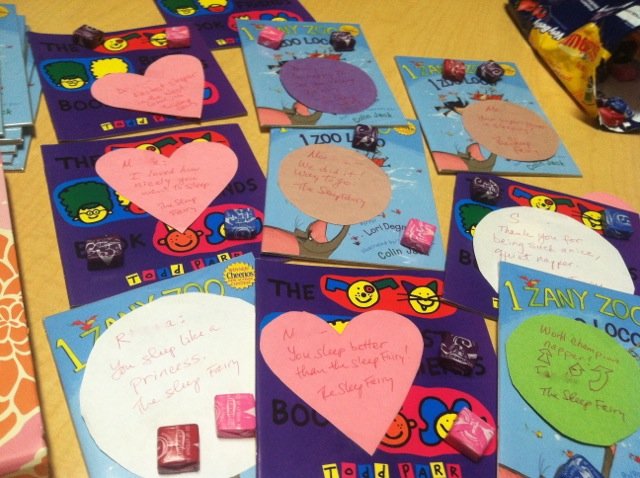 For any parent who’s struggled with getting one balky four-year-old down for a nap, the prospect of bedding 17 of them at a time in the same room might not seem like a fun way to voluntarily spend one’s afternoon.

But it is. Half my job on the preschool afternoon shift involves the cultivation of somnolence: preparing kids for the nap, inducing calm, dampening distractions and disturbances, and doing chores during the miraculous time when everyone is asleep.

Sometimes it means I get to be The Sleep Fairy.

It’s perhaps the only assignment for which I am professionally qualified.

The Sleep Fairy is a minor deity, equivalent to, say, an offspring of Santa, the Tooth Fairy and Dr. Seuss. (Yes, we were warned that such marriages would become possible in Minnesota after August First!)

S/he tends to visit following several days of nap anarchy. The teacher will prepare the class ahead of naptime, letting them know The Sleep Fairy is enroute but will only visit them if everyone is asleep—or at least remaining quiet with their eyes closed. Once the lights are turned down, periodic reminders are aimed at the young and restless.

And after all is calm, The Sleep Fairy goes to work, preparing treats and writing notes to the children. This week the fairy brought books and Starbursts and left personal notes like:

M—-: Your superpower is sleeping!

The technique works because it’s employed sporadically. (Every day can’t be Christmas.) The treat is given to the children only when the parents pick them up at the end of the day. The timing creates an opportunity for parental praise in support of a good naptime—and may suggest the use of positive reinforcement later when the mom or dad has three rambunctious kids of different ages up in their room that night.

It may. But dreaming’s my job. After all, I’m The Sleep Fairy.