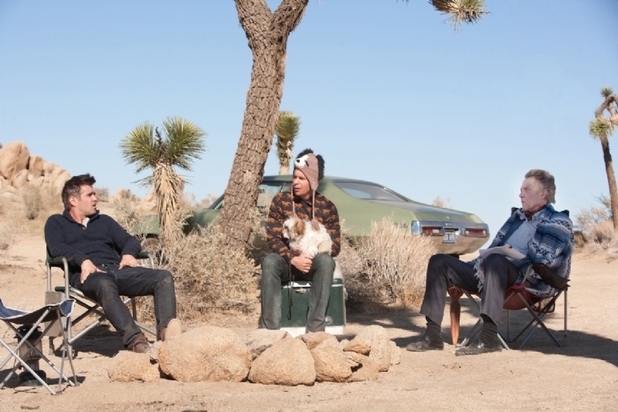 Writer/director Martin McDonagh’s Seven Psychopaths contains enough spilled blood to fill more than a dozen of those orange Home Depot buckets. It’s also one of the most intelligent and funny movies to come out in the past decade. Starting as a dog kidnapping gone wrong before expanding into its own vast creative universe where both meta-humor and original ideas thrive, this film can’t be pinned down to one genre because it won’t allow itself to be confined to such limitations. I’ve never seen anything quite like it.

Colin Farrell starred in McDonagh’s sole previous full-length feature film, In Bruges (2008), so it’s only natural that he’s the central character in Seven Psychopaths. The Dublin native plays Marty, a screenwriter who’s struggling to get past the title of his latest story, which is aptly named Seven Psychopaths. Marty’s really feeling the pressure of writer’s block, and so he retreats to the liquor cabinet to mellow his nerves, a habit that consistently irks his girlfriend Kaya (Abbie Cornish). Trying to help Marty stay focused on his work is goofball friend Billy (Sam Rockwell). Marty’s not too keen on taking advice from a man who makes a living kidnapping dogs and returning them to their owners for the reward money. Billy co-runs the devious business with older friend Hans (Christopher Walken), a deeply religious man who needs the money to pay for his wife Myra’s (Linda Bright Clay) cancer removal surgery.

Well, when you kidnap people’s dogs on a daily basis, you’re likely to run across an angry owner every now and then. That’s exactly what happens when Billy steals Bonnie, a Shih Tzu who belongs to Charlie (Woody Harrelson), a leader of a local mob who likes to solve his problems with guns. Marty originally thought dealing with an unfinished manuscript was too nightmarish to handle, but his outlook on life’s difficulties gets a cold wake-up call when he finds himself caught in the middle of revenge-seeking mobsters and trouble-riddled friends.

While on paper Seven Psychopaths may read like just another action-comedy, it’s far from the norm of the gun barrel-blazing genre. In fact, McDonagh makes a point of including satire in nearly every scene, gradually inserting more throughout the film so by the conclusion his characters are swimming through parody. McDonagh in particular pokes fun at gun-happy action movies. When Charlie tries to shoot someone after an interrogation, his handgun won’t fire because it’s jammed; a cohort asks Charlie why he doesn’t just get a gun that works, and in response Charlie says he won’t get a new gun because he likes the way the handle feels on his jammed gun.

As fun as the self-referential humor is, it thankfully doesn’t form the bulk of the movie. There is plenty of original narrative present to more than satisfy moviegoers looking for a flick aimed at adults that isn’t a remake of an older movie or an adaptation of a comic book. The main plot involving Marty and his friends trying to stay one step ahead of Charlie’s gang moves forward in quick and unexpected ways. Just when you think you have an idea of what’s going to happen next, McDonagh inserts a plot device like, oh, say, a bullet to someone’s head, that simultaneously shocks you and sets the plot on a whole new set of tracks. The opening scene alone, featuring two hit men chatting about shooting someone in the eyeball, displays McDonagh’s abrupt style perfectly (keep an eye on the background and you’ll see what I mean).

The characters are all well cast, with each actor and actress realizing the potential of their layered role and embracing zany mannerisms to further enhance McDonagh’s solid story. Stealing the show as perhaps the most psychotic lad of the lot, Sam Rockwell is unforgettable. He puts on a perky persona whilst offering up ridiculous jokes and thought-provoking insights into trivial matters, and yet he’s still able to subtly convey Billy’s masked vulnerabilities. Rockwell’s done some great stuff in his career, but his performance here should propel him to another level of demand in the film community.

Surely contributing the most to the dramatic elements of the film, Walken shows he’s still got at least half a tank of gas left and no intention of stopping when the empty light comes on. Through Hans, Walken communicates a tender, non-violent guy whose main objectives in life are to love his wife and be there for his friends. Push him, though, and he can snarl like a rabid dog, as Charlie finds out in a tense scene that takes place in a hospital waiting room.

Marty is certainly the most level headed of the group, despite being an alcoholic, so Farrell doesn’t get as wacky as he did in Horrible Bosses, where he played a cocaine-snorting, balding jerk-boss. Farrell’s still fun to watch; his bewildered reactions to the increasingly absurd situations he falls into are believable. You can’t help but feel bad for the guy when he gets splattered with someone else’s blood and then pukes on himself.

McDonagh has without a doubt created a film with cult status written all over it. Even though it has already dropped out of the top ten United States box office rankings at the time of this writing (one week after its initial release on October 12), Seven Psychopaths will be viewed and discussed by die-hard film fans twenty years down the road because it’s a unique viewing experience. McDonagh’s achieved the rare feat of crafting a near-perfect dark comedy. He somehow combines witty jokes, shocking violence (I’m talking throat-slitting, head-exploding, you-may-want-to-look-away violence, folks), and an eclectic set of characters to create a one-of-a-kind film in every sense of the phrase. I can only give this film a slight half-point off because not all of the comedy is as funny as it aims to be, but the effort on McDonagh’s part to reach lofty expectations is much appreciated.

Seven Psychopaths is rated R, has a runtime of 1 hour and 49 minutes, and was given a limited United States release beginning October 12, 2012.