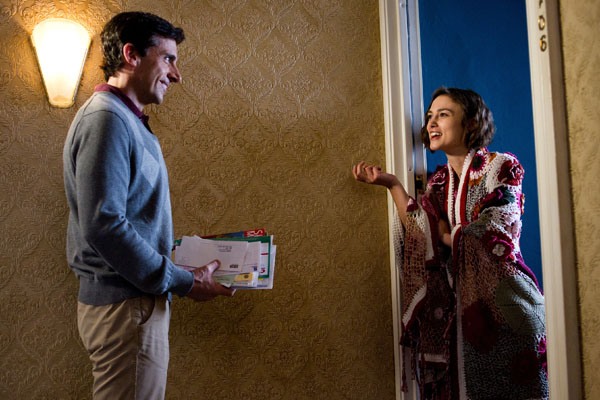 We’ve seen apocalypse movies that focus on brave batches of humans trying to ward off Earth’s total annihilation in movies like Armageddon (1998) and Contagion (2011). In Armageddon the threat to humanity was an asteroid the size of Texas. In Contagion, infectious diseases were the destructive forces seeking to smother the lives of Earth’s inhabitants. With her directorial debut, Lorene Scafaria centers her story in an apocalyptic setting by way of Armageddon, but does something in that setting that neither Armageddon nor Contagion have done. She shows what the everyday, non-saving-the-world people on Earth do in their final days before the world’s end. It’s a fascinating new take on a popular genre that’s well worth your time.

We open on Dodge (Steve Carell) and his wife Linda (Nancy Carell) sitting in their car listening to the radio. The DJ announces that the space shuttle Deliverance has just exploded, killing all twelve members onboard and deflating Earth’s last hope for survival against the impending asteroid Matilda. Before giving way to some tunes, the DJ mentions that there are 21 days left to live. Linda doesn’t hesitate. She jerks out of the car and sprints away into the night. This isn’t a confidence booster for Dodge, who’s had trouble with women since being dumped by his high school sweetheart, Olivia, over eighteen years ago.

Dejected and dazed, Dodge goes to Warren (Rob Corddry) and Diane’s (Connie Britton) house for an end of the world party. These two people claim to be Dodge’s friends, but Dodge seems distant in their presence, almost wary of their overt reactions to the bad news about the world and his recent breakup. At the party, Diane tries to set him up with one of her friends because she believes nobody should face the apocalypse alone. Dodge doesn’t know what he wants, though, and thinks that dying alone might be his most pleasurable option.

So he flees the party. It’s probably good that he left when he did, too, because heroin was being passed around, Warren was offering moral support to a girl while she downed vodka, and a drunken man named Roache (Patton Oswalt) was talking about how incest is definitely an option in life’s final weeks. Scafaria, who also wrote the screenplay, uses this party—a shrine to debauchery—to display the wild yet realistic reactions people are having to their impending deaths. Everyone knows they are going to die at roughly the same time three weeks in the future. It’s a hell of a brilliant concept because Scafaria can introduce us to a wide range of characters with wildly different viewpoints on how to spend their final days.

Dodge ends up running into a lot of these people during Earth’s final chapter. In a last-ditch effort to attain happiness, Dodge sets out on a road trip to New York to see Olivia after finding a three-month old letter she wrote to him in which she proclaimed that her love for him was still fresh. Joining Dodge on his quest for lost love is his record loving, sneaker and skirt-wearing neighbor, Penny (Keira Knightley), who accidentally got Dodge’s mail and never returned it until now. Helping Dodge is Penny’s way of gaining atonement.

Their adventures on the road are similar to Dodge’s experience at the heroin party. They meet all sorts of people who are doing all sorts of things in anticipation of the big bang. There’s Speck (Derek Luke), a muscular survivalist who had his basement revamped into a bomb shelter with 12-inch titanium walls that are equipped with racks of machine guns and rifles. And then there’s Trucker (William Peterson), a man diagnosed with cancer who has hired an assassin to kill him. Memorable appearances by T.J. Miller, Gillian Jacobs, and Bob Stephenson round out the cameo-like supporting cast, jumping into Dodge and Penny’s way long enough to offer big laughs and deep insights.

When they’re not stumbling into other characters, Carrell and Knightley share an easygoing relationship on the surface that’s pulsing with romantic desire underneath. They sweetly compliment each other. Carrell plays Dodge as a depressed, cynical man who is bitter about his past relationships and doesn’t have the patience to start a new one. He’s a very real, down-to-earth guy. Fellow reviewer Zach Tollefson reminded me that Carrell’s performance in this film is a large departure from his over-the-top silliness in television’s The Office. Carrell shows he has range, which only makes me more excited to see him play the unconventional (for him) roles of abusive stepfather (The Way, Way Back, 2013), and real-life schizophrenic murderer John E. du Pont (Foxcatcher), in his respective upcoming films.

Opposite Carrell, Knightley’s Penny is always on the balls of her feet, practically bouncing with the excitement of helping her neighbor rekindle an old flame. Even with the end of the world being nigh and her family an ocean away in England, Penny is optimistic that everything will work out in the end. Knightley is superb and looks like she had a lot of fun on this project.

I love the big-budget end of the world extravaganzas like Armageddon; but I also enjoyed this quiet little apocalyptic movie. Even though it was made on a relatively low budget of $10,000,000, the dialogue is as richly delivered as explosions in a Michael Bay film. Seeking a Friend for the End of the World is different, and its dark comedy style will take some getting used to, but it’s deserving of your attention.

Seeking a Friend for the End of the World is rated R, has a runtime of 1 hour and 40 minutes, and was given a wide release in United States theaters on June 22, 2011.