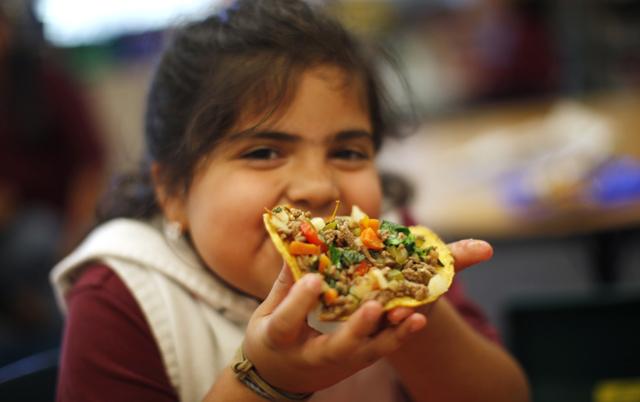 The U.S. House will soon consider $16.5 billion in cuts to nutrition assistance programs, and I can’t help but think about hungry kids.

You know those “kids eat free” signs we see from time to time at area restaurants? Well, they could be tacked permanently to lunchroom walls in schools with high numbers of poor kids.

Which got me wondering: Do these very children lack for food in the summer months? Are kids out there going hungry or eating poorly because financial resources are scarce?

Nine months of the year when school bells sound some 375,000 Minnesota kids from low- income families receive either free or reduced-price meals daily through the National School Lunch and School Breakfast programs, courtesy of the federal government and taxpayers, with numbers swelling.

Yet only about 20 percent of those hungry school kids sign on to the similar federally funded Summer Food Program.

“My assumption would be that there are’’ kids going hungry, says Nicole Barron, nutrition services business manager for the Minneapolis Public Schools and an overseer of the district’s effort to dish up healthy servings of banana muffin loaves, pineapple spears, meat, veggies and milk, both in summer and during the school year.

Their actions are part of a massive lunch-packing effort going on all over Minnesota where last year 1.9 million-plus free meals were handed out around the state through the summer meals program.

Kids under 18 went to 539 meal sites sponsored by schools, colleges, non-profit organizations, cities, parks and recreation departments and faith-based organizations, according to Jenny Butcher from the Minnesota Department of Education.

“We want to help bridge the nutrition gap during the summer,’’ explains Butcher, the state program coordinator.

She says the number of free meals has swelled by more than 14.5 percent each of the last two years, in part because of the state’s efforts to recruit meal sites. The Department of Education administers the Summer Food Program locally for the U.S. Department of Agriculture.

Yet the gap remains between the numbers of kids getting bargain lunches during the school year and those on the program during the summer.

Some child advocates theorize children may be home alone while parents work, that families don’t know the meals are available or that there other barriers to kids going to meal sites. They worry about the long-term repercussions of inadequate or unhealthy diets on child development and learning.

In many rural areas poverty levels are significant, says R. Newell Searle, vice president of Second Harvest Heartland, a hunger relief organization and food bank. Yet tight finances have put the squeeze on summer school and other summer programs that used to house meal sites. In addition, there are transportation problems in getting needy children from their homes to meal sites.

The private sector, too, steps in to help.

In Minnesota in summer, some families turn to emergency food shelves operated by religious groups, charities and others to fill growling stomachs.

Unfortunately, donations this time of year are typically slow.

“Food shelves get really stretched in summer. Their supplies are low,’’ explains Sara Nelson-Pallmeyer, director of Minnesota FoodShare. That’s the group that directs a massive March food drive that helps stock 300 emergency food shelves around the state and will later this month be receiving some corporate donations to pass along to bolster emergency food supplies.

Enter incentive. Arna Yetter, executive director, of Open Your Heart to the Hungry and Homeless, says she’s been hearing from food shelves that summer giving is slow.

So the agency, founded by employees of the state of Minnesota 25 years ago, is offering $100,000 in Food Challenge Grant money. The more money individual food shelves raise, the larger portion of that $100,000 pie they’ll receive, Yetter explains.

“With only so many dollars to give away, we wanted to have the most impact possible,’’ Yetter says.

Then there’s innovative VEAP (Volunteers Enlisted to Assist People), where volunteers pack up lunch bags with two weeks supply of “kid-friendly” lunch makings at a time for 600 kids.

Parents or guardians of children enrolled in the program are income-qualified, meaning they make no more than 200 percent of what the federal government designates as poverty. The agency serves low income people in Bloomington, Richfield, Edina and a small part of South Minneapolis.

With a budget of $18,000, those bags don’t hold much in the way of fresh foods, staff says, but they do balance carbohydrates, proteins, fruits and vegetables. Cost-saving purchases are made through Second Harvest Heartland and funded through community donations.

A broad network of other agencies are involved in the hunger battle, including The Greater Twin Cities United Way, which convened the Twin Cities Hunger Initiative, a collaboration of 15 people representing various branches of the emergency hunger-relief system from food banks and food shelves to meal programs, the state, advocacy organizations, faith communities and food producers.

Their mission is “close the meal gap” by 2015 in the metro area.

Anyone looking for food assistance or summertime lunch sites for kids, can check with United Way or Second Harvest Heartland or Minnesota FoodShare. Those in need can dial 211 from a landline or punch in 651-291-0211.

Those willing to help may donate food or money to their local emergency food shelf, Nelson-Pallmeyer suggests, including donating fresh produce from their gardens. Better yet, she urges, the concerned might contact their U.S. senator or Congressperson to protest proposed cuts to nutrition programs aiding the poor.