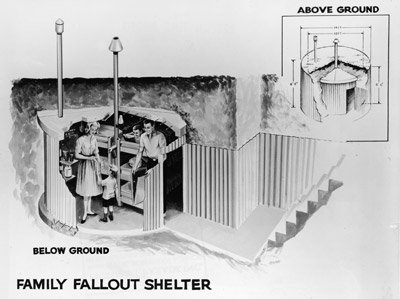 As most of us know, August 5 was National Night Out, an annual event that promotes the value of getting to know who lives next door as a way of preventing crime in your neighborhood. August 6 is the 69th anniversary of the bombing of Hiroshima. Is it possible there’s a subterranean connection between the two?

All of my life, this country — the most secure and prosperous in human history — has lived in a state of fear actively manufactured by our government and mass media. When I was young it was a fear of nuclear war so pervasive and intense that it all but served as a self-fulfilling prophecy; until I was well into my 20s, the sound of a siren in the night could cause my heart to start palpitating.

With the collapse of the Soviet Union, and the lapse of just a few years, fear of the Russians gave way to fear of terrorists (interestingly enough, though, not fear of home-grown rightwing terrorists — there was no massive crackdown on militia/Aryan Nation types in the wake of the Oklahoma City bombing and we still tolerate the presence of the KKK on our soil). Now we have zombies, undocumented children from Central America, the war on Christmas, the “War on White People” recently uncovered by Alabama representative, Mo Brooks, etc., etc., etc. to haunt our imaginations and rob us of sleep. And underneath it all, a continuing thread that dates back to the first European settlements in North America, the fear of dark people, those hordes of mindless savages who just can’t seem to accept their dispossession and exploitation at the hands of God’s Chosen People.

Wouldn’t it be nice if the idea of getting to know your neighbors and promote a sense of community and connection were perceived by us as an end in themselves — things to pursue because of the way they enrich our lives rather than protect us from the bad guys? If we were to acknowledge that fear has a way of generating the very things we fear, that signs announcing the presence of a home alarm system tend to tipoff the bad guys (who certainly do dwell among us) that you own things worth stealing, that keeping a gun under your pillow means an increased likelihood that, at a minimum, you’ll wake up with a stiff neck even if you or some member of your household don’t manage to shoot yourselves by accident?

Of course, such an evolution in consciousness would undermine not just the national security state with its massive profits for the few but also the whole anxiety-ridden, zero sum mentality that drives consumer capitalism. If we were to embrace the undeniable fact that, while on the level of material existence, we live in an economy of shortage in which there is only so much food, land, and property to go around, on the level of spiritual existence we live in an economy of infinite abundance in which love and generosity breed more love and generosity; that we have not been condemned to struggle for scraps in the midst of a famine but invited to a banquet whose bounty increases each time we sit down and pull up a chair, we’d all be a lot happier and more relaxed. On the other hand, that would be really bad for the economy.

But now, get back to the latest bulletin about the Ebola outbreak in Africa and an update on the search for that missing airplane.