In the case of domestic abuse, time is of the essence—the victim needs to be able to leave the abusive situation as quickly as possible. But what if something’s holding you back? What if you’re worried about what might happen to your beloved dog or cat if you leave? 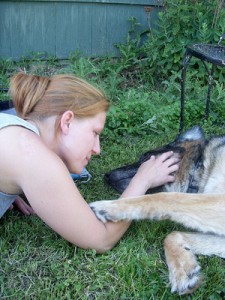 Left: A woman and her furry friend (Photo courtesy of MN AFAS)

“There is a bond with people and their companion pets that makes them particularly vulnerable as a way to manipulate and control the victim, whether it be a child, a partner or an elderly person,” says Jane Hunt of the Minnesota Alliance for Family and Animal Safety (MN AFAS). “Threats to harm pets are powerful and common ways to keep victims of family violence from talking about the abuse or seeking shelter from the abuser. Leaving a pet behind when entering a battered women’s shelter or other safe option can be an unthinkable barrier when considering past abuse or threats made to that pet.”

Jeanette Wiedemeier Bower, of Minneapolis Animal Care and Control (MACC), elaborates on the issue. “There is a strong link between domestic violence and animal safety. When there is domestic violence in the home, there is a strong probability that the pet is being abused, too. Perpetrators use the pet as a threat—‘if you leave me, I will kill the dog.’ The research shows that 48 percent of women will not leave a violent relationship if they fear for their pet’s safety.”

That’s why MACC has partnered with MN AFAS since 2010 to provide no-cost kenneling for victims of domestic violence. If a victim of domestic violence needs to escape to safety and cannot bring their pet with them, MACC will kennel the dog or cat at their facility in an area not open to the public, then place the pet into a foster program through MN AFAS.

Jeanette reflects on one family that needed to leave a violent situation and couldn’t bring their dogs along immediately. “They came to MACC to do an intake visit,” she says. “The little girl was really shy, but curious. Mom was doing the paperwork with the officer and I gave her a coloring book (a dog book, of course). That family was so connected to their two dogs that they came back every day over the week to visit and love on their dogs. In time, we launched the dogs to a rescue group, and in about three months the family got into better housing and could reclaim their dogs. It was a touching story.”

A pioneer in the area of caring for pets during tough transitions is Pet Crossing Animal Hospital, which has been working with Cornerstone Women’s Shelter to shelter animals in violent situations since the late ’90s. Pet Crossing’s Dr. Kate Knutson explains that the program began when one of her clients, a volunteer for Cornerstone, relayed a story about a victim of domestic violence who refused to leave her pets with her abuser, who threatened to kill them. As a result, she was severely beaten and one of the pets was killed. “Abusers often use pets or kids as ways to keep their victims at the residence,” Dr. Kate says. “Kids can be taken to shelters, but unfortunately, four-leggeds often have to stay in the abusive situation and frequently are tortured and killed.”

Dr. Kate told the Cornerstone volunteer to call Pet Crossing the next time someone wanted to go into shelter and was afraid of leaving their animals behind. “The next week we had a call from the shelter. A woman experiencing domestic violence needed to go to Cornerstone but did not want to leave her dog. And so the relationship began.”

Unfortunately, there are very real security risks for the people providing and receiving these services. “In the very early days, no one knew where the pets were going except for a few trusted volunteers and the director of the shelter,” Dr. Kate says. “We did not want our staff to be at risk for physical harm if an abuser discovered where the pets were being held.”

Despite these risks, Pet Crossing keeps these animals as long as they need to. They provide them with food, water, vaccinations and lots of love. “[These pets] experience varying amounts of post-traumatic stress, so much of the work has been with behavioral modification,” Dr. Kate says. Pet Crossing sends weekly updates and pictures to Cornerstone for the family, and Cornerstone staff will often pick up the pet for a visit to the shelter so everyone can see each other.

In the event that a pet is not able to return to her person, Pet Crossing will adopt the animal out to a loving family. Dr. Kate remembers one such case where a woman at Cornerstone knew she had to move far away from her abuser, and would need to have her dogs re-homed. Though there is generally no contact between Pet Crossing and the sheltered pets’ families, the woman wanted to thank Pet Crossing and an exception was made. “Seeing the love between this woman and her dogs was one of the most poignant moments I have experienced,” Dr. Kate says. “It had to have taken all her courage to let these two dogs go. They were obviously so precious and important to her well being, and she to theirs. They were the only treasures in her life and she chose to let them go. Her leaving the dogs was one of the most selfless acts I have ever witnessed.”

MACC’s Jeanette echoes Dr. Kate’s admiration: “Our staff is overwhelmed with joy when a woman comes in, since it is the toughest decision to make, leaving the dog or cat behind. But when we learn how things turn out over time, it’s all worth it.”