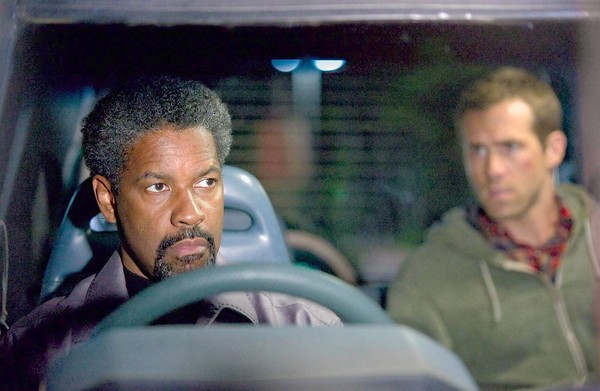 Ryan Reynolds and Denzel Washington, two giant names in the movie industry, face off in director Daniel Espinosa’s new action movie, Safe House. Though it isn’t a perfectly well rounded movie, Safe House has a lot going for it, primarily in the acting and action departments. Whether or not you agree with the screenplay, your knuckles are sure to be white from gripping your armrest the entire movie.

Reynolds is a young CIA agent who has been the housekeeper of a safe house in Cape Town, South Africa, for twelve months. Though eager to move on to better things, Reynolds is told by his supervisor (Brendan Gleeson) that he still needs to gain experience where he is. So Reynolds returns to answering phone calls and bouncing a rubber ball against the wall of an empty interrogation room.

That room doesn’t remain empty much longer. Reynolds unexpectedly receives house- guests in the form of an interrogation team and their prisoner: Denzel Washington, a former CIA-agent gone rogue. After the safe house comes under siege, Reynolds becomes the sole guard of Washington, and he embarks on a mission to keep his prisoner alive until he can hand him over to other U.S. authorities. Along the way, however, Washington plants a seed in Reynolds’s mind that someone in the CIA ordered the attack on the safe house.

This is a confident, well-acted movie. Reynolds is wonderful in a departure from the role of sarcastic romantic charmer that he’s played in previous movies. The Canadian actor uses body language to show that he’s in over his head. Reynolds rubs his lips, puts his hands on his head, and darts his eyes to and fro, constantly reminding us that he is not sure that the moves he makes are the right ones.

Washington, as always, is solid. Just as he did in past movies like Remember the Titans and John Q., Washington switches between being amused at the events unfolding before him, and being totally ticked off at people. His turn as a rogue agent is creepy. Even with gun-waving enemies waiting for him around every corner, Washington smiles calmly and even laughs at Reynolds from time to time. Every time he flashed his pearly whites, I shuddered a little because it was so unnatural in the moment, making it all the more disturbing.

The fight scenes are another disturbing element of the film. They are choreographed with a raw, realistic feeling in mind. The hand-to-hand combat is fluid in some scenes, and sloppy in others. This is good, however, because in real-life fistfights every punch isn’t well placed and things don’t always go according to plan. One scene in particular really shook me. In this scene Reynolds gets in an unplanned fight to the death with another character. A coffeepot, shards of glass, and forearms are used as weapons. There was nothing comical or cartoonish about this fight scene. It demanded your attention; it was a believable, desperate fight for survival.

Espinosa keeps the film’s progression fast but cohesive. Every scene is rich with the possibility of something big happening. You can sense the buildup to an action scene like an old timer can sense a storm coming. The editing, done by Richard Pearson, also benefits scenes that involve car chases or shootouts. Pearson cuts to different people swiftly, but he lets the camera linger just long enough for you to take in everything that is happening in a frame.

Safe House follows the basic formula for a CIA movie. It has a lot of action, agents running all over the place, an explosion, and a double-cross that nobody’s supposed to see coming. This is where Espinosa and screenwriter David Guggenheim become uninteresting. I’ll admit, I did gasp when the inevitable double-cross was revealed, but I also had seen it coming since the film’s twenty-minute mark. I think a different angle to the CIA movie formula would have made this movie even better. The double-cross aspect in this film is a sub-plot that seems juvenile and wasteful in the presence of such memorable acting.

Safe House succeeds in keeping your eyes riveted to the screen and your butt plastered on the edge of your seat. Hell, you might even find yourself sitting on the floor amid soda stains and popcorn kernels when it’s all said and done. What Safe House lacks in originality, it more than makes up for in stellar performances and deadly duels. Bring an extra shirt, because you’re likely to sweat through the one you wear into the theater.

I give Safe House four stars out of five, in other words, a B+.

Safe House is rated R, has a running time of 1 hour and 54 minutes, and was released nationwide on February 10, 2012.