The latest numbers from Connect Minnesota surveys are out – here are some of the highlights:

I understand that the population density (and other factors) make it difficult to serve these areas – but without broadband who will they attract? Hopefully the Minnesota Broadband fund will help color these maps differently!

Kittson Count’s access decreased. Apparently that is because one of their providers reported their coverage differently this time around. In the past they have reported speeds of individual towers’ some of which meet the 10M/6M definition of broadband. This time they reported ALL coverage the same as what they advertise and that happens to fall into the 10-24.99Mbps/3-5.99Mbps NTIA speed tier. So the entire territory was reported at the same speed.

I think Connect MN does a good job with mapping, but it’s one draw back of having the provider self-report. It leaves the interpretation of questions up to the individual filling out the forms. (True for any survey!) 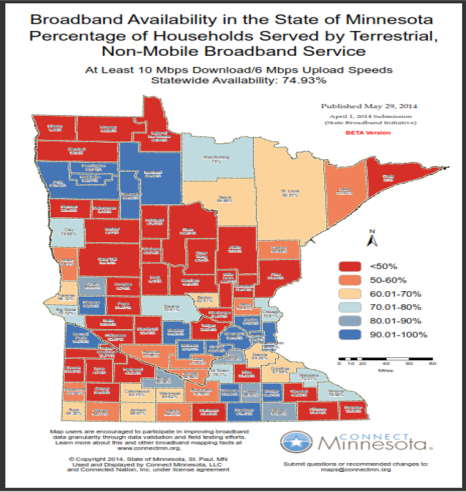