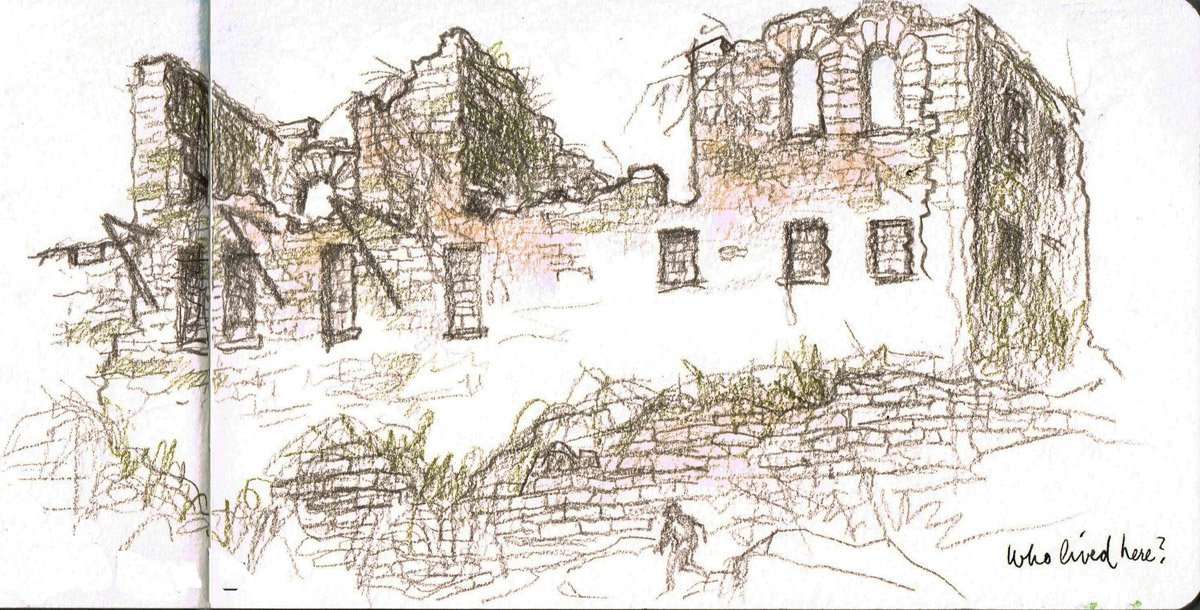 ‘My name is Ozymandias, king of kings:
Look on my works, ye Mighty, and despair!’
Nothing beside remains. Round the decay
Of that colossal wreck, boundless and bare
The lone and level sands stretch far away.”

I love drawing ruins. Ruins are lots of fun to draw and paint. Ruins have way more character with outlines that are all gnarly so they can be sketched with wiggly, jagged lines. The weathered stones and rusty iron are best rendered in muted earth tones; iron oxides, sepia and shades of grey. There is mystery, history and the drama of life and death locked up inside the tumbled rocks, charred beams and twisted iron of wrecked buildings awaiting the artist’s pencil, pen and brush to tease out the timeless tale of civilization’s proud, built structures yielding to the unrelenting millstone of nature that grinds buildings into dust.

But I live in Saint Paul, not Rome like Giovanni Piranesi. We don’t have romantic ruins of ancient temples, colosseums, forums or aqueducts. When buildings get old and decrepit in Saint Paul, they knock them down and replace them with a parking ramp or another building no artist on or off his or her meds would be interested in sketching . There are a few ruins in Saint Paul that have not yet been leveled by the wrecking ball – here’s some sketches by Roberta Avidor and myself (click on the sketches to make them bigger).

The following two sketches, the first one by Roberta is a classic ruin that can be viewed from West Irvine Avenue, a steep switchback street behind the mansions on Summit Avenue. We have no idea what this building was or how it became a ruin. If you know, let us know in the comments. 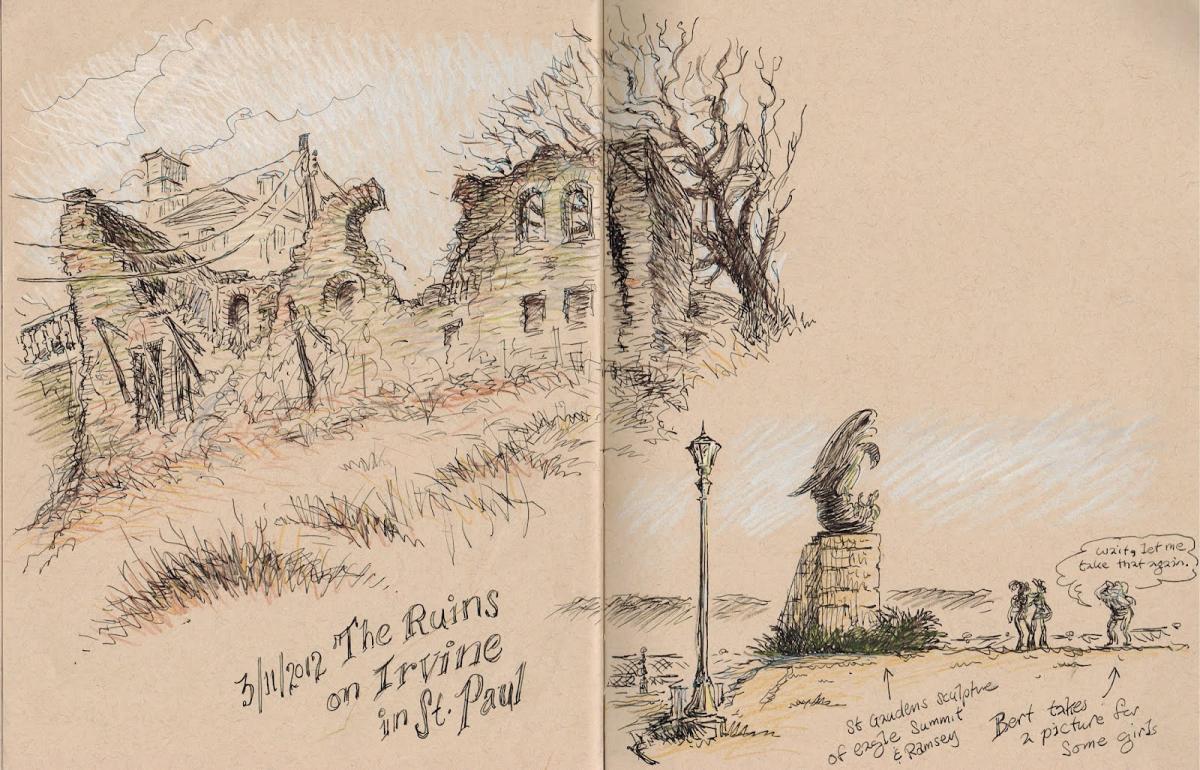 A few weeks ago, the venerable Saint Paul reporter and columnist Nick Coleman posted a photo of a building in Highland Park in severe disrepair. Roberta and I took a bike ride up there to sketch it. This is Roberta’s sketch: 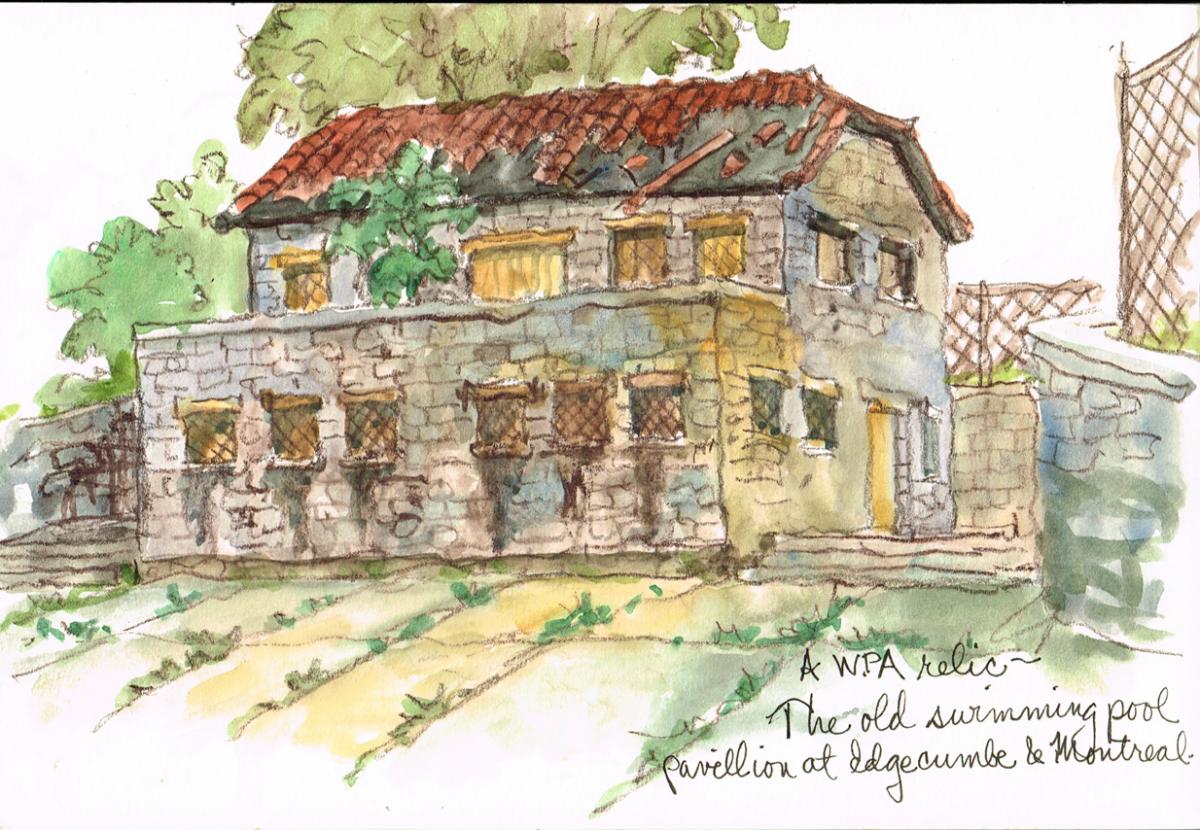 My sketch is from another angle. Notice that the two figures playing “disk (Frisbee) golf”. The metal contraption with the chains is a hole (basket). The Highland disk golf course is very popular. We saw many disk golf players pass by as we sketched the ruin. And that is how we learned why the roof of the building is terrible shape. 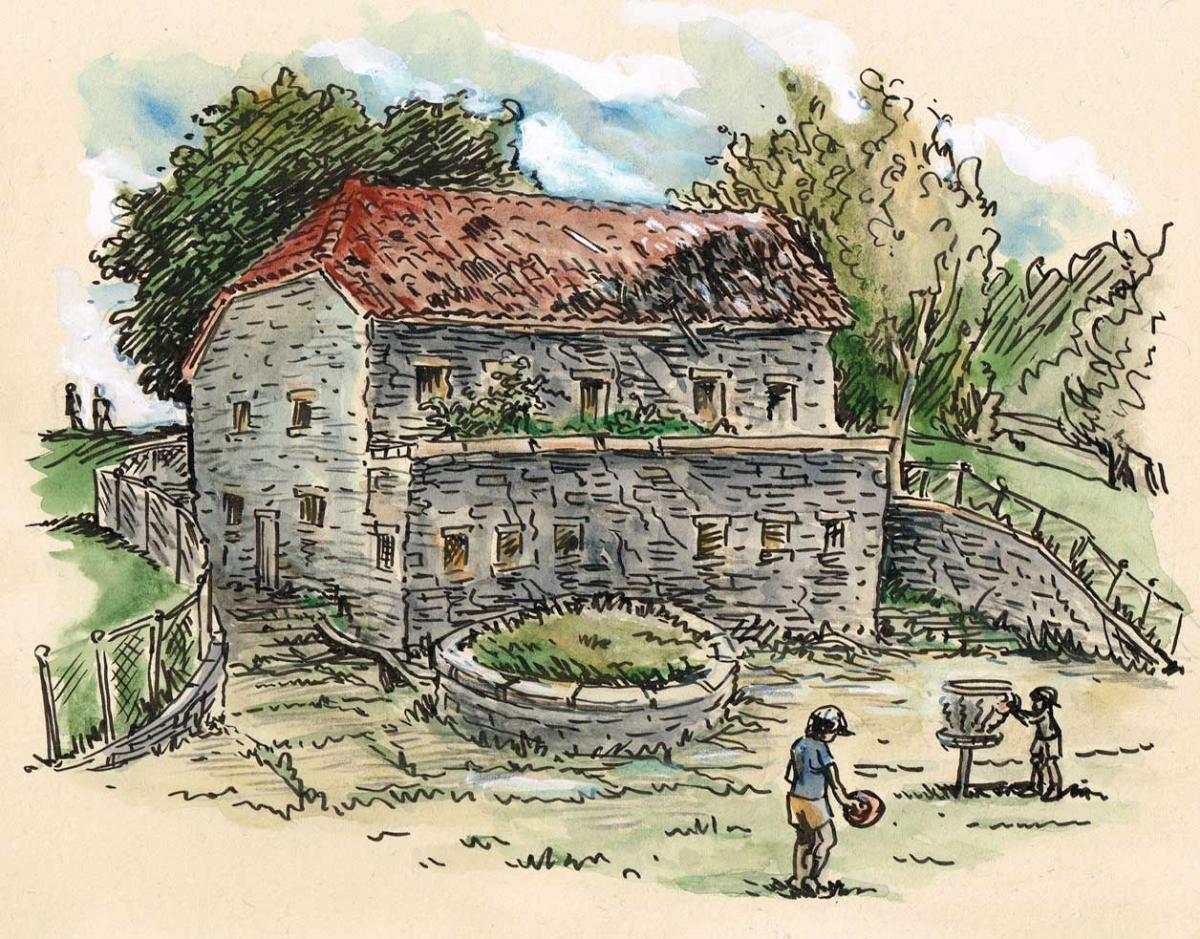 A sudden gust of wind blew one player’s Frisbee off course and onto the roof. He selected one of the tree branches leaning against the building and attempted to retrieve his disk. He failed, but in the process knocked several tiles off the roof – an interesting case of a sport destroying a landmark building: 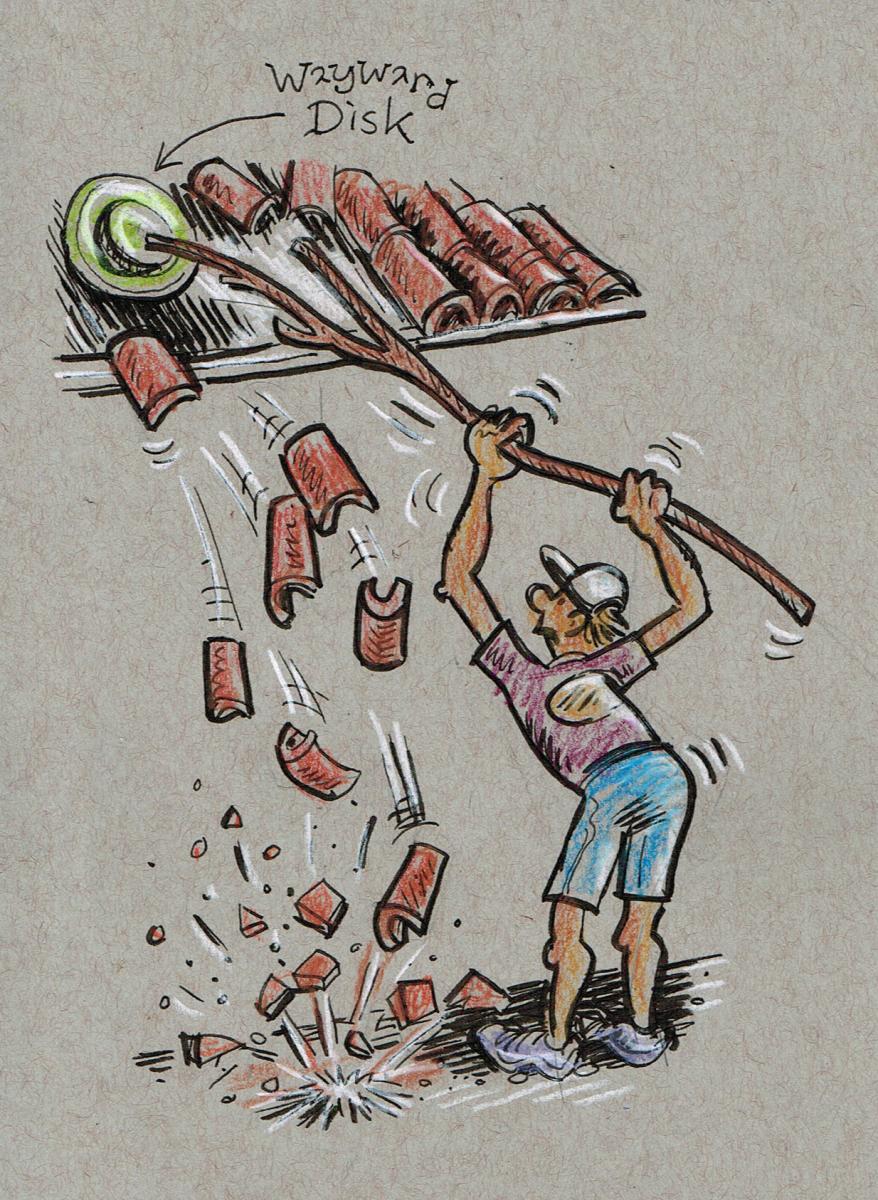 This is a sketch of the Lowertown Depot building nestled in the Bruce Vento Nature Sanctuary from the Kellogg Street Bridge. For some interesting history of the building go to the substreet.org website. There are plans to renovate the building. On the other hand, it may just remain a ruin. 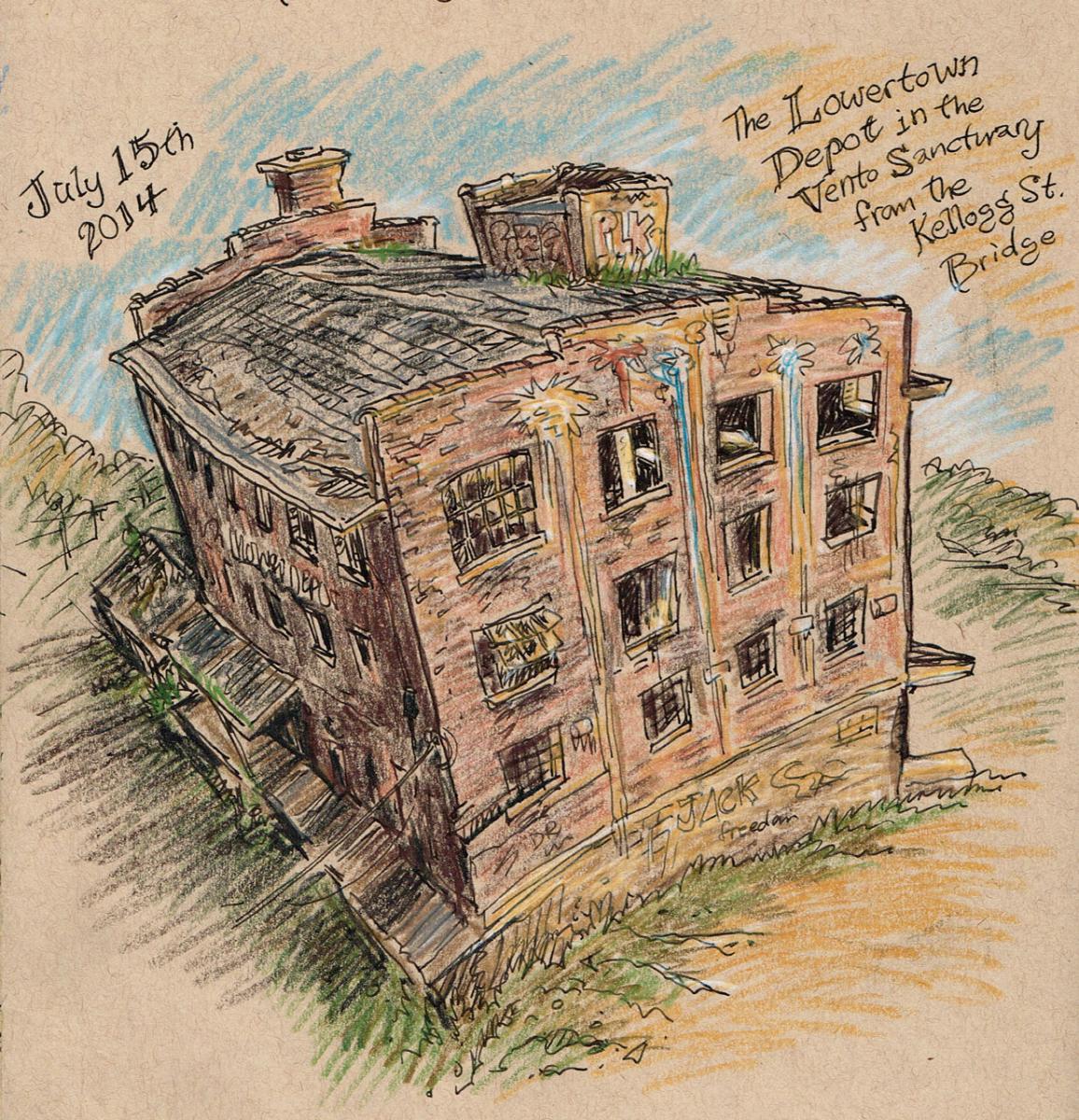 Ruins with modernist architecture are especially haunting in a mocking and ironic way. Buildings like the old Greyhound terminal on University Avenue were built for the future and now… the future is here! There are weeds growing through the cracks in the pavement and shards of peeling paint hang like stalactites from the canopy. The highways and rubber-wheeled transport like Greyhound was supposed to replace traveling by rail, but that’s not how it turned out. The new Green Line LRT speeds past the old Greyhound building. Greyhound buses now stop at the recently renovated Union Depot train station. 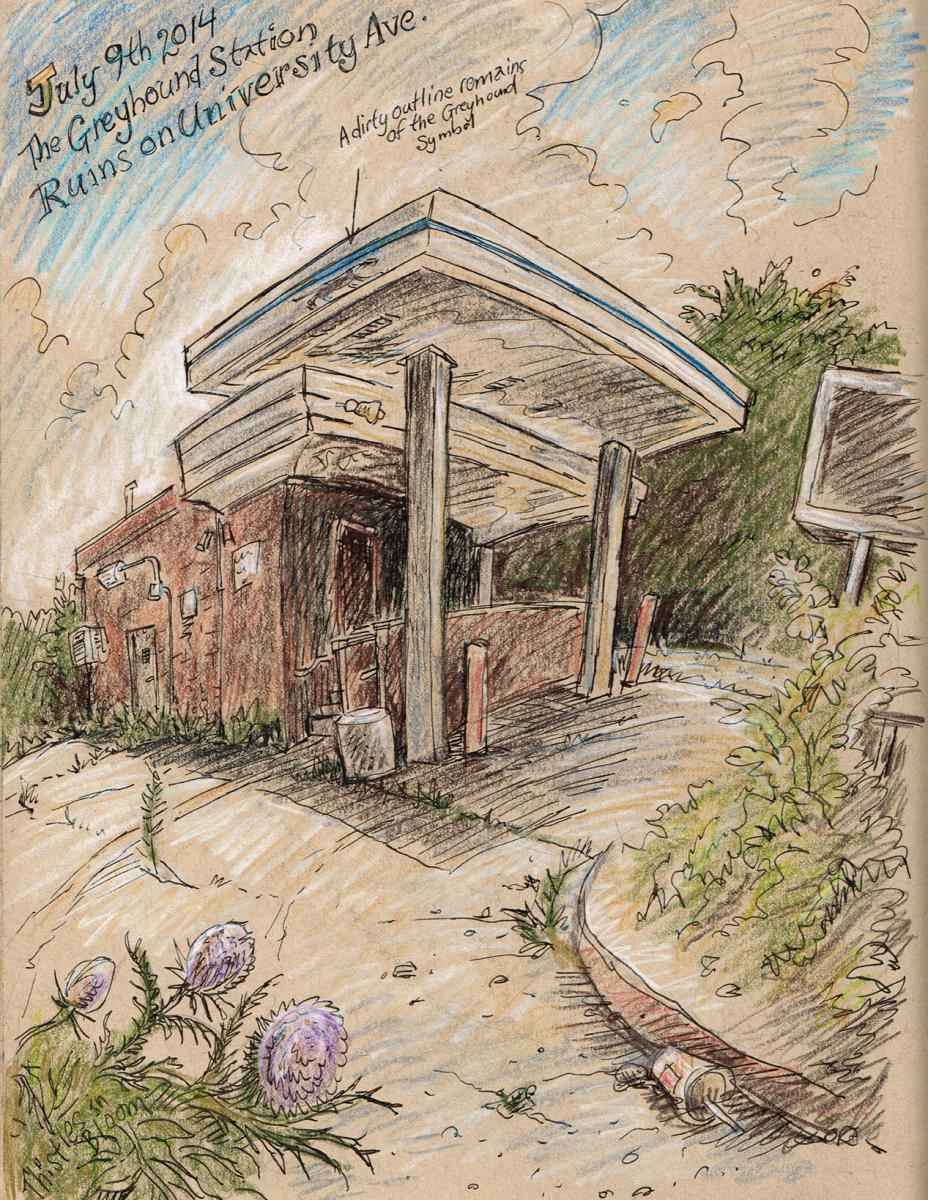 Another sad ruin from the heyday of the Automobile Age sits on University Avenue opposite the Green Line Hamline Station. An old used car dealership building covered in graffiti (“Impeach Nixon”) and a recently painted mural. There is a sign alongside the sidewalk with an architectural rendering of a new building that will soon replace the “Home of the $30.00 Tire”. 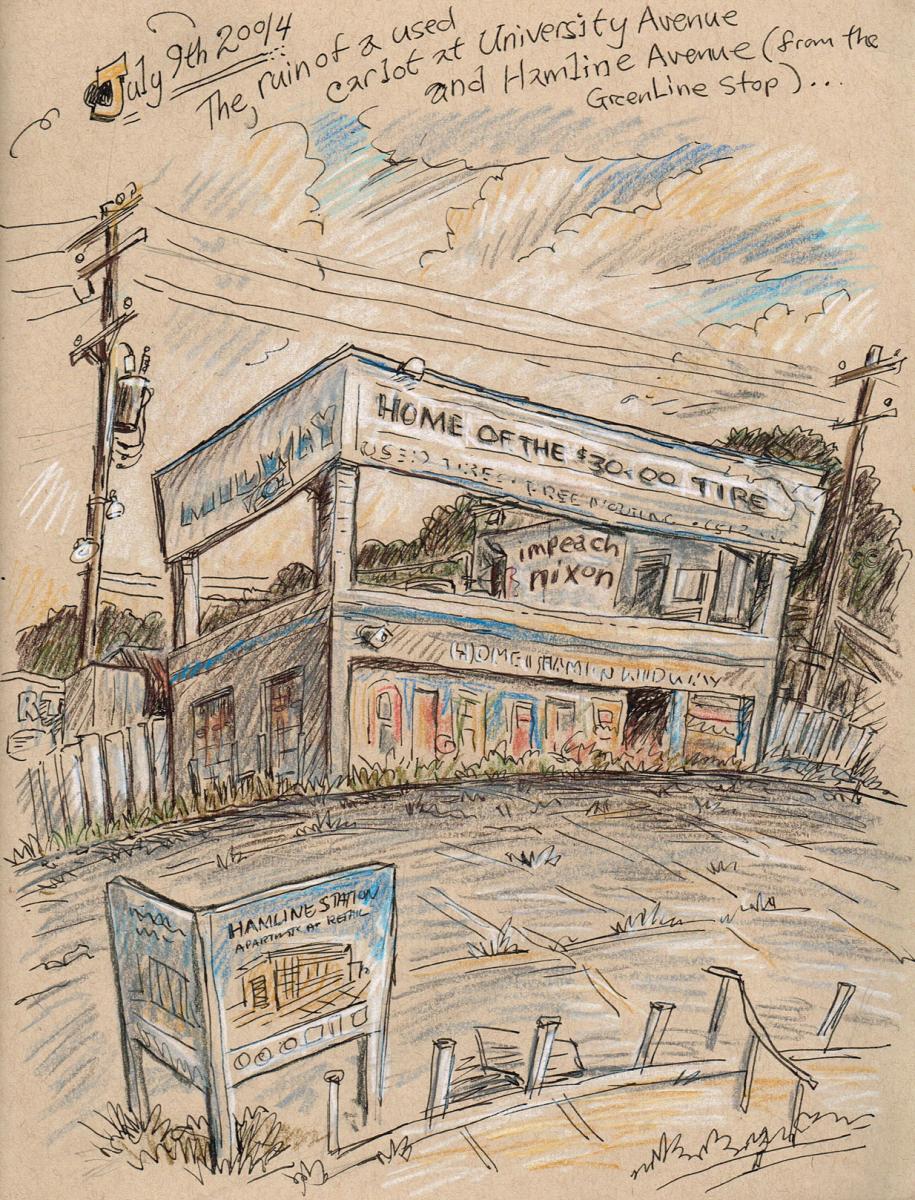 If you know of other sketchable ruins in Saint Paul, please let me know in the comments.