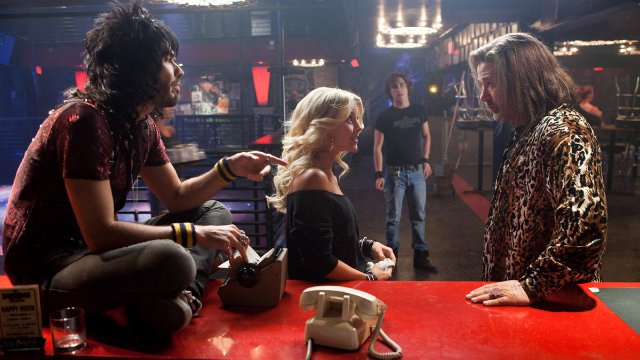 The 1980s lives on with an attitude in director Adam Shankman’s Rock of Ages: a movie adaptation of a Broadway play of the same name. Along with covers of ‘80s rock and roll staple hits by bands ranging from Def Leppard to Whitesnake, Rock of Ages is also affluent with little details from the decade of decadence: leather pants that creak and squeak, hair that’s frozen in rollicking waves by a combination of trigger-happy fingers and hairspray cans, and black eyeliner seen on more men than women. The film has a free-spirited, lets-party-now-and-think-later flavor, and yet it also has characters built with haunted, intelligent layers.

Set in 1987 on the Sunset Strip, the film focuses on the intertwining lives of Drew Boley (Diego Boneta) and Sherrie Christian (Julianne Hough), two young adults who meet in Hollywood after moving from their respective hometowns post-high school graduation. Drew works in the Bourbon Room, a live rock and roll club that takes pride in the spilled beer seeping into its floorboards and the toe-tapping, fist-pumping music that resonates within its walls.

Dennis Dupree (Alec Baldwin) and his right-hand man Lonny (Russell Brand) are struggling to keep the Bourbon Room operational. They yearn to keep living by the spirit of party hardy rock and roll, but still have to succumb to the Man when it comes to taxes and debt. Knocking on their front door with sledgehammer in hand is the mayor’s wife, Patricia Whitmore (Catherine Zeta-Jones), who is motivated by her past to destroy rock and roll in Los Angeles, starting with the closing of the Bourbon Room. The only thing standing in Patricia’s way is Stacee Jaxx (Tom Cruise) a rock god who is scheduled by his manager Paul Gill (Paul Giamatti) to play a sold-out show at the Bourbon Room that should be profitable enough to keep the IRS from hunting down Dennis and Lonny.

The movie is entertaining from beginning to end. You won’t find yourself nodding off at any point, even with the 2 hour and 3 minute runtime (the music is cranked up too loud to snooze). Shankman provides the audience with a buffer zone. Even though the two leads are relative unknowns, he surrounds them with stars that boast eye-goggling résumés. It’s a good move by Shankman, because the acting done by Boneta in Rock of Ages will make me wary of seeing any of his future projects. The guy has good looks, sure, but he’s not right for the role. Boneta is supposed to portray an ambitious bar worker who wants to become a down-and-dirty rock god someday. I couldn’t believe this role for a second looking at Boneta, though, because with his curly locks and watery eyes, he gives off the aura of a choir boy who’s biggest bad boy stunt came from skipping Sunday mass to catch the ice cream truck. Boneta’s acting is poor, his deliveries over-the-top and cheesy, and not “wink-wink” cheesy, either. Shankman should have casted a more rugged, rumble tumble type, but he played it safe.

Playing opposite Boneta as his love interest, Hough grows on you as the film progresses. She possesses a confident screen presence, conveying emotions ranging from giddy happiness to bitter depression with conviction. Hough picks up the slack left by Boneta and steals the scenes when it’s just the two of them.

The big guns in this film are terrific and have a lot of fun with their performances. Baldwin and Brand, rarely more than a few feet apart from one another, share awesome dialogue, with Baldwin spitting out one-liners like it’s an episode of 30 Rock and Brand filling in the blanks with his absurd-yet-understated observations of things happening in the Bourbon Room. The chemistry between the two men is more believable than Boneta and Hough’s.

Wearing an oversized fur coat, ass-less chaps, and a bandana over shoulder length hair, Cruise really shows up for his role as Stacee Jaxx. He stays in a self-inflicted walking coma, courtesy of his best friend: the bottle. While Jaxx’s intoxicated state brings forth many a laugh, it also shows how desperate the rock star is for a way out of his hectic, almost meaningless life. As Skid Row was fond of saying in the early 1990s, Jaxx is a slave to the grind. Head cocked, eyes wide, feet spread in a swagger, Cruise is a real treat to watch, a scene-stealer extraordinaire.

Biding his time in the background before lurching forward with sinister purpose when the need arises, Giamatti is outstanding as Jaxx’s manager. He’s got a ring of hair capped off with a tied back ponytail. A brick-sized cell phone is constantly at his ear as he schemes his way from one gig to another. Giamatti is the perfect antagonist. Like a 1980s version of the demigod Loki, he pops up around characters and offers them deals that smell as oily as the concrete in an auto body shop, all the while chewing furiously on a wad of gum.

The script, co-penned by Justin Theroux, Chris D’Arienzo, and Allan Loeb, is rather stale. There’s not a lot of innovative or meaty material to be found in between the musical numbers. It’s as if the screenwriters were instructed to include only the bare minimum of average dialogue and character development before the characters belt out another tune.

Going into the movie, I was worried that the quality of the singing would have me stuffing my ears into a bag of popcorn within minutes. I really dig 1980s rock music, but Shankman had his cast actually sing 20 rock hits from the ‘80s, and I was pretty sure that I preferred Bon Jovi’s voice to Cruise’s, Kevin Cronin’s voice to Brand’s and Baldwin’s, etc. Well, I still definitely prefer the original artists to Shankman’s singers, but they at least don’t bring shame to the songs they cover. It may be karaoke, but it’s not bad karaoke.

Rock of Ages overall is a lot of fun. You’ll likely be entertained the entire time, especially if you enjoy the boom box hits of old and can get down with the 1980s spirit. Who knows, hairspray sales may even go up slightly this summer.