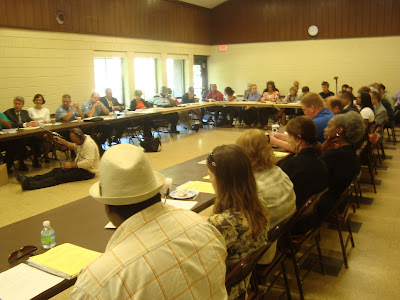 “We definitely need help in Lind-Bohanon,” said Barb Carruthers, a resident of the neighborhood for over thirty years. She echoed the concerns of another resident, Chris Painter, who noted three recent homicides in the Lind-Bohanon community.

Inspector Mike Martin corrected Painter, saying that in one of those shootings, the victim survived. “I know that doesn’t make it any safer,” he added.

With the recent increase in violent crime in Minneapolis as the topic, over 100 residents, community leaders, and public officials gathered on Thursday, June 2nd at the Hawthorne Huddle. Many residents clearly stated that they didn’t want to see yet another meeting with nothing more than lip service, and understandably so. Yet such meetings aren’t meant to solve the problem the instant people walk out the door. Concerns were expressed and heard, possible causes and solutions discussed, and partnerships forged as we work to address violent crimes in Minneapolis. 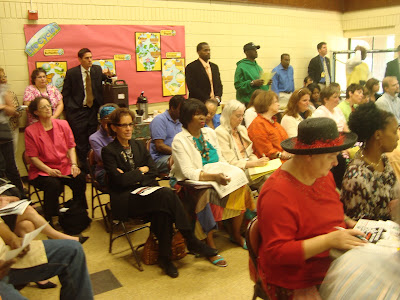 (Other media entities, such as KSTP and Minnesota Public Radio, have reported on this event, but JNS got to it first, and this particular entry will likely be the most comprehensive. Thank you, readers, for your time and loyalty.)

To get things started, Mike Martin spoke about focusing on some of the main corridors such as Broadway Avenue and Lowry Avenue, as well as nodes where crime tends to be concentrated, like 36th and Penn or 36th and Lyndale. After his comments, one person spoke about how the cameras and lighting have made “a huge difference” on Penn and Lowry.

Chief Dolan spoke about how violent crime among juveniles remains down, and that our efforts from previous years are paying off. On the face of it, this seems incongruent with the claims of some of the community members present, that we need more programs for the youth. However, if these youth programs keep our young people from winding up as the future adult violent offenders, then everybody wins. 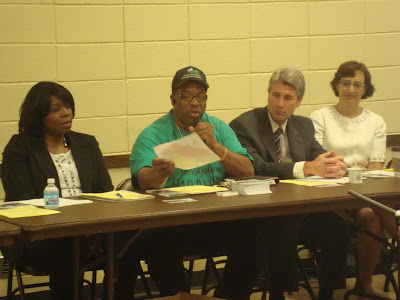 Dolan also stated that half of the homicides this year involved robberies and/or narcotics as a suspected motive, and five were gang-related. So what do we do about it? Dolan said the MPD and their partners will focus on predictive targeted strategies to go after the most prolific offenders. In normal English, this apparently means they will target individuals and gangs using both street and undercover efforts to get the top ten offenders in each geographic area locked up.

Guns are also a common denominator in most of the violent crimes. And the MPD works with the county and United States attorneys to aggressively pursue gun violence. A “good gun arrest” is one that goes to the courts and is successfully used to hold individuals accountable. 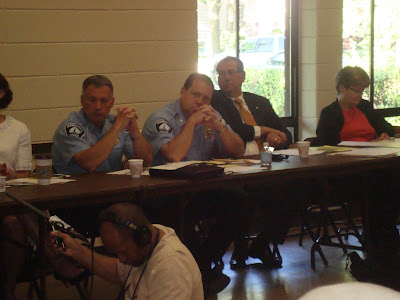 Mayor Rybak spoke about how this is “an absolutely unacceptable level of violence, and in marked contrast” to the progress we have made over the past three years. This is certainly not the first such meeting in Hawthorne on this topic, as a similar forum happened in 2006. In contrast to that forum, the most vocal residents were from much farther north than before.

In laying out a five-point strategy, Rybak said “Anyone who commits a violent crime anywhere in the city should feel the heat.” The five strategies Rybak detailed are:

3. Greater focus on gun seizures and preventing gun violence. While articulating this strategy, Rybak said they ask where do the guns used in violent crimes come from? And the answer is that many make it to the streets after being stolen from gun shops.

5. Increased community engagement and support for community-led efforts to reduce violent crime. Here, he began to close his remarks by saying, “Now more than ever, we need the police and community” to work together. “We are frustrated, we are angry, and we are acting.” 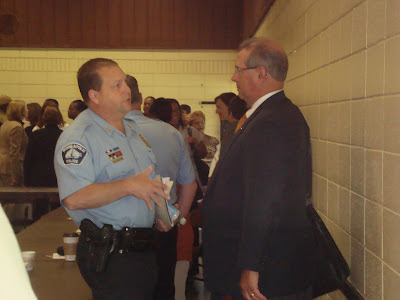 These community partnerships with the police department and the city were a crucial factor in making part one offenses virtually non-existent in the Hawthorne EcoVillage, and I for one offer whatever assistance I can give to the affected neighborhoods AND city departments to do what we can to replicate that success elsewhere. Whether I do these things in my capacity as Hawthorne Housing Director or as a volunteer, I am just as committed to helping however I can.

Chief Dolan was up next, and emphatically stated that “This chief and this mayor made juvenile crime a priority.” He focused on prevention efforts such as the truancy supervision center. When a 13-year-old is out on the streets at 1 a.m. “there’s only two things that are going to happen, neither of them good. They’re either going to commit a crime or have a crime committed against them.”

So the county is committed to using the truancy supervision center as a means to keep kids off the streets until their parents can get them, and ultimately keep kids in school so they don’t miss opportunities to learn the life skills needed to stay off the streets.

The county is also focused on felony gun cases. When (ex)felons who are not supposed to have guns are caught with them, that’s a pretty open-and-shut case that makes a huge difference in getting violent offenders off of the streets. Just like in drug dealing cases, the county is less concerned with the small fish and more focused on finding the source. This is much harder with guns, however.

Finally, Freeman noted that community impact statements make a huge difference when residents can either write up their account or ideally show up in court to testify how we’re affected by an individual’s violent acts. And geographic restrictions are quite helpful in that they allow the police to take action whenever a person is even seen in an area they’ve previously terrorized and are not supposed to be in.

VJ Smith of MAD DADS spoke next about how young people on the streets are looking for love that they don’t have at home. He announced a community resources fair being held on Saturday, June 12, 11-4 at 900 W Broadway, in the McDonald’s parking lot. For more information, contact V.J. at 612-455-4632 or vjsmith@urbanventures.org. “Everybody’s sick and tired of just sitting around and talking. Let’s get busy.”

Smith spoke about how in one day of outreach, he made 158 referrals of people who want help, and got them in contact with places that can offer the necessary resources. Many kids, according to Smith, start with gang affiliation as early as the 5th grade, and most start because of issues in the home.

Smith was the first person to get any kind of applause, when he closed with his remarks, “I want to be the heart behind what goes down (on the streets)…that’s not law enforcement’s job, but that’s MY job.”

Once the floor was open for questions, Chris Painter of Lind-Bohanon described her situation as noted in the opening of this post. Part of the difficulties in her neighborhood is that many people are either afraid to go on walking patrols, even with MAD DADS, or they work long enough hours that they just don’t have the time. When she said she was feeling neglected, Martin and Rybak responded that there is a constant struggle with the allocation of resources, but they’re familiar with all of the people doing crimes.

The other Lind-Bohanon resident, Barb Carruthers, said she has identified four drug houses on her block alone, and that in one case, she saw one car pull up and do eight drug deals in ten minutes before leaving. That’s how quickly this kind of thing happens.

Troy Parker, who ran for city council in Ward 4, brought the issues to his concern of joblessness among those committing crimes. He brought up MnDOT and its failure to hire sufficient numbers of minorities.

(Hawkman interjects: What’s the issue with MnDOT complaints anyway? I’ve seen reports that make it appear as though they ought to be doing a better job hiring minorities. But what I don’t see is a connection that so many people make between that and the need for jobs in north Minneapolis. Plus, the city of Minneapolis doesn’t have authority over MnDOT. And it’s not as if MnDOT is the only game in town, and I also haven’t seen it clearly articulated that MnDOT’s improvements would have such a huge impact in NoMi. Am I missing some detail about MnDOT or is this fixation misguided in some way?)

Rybak wanted to keep the focus on the tactical response to the crime, but did say that now in Minneapolis unemployment is lower than it is in many of the suburbs – a rarity in metropolitan areas. Mike Christenson of CPED also stated that 2300 youth will be employed this summer through the city’s job program. And out of 300 residential rehabs in north Minneapolis, 50% are being done by Northside or minority contractors. (He didn’t bring up the high performance of the Ackerberg Group/Catalyst along West Broadway in this regard, but I will.) Christenson said that MnDOT should model itself after the city’s success.

Other residents expressed frustration that people move out of the neighborhoods due to crime, and that opens the doors for slum landlords to buy properties and rent to people who perpetuate the cycle. And another asked what we can do about the fact that funding streams for youth programs are in a perpetual state of decline. Rybak invited people to come to his open houses, which he has twice a month, to discuss these things.

Don Allen asked where the Minneapolis Urban League has been around this issue. And what about the Northside Marketing Task Force? (Hawkman interjects: the NMTF died a gruesome death from its own dysfunctions and is likely never coming back in any meaningful way. And what does that have to do with the issue at hand?) He also insinuated or directly claimed (my notes aren’t quite clear on this) that the black people in attendance aren’t representative of the community and are only there because they’re running for office.

Rybak countered that he’s never seen the MUL more focused than they are right now. They haven’t always been so committed, but they’re working with us now. (In fairness to Allen’s question, nobody from the Urban League seemed to be in attendance. If they indeed are so focused, then they need to have a presence at large community events like this one so that we are aware of what they’re doing.)

A Hawthorne resident asked what happens to the guns that get confiscated (they’re destroyed, according to Chief Dolan). And how do we know about geographic restrictions? Roberta Englund of the Folwell and Webber-Camden neighborhoods directed her to the 4th Precinct CARE website. (Hawkman interjects: This site looks great and informative. But I can’t seem to find anything on geographic restrictions. Anyone more familiar with the site, help me out. Because what we REALLY need is a dedicated area where people can go to easily search names, physical descriptions, crimes committed, and geographic areas so that residents can be informed and take action around this issue.)

But perhaps the most impressive speaker was Jamil Jackson, a northside resident and father who coaches basketball for our youth. He said the other night he had 113 kids in the gym playing basketball, and there was no violence. “They need us,” was his plea for more volunteers to help with programs like this one. But he also called out the Boys and Girls Club, saying they want $5 for entry. So the kids who don’t have that hang out across the street. And “of course the man with the money draws them in.”

Jackson, like many others, heard a lot of discussion about issues, but likely left wanting more in the way of concrete solutions. Don’t we all? But such is the nature of meetings like this Hawthorne Huddle. The dialogue and networking that happen are crucial, but what really matters is the results we get when we take action together.