Ask educator Bill Wilson why Somali students do well in school and he’ll answer with authority: “Their families put so much value on education.”

That’s a question I felt compelled to ask after reading the “One Minneapolis: a vision for our city’s success” report released last week by The Minneapolis Foundation.

Intending to follow up on the stats, I only touched on a finding that merits not only a “wow,” but also a “why?”

Here it is: 76 percent of Minneapolis school children coming from homes where Somali is spoken test kindergarten-ready, not terribly far behind the 82 percent of English-speaking kids who are kindergarten ready, and better than some other groups. The graphs below reflect children’s literacy readiness as measured in the fall of their kindergarten year. 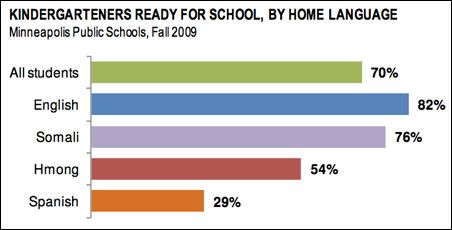 Seventy-six percent of Somali-speaking children were ready for kindergarten in 2009. (Graphics courtesy of The Minneapolis Foundation)

Factor in that many of these Somalis are immigrants and the inquisitive among us would ask: What’s the secret of their success?

Some social-service providers hypothesize it’s because Somali moms are home teaching their kids.

Others explain higher kindergarten readiness by saying many Somali parents arrived in the United States better educated than some immigrant groups and so are better able to teach their children. (A communications person with the Minneapolis Public Schools could not locate anyone able, willing or available to explore the numbers in detail.)

But many experts also argue the importance of early childhood programs for kids.

“The majority of [Somali] mothers are home,” says Carolyn Smallwood, executive director of Way to Grow, an early learning program for kids of all colors and their parents. “The Somali moms are great.”

Still, she boasts her program pronounces 87 percent of all its kids are kindergarten-ready, regardless of their backgrounds, thanks to the curriculum of at-home and in-center learning.

Somali parents, Smallwood adds, also, rightfully, benefit from services focusing on new immigrants. I can understand that. A couple of years ago, Sketchbook featured the East African Women’s Center, which offers services to these newcomers in conjunction with specialized English-language, parenting and preschool classes.

“I’m not sure if it’s their status as recent immigrants or if it is part of their culture,’’ says Ann Ruff, but educating their children is important to Somali parents.

“What we find,’’ she says, “is that the [Somali] parents are extremely focused on education. They will show up and bring their kids to our advantage centers for any program that will help their children be successful learners,’’ says Ruff, vice present of resource development for CommonBond Communities, the largest nonprofit provider of affordable housing with services in the Upper Midwest. Among those services are preschool programs, including Early Childhood Family Education programs provided by Minneapolis Public Schools.

“Somalis are very much involved with their kids…They really care about their kids,’’ affirms Omar Da’ar, a Somali father with children in Minneapolis Public Schools and an economist working for Wilder Research.

He and his wife agreed she’d stay at home to provide a “stable upbringing” for their four children, he says. The oldest two went to preschool and now are in grade school, a third is in pre-school and the youngest child goes to an Early Childhood Education class with mom. 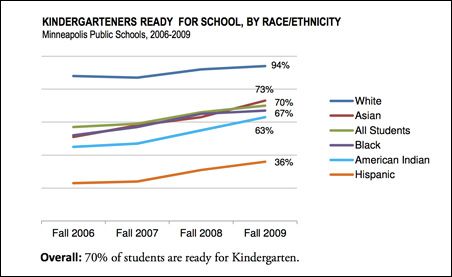 And that’s what he sees firsthand among his 700 students in the classrooms of Higher Ground Academy in St. Paul where he is executive director. These families — almost all Somali and many of them immigrants — from around the Twin Cities and suburbs, see education as their children’s stepping stone to American success, he says. Consequently, they motivate their children to learn.

Afro-centric, the K-12 charter school he founded 11 years ago made AYP in 2010 (Minnesota’s measure of academic quality), Wilson says, because his families — most of whom are Somali— and his school “really do a lot of motivating.”

Families, he says, “make the effort” to prepare their children for school, buying or borrowing English language CDs, buying, borrowing from the library or obtaining free books for their children, thus instilling the value of learning. “A book in the home shows it’s important. It’s treasured.”

“They encourage their children to read and they coach them,” often learning English words along with them by using simple picture books, he continues. Or these parents sit and watch cartoons with their children, engaging them in conversation to use English and to get them thinking.

The children hear that “if they’re going to make it” in America, they’ve got to get educated, Wilson says.

Families expect their older children to help teach their younger siblings, as well. Wilson says he used to see the same thing in Hmong families when he campaigned door to door for St. Paul City Council in the 1980s and ’90s. Somali families also enroll their children in Head Start programs, adopting educators’ suggestions for what families should do at home to encourage a child’s learning.

At Higher Ground, parents are considered partners in their children’s education with teachers, communicating with every family at least once a month, helping solve learning problems but also celebrating children’s successes, Wilson says. “We tell them, ‘Parents, you’re a big part of this.’ “

This article is made possible in part by the Don W. Taylor Fund of The Minneapolis Foundation.