Around the Twin Cities, the need for help with the necessities of life is rising.

In the Minneapolis area, requests for emergency food assistance this year rose 15 percent over last year’s numbers and spiked 14 percent for emergency housing.

In St. Paul, at food pantries and free kitchens, as well as homeless shelters, people have at times been turned away because resources were exhausted.

Such reports put the Twin Cities in the same social-service boat as most of the 29 cities responding to the United States Conference of Mayors 2011 Status Report on Hunger and Homelessness released Thursday.

Eighty-six percent of the cities report increased calls for food, with an average increase of 15.5 percent. The survey also shows an average 10 percent increase in number of pounds of emergency food distributed, though the conference says the survey should not be taken as a national assessment of the problems of hunger and homelessness.

Ranging in size from Asheville, N.C., to Washington, D.C., the cities are all members of the conference. The nation’s official poverty level of 15.1 percent in 2010 reflects the highest level recorded in the 52 years of such data collection.

“Like other parts of the country, the economy is just dragging things down. I think we still have a ways to ride this out,” says Lisa Thornquist, who works with the Office to End Homelessness in Hennepin County and the City of Minneapolis.

Poverty and near poverty

Also circulating the same day as the Conference of Mayors report was an Associated Press analysis of the effect of the lagging economy on struggling Americans showing that almost one of every two Americans has fallen into poverty or near-poverty.

According to Yen’s analysis, about 97.3 million Americans qualify as low-income because they earn between 100 and 199 percent of what the government defines as poverty level based on the Census Bureau’s new supplemental definition of poverty. Add in those 49.1 million who dip below the poverty line, and the poor and near poor total 146.4 million or 48 percent of Americans. 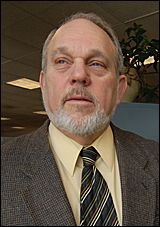 Minnesota state demographer Tom Gillaspy admits to being “a little stunned” when he heard a radio report about the story.

Keep in mind, Gillaspy told me, that there are three categories of poor people, those perpetually in poverty, those who cycle through regularly like seasonal workers, and that group very occasionally in poverty.

The “occasional” group includes the middle-class family where someone loses a job and is out of work for six months and may be receiving assistance but the household is also living on savings. That third group is most common, he says.

Clearly, more people now are in that “occasional” category because of the employment situation, Gillaspy says.

He adds that Minnesota generally has a lower poverty rate than the United States as a whole but that gap is narrowing.

“We’re not quite as different as we used to be,” Gillaspy says, though adding Minnesota is doing “a little bit better economically than the rest of the nation and recovering faster.”

In Minneapolis, housing needs this year were magnified when an early summer tornado in the north end of the city left large numbers of people without shelter. Though that summer “big blip” has passed, shelter needs — especially among people of color — are still trending higher than last year, says Thornquist of the Office to End Homelessness.

“It’s all about the economy and living in poverty,” says Thornquist.

St. Paul did not provide city numbers for the Conference of Mayors survey because the city does not provide social services to its residents. It is the county and the state that do that, said Joe Collins, program coordinator in the city’s Department of Planning and Economic Development.

Collins reported in the survey that some emergency food and housing providers this year had to turn away some hungry and homeless persons because of lack of resources. Consequently, the city and county this fall found funding for 50 additional shelter beds for single people and 20 additional beds for families.