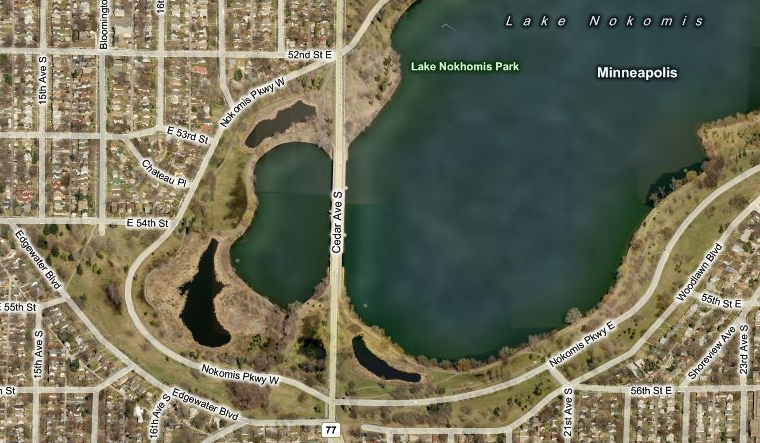 Back in 2012, Reuben Collins wrote about the the Cedar Ave bridge over Lake Nokomis, “a clear example of a roadway that went over when it should have gone around.”

Fast forward to 2014, and there’s a revision underway to the Park Board’s master plan for Nokomis Hiawatha Regional Park (well, everything except Hiawatha Golf Course, which Bill talked about in a previous article).

Like Reuben, I live close to Lake Nokomis, Lake Hiawatha, and Minnehaha Creek. My wife and I use these parks all the time, biking around the lake to wind down after work and sometimes taking a swim on warm days to cool off. But the lake is not connected to our neighborhoods as it should be.

The Cedar Ave Bridge over Lake Nokomis was a planning blunder, and the time is here to fix our mistake: The Park Board should urge Hennepin County to remove this bridge.

Cedar Ave is a physical and psychological barrier disconnecting neighborhoods from these amenities: The intersection at Minnehaha Pkwy, with beg buttons and cars turning across bicyclists with the right of way, isn’t great. Nor is it pleasant to hit beg buttons and cross two stoplights just to bike all the way around Lake Nokomis. It’s not just park amenities which are cut off: I often see people struggling to cross on foot to get to their neighborhood grocery store or other businesses along Cedar. 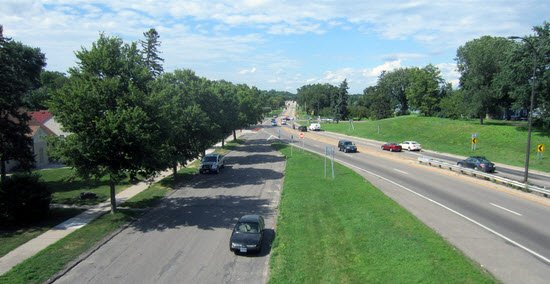 The transition of Cedar Ave from freeway to neighborhood street, across Lake Nokomis. (Photo by Bill Lindeke / Twin City Sidewalks.)

But ultimately the bridge defiles Lake Nokomis. It defines perception of the lake in historical photos, and in events such as the Twin Cities Marathon, Lifetime Triathlon, and US Pond Hockey Championships that showcase our wonderful neighborhood to folks from all over the world. It defines the viewshed of the park from the Nokomis Knoll Residential Historic District. It compounds the environmental impact of the incessant noise of airplanes heading to or from the parallel runways at MSP a half mile south, which already defines our wonderful lake as an “other” in the minds of many in our City of Lakes.

Cedar Avenue is a critical component of our South Minneapolis street grid, and that’s a good thing. But Cedar Ave viewed as an extension of the 77 Freeway which technically ends at the Crosstown but continues, at least psychologically, thanks to this bridge. 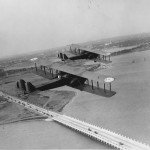 Interestingly enough, this concrete girder bridge is not a naturally occurring feature. (MNHS photo at left)

Cedar Avenue is a street administered as a county roadway, County State Aid Highway 152. Therefore, the folks in Medina would need to sign off on removal of the bridge – and they’d probably put up a fight.

But Cedar Avenue was bridged during a different era, an era before we had regional freeway connectivity. Park/Portland, Cedar, and Hiawatha were considered routes to get into and out of the core of our city, but we now have Interstate 35W. And, with the upcoming 35W Access project, we will have an entirely new (less than decade old) freeway from Downtown to the Crosstown. Shouldn’t that give us some breathing room to take back our parks and our streets?

Even Theodore Wirth was opposed to bridging Lake Nokomis. From Minneapolis Park history:

The Cedar Avenue Bridge at the bottom of the aerial photo was the subject of great debate […] in the 1910s. Park superintendent Theodore Wirth’s plan for the improvement of Lake Nokomis in the 1912 annual report included rerouting Cedar Avenue around the southwest corner of the lake to eliminate a “very unsightly” wooden bridge over the edge of lake at the time. 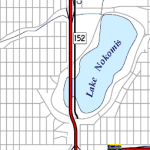 Beginning in the late 1940s, Cedar Avenue (then a southward extension of Hwy 36) was scheduled to become a freeway. Streets.mn contributor Adam Froehlig has an excellent overview of this plan on his personal page including a nice map. By 1970, the freeway plan was scrapped, but according to its record at UglyBridges.com it was still decided to replace the bridge in 1984.

It’s not too late to remove the bridge. It may not happen tomorrow, but the Nokomis Hiawatha Regional Park master plan can include an official call to do what Theodore Wirth would want done: Remove the Cedar Avenue bridge over Lake Nokomis.

For more fun history, check out this article from Nokomis East Neighborhood Association. It includes photos of the glow-in-the-dark shrimp, a B-1 submarine, and giant observation balloons that were all introduced to Lake Nokomis during WWII.