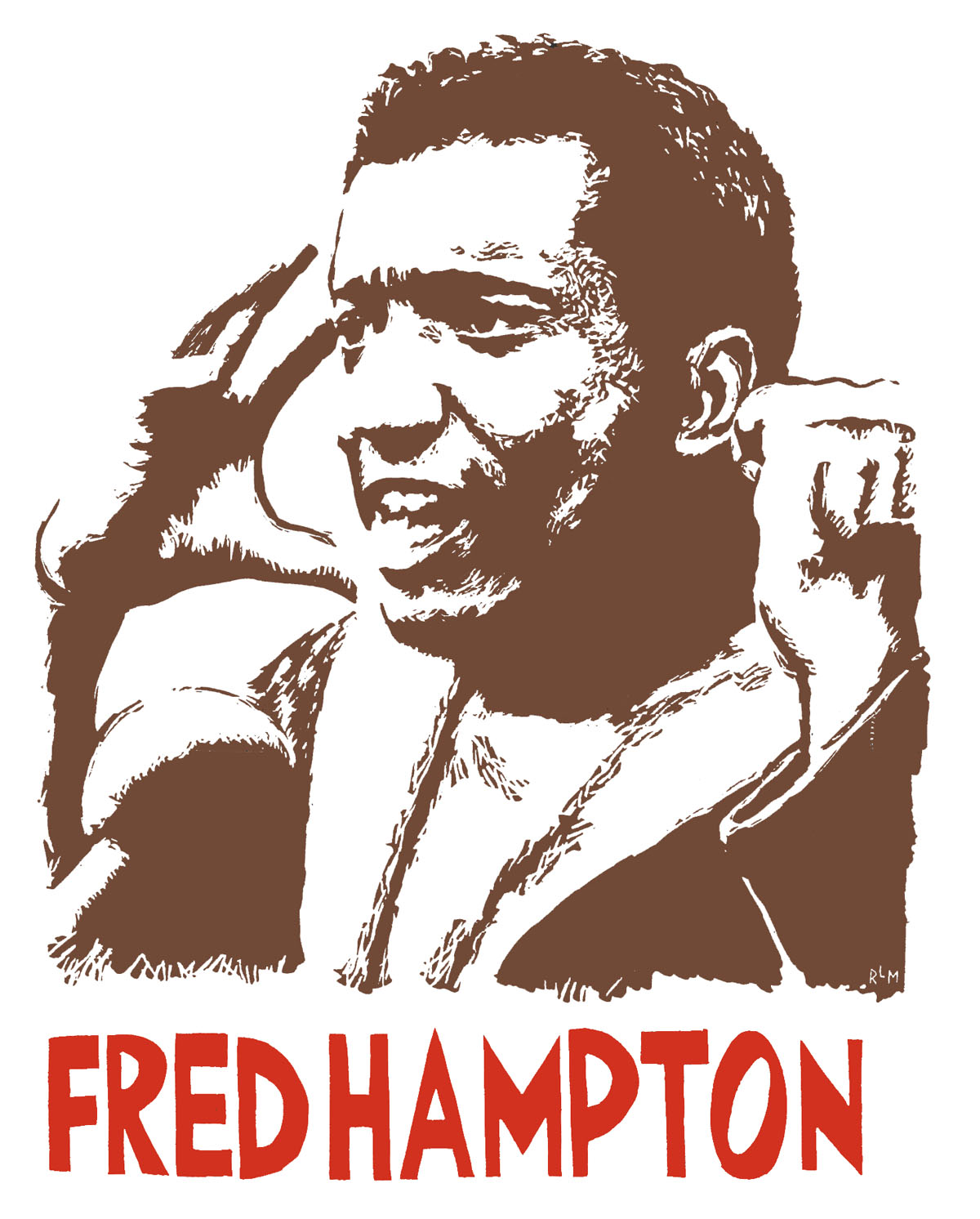 Screeching tires.  Flashing lights.  Heavily armed men rushing up the dark stairwell open fire through walls and doors on the sleepers inside.  When it is over at least 90 holes mark the trajectories of police bullets entering the apartment, mostly aimed at a young man’s bed.  One bullet had answered from within.  It was December 4, 1969, 35 years ago this week [this was written in 2004].

A few hours later my junior high teacher asks me about my black arm band.  “Fred Hampton was murdered this morning,” I reply.  Over the next few days members of the Chicago Black Panther Party will usher clusters of supporters (my father included), through the shattered and blood-stained apartment—until the police seal off the evidence. It will be learned that Hampton’s body guard, a police informant, had laced his juice with a sedative and given the cops a floor plan of the apartment, an X marking the location of his bed.

The official line, trumpeted in the media by FBI-linked reporters, was that the Panthers were a danger because they were racist and violence-prone.  Internal FBI memos tell a different story.  It was precisely the Party’s ability to bridge racial divides that they found so alarming.  The Fed’s failure to provoke deadly violence between the Panthers and the Blackstone Rangers street gang led to the pre-dawn raid.

The following years saw me organizing walkouts and marches, conferences and occupations in support of the besieged party.  I worked in the Panther Defense Committee and even my high school’s banned Black Student Union (where I held the cherished title of “Token Spic”).  While a young Mumia Abu Jamal was hawking the Black Panther newspaper on the streets of Philly, I—though a member of neither group—was selling the Panther along with Pitirre, the paper of the Young Lords Organization, in Chicago.  The Lords were like Puerto Rican Panthers.  They’d been a street gang that went political under the Panther’s influence.  Fred Hampton mentored them.  Chairman Fred also pulled in the Young Patriots, white street kids born of the Appalachian migratory stream.  He brought them all into an alliance for which he coined the name “The Rainbow Coalition.”  It was 1968.

Fred Hampton is remembered as a martyr of the FBI’s war on the radical left, the COINTELPRO (Counter-Intelligence Program).  What folks forget is the promise he embodied.  While the national leaders in California, Huey Newton, Bobby Seal, Kathleen and Eldridge Cleaver, became household names, there were stars shining in the chapters.  Fred was one of the brightest.  Soon after he’d founded the Chicago Chapter he had five “Free Breakfast for Children” programs running on the west side, along with a free health clinic, door to door screening for sickle cell anemia, and the Panther’s famous police watch patrols.  He had a charismatic ability to communicate with all kinds of people, a way of cutting through the ideological fog, and a love for the abused and disrespected of the streets that was contagious.  He was soon talking with the Latin Kings, the Blackstone Rangers, and the Disciples, looking for ways to bring them out of the street wars and into the struggle.  (It’s a credit to the politics he personified that this tribute to him is written by a Jewish Puerto Rican.)  He was the kind of leader that FBI field offices were warned to watch out for and, when identified, to “neutralize.”   When he fell he had been tapped to become national Chief of Staff for the Party.  He was twenty one years old.

The wave of repression that took Fred Hampton and fellow Panther Mark Clark that morning, swept across U.S. communities of color leaving hundreds dead, wounded or in prison (where many remain).  In its wake came the money, federal funds pouring into new social service agencies and police departments.  A “leader” in our communities was now anyone who got to head up an agency.  As whites fled the cities and funds were shifted elsewhere, dark faces were allowed into mayoral offices to preside over the wreckage.

The craving for dignity and respect that electrified the struggle of a generation ago still echoes in our streets, but without the hope it finds its outlet in gangs.  In place of the “survival programs” there are “non-profit corporations.”  Stripped of revolutionary vision, they are designed to administer, not to transform.  Two forms of community “management,” neither of them a threat to the structures of wealth.

Brother Chairman, the challenges we are facing are no harder than those you confronted.  If you were with us you’d simply insist that the despised and oppressed are the solution, not the problem.

We lost you too soon, little brother (cruel history has made me your elder now).  I’m sorry we couldn’t protect you.  I’m sorry that your son has had to follow your road without ever having touched you.

This was first published in 2004 in the Minnesota Spokesman Recorder.