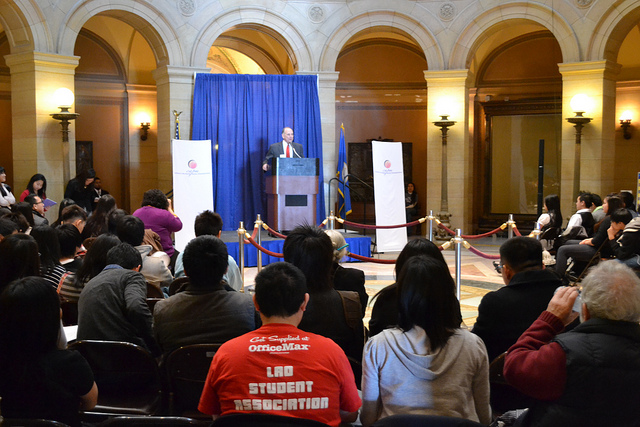 June 20th is International World Refugee Day. It was established by the United Nations to honor the journey of those who are forced to flee their homes under threat of persecution, conflict and violence. This is part of the history of many Minnesotans who are rebuilding their lives here.

For the Lao community, most of our 12,000+ residents can sympathize with those struggles, having faced those uncertainties ourselves. Today, there are 43.7 million refugees around the world. We need to remember those times when we had to turn to strangers for aid, and give back as we can. It is also important for us to do what we can to reduce the disparites that lead to those conflicts that create refugees in the first place. One does not stop suffering through silence.

As a community, we must be more pro-active with our civic engagement, standing up not just for other Lao but for any others who we see being marginalized and exploited by the system.

As one case in point: We have serious stakes in immigration reform, with over 40 years of perspective on the system, yet our voices are rarely brought to the table. Our opinions are typically taken for granted, and I think that’s a mistake. Personally, I don’t believe Lao Minnesotans who remember their roots have any room to stand against humane immigration reform.

We should be calling for policies that build communities and ease barriers for family reunification, in particular.

We need to stop separating families with our current immigration policies, and we need to create reforms that allow individual hearings for those facing deportation. We need to base our decisions on an individual’s personal merit rather than the convenience. Others have called for exempting refugees from deportation for fear of retaliation in their original homelands. This is an especially serious risk for those who come from families allied with the US during the wars. Not everyone agrees on this, but these are just some of the issues we should be having conversations about.

While there are several Minnesota legislators who understandably want to appear “tough on crime,” more voices are needed who call for real solutions that build our communities constructively.

We need approaches that create safer schools, neighborhoods, workplaces and community centers. We need less school-to-prison pipelines and more energy put into policies that encourage innovation and opportunity. We need to disrupt the disparities that create gangs and delinquent behavior in the first place.

The knee-jerk response in some circles is to deport criminals to any country that will take them. But evidence shows that this is an approach almost guaranteed to sink many refugee families into a multi-generational cycle of poverty. This creates far more long-term strains on the system than deportation solves. Many of the families include children and elders who are put at intolerable risk when one or two parents are deported. Over the long run, that’s not cost-effective, nor do I think it’s particularly Lao or American to give up on people.

We need to invest back into human potential.

The Kaufman Foundation recently released a report that found that in 2012, immigrants were twice as likely to start a business as native-born Americans. But it also found that immigrant entrepreneurship has stalled for the first time in decades thanks to an “unwelcoming immigration system and environment.” When I look at the potential Minnesota has, I’m saddened to see how few Lao entrepreneurs have emerged who are taking a chance to create a new business here, and how few resources there are in place to support those who do.

We’ve had as many as 3 wats, 9 churches and 30 Lao-owned businesses in Minnesota, including restaurants, grocery stores and one newspaper. But with a community of 12,000 we should be able to sustain more. An increase in Lao-owned businesses would help provide the necessary infrastructure to assist many workers who’ve been displaced this decade by the dictates of current domestic policy.

I hope our legislators and our community can begin to work together to turn this around.