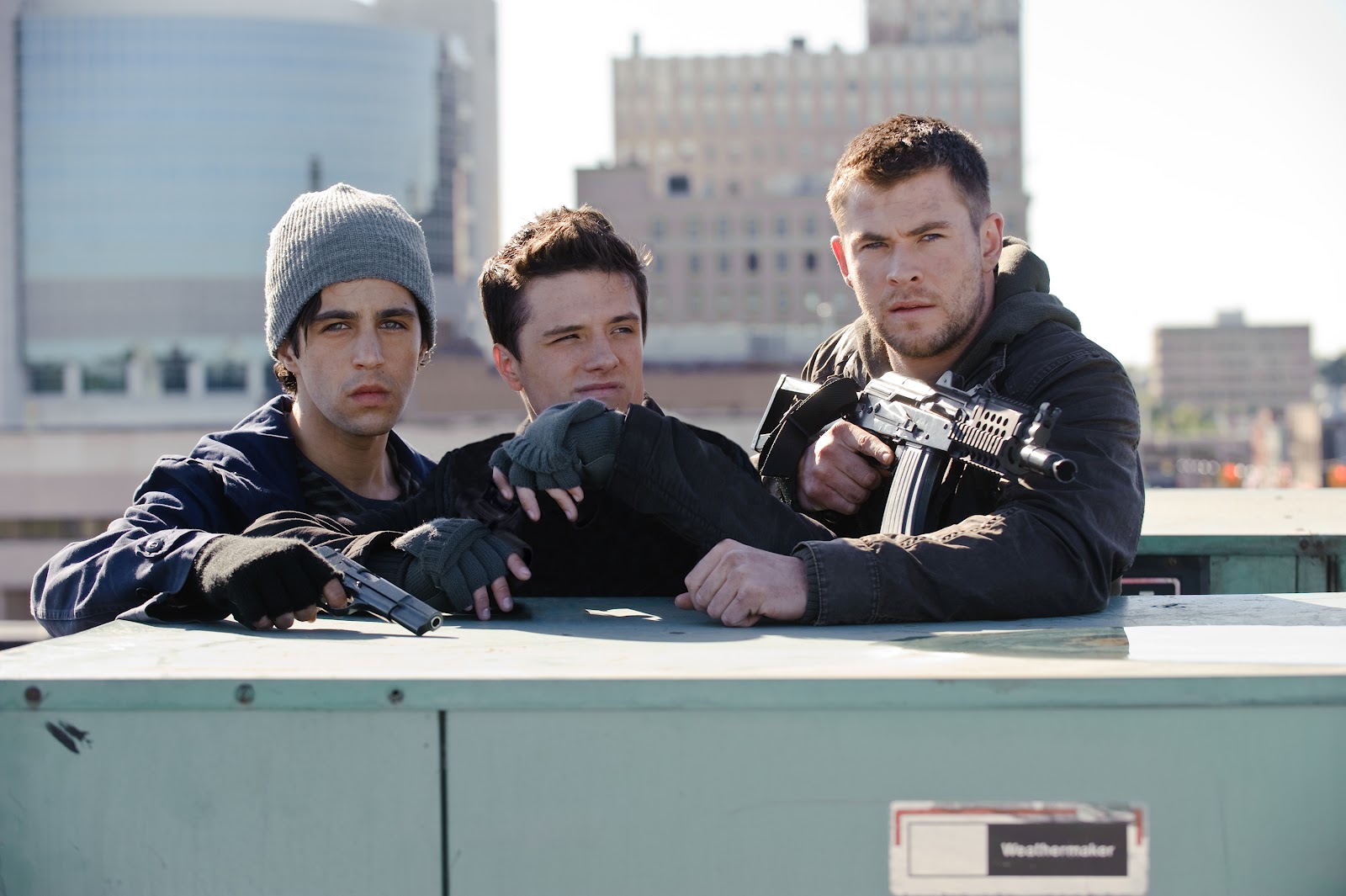 In Red Dawn, the remake of the 1984 Patrick-Swayze-starring original, North Korean soldiers drop from airplanes into the small town of Spokane, Washington, and they aren’t there to sightsee. Instead, these soldiers wave guns at bug-eyed Americans and shepherd them into barricaded camps where they are forced to wear orange jumpsuits and are told they are victims of a greedy and sinful Western culture. Although first-time director Dan Bradley doesn’t show us, I bet the camp food looks and tastes disgusting.

Not everyone in Spokane is captured and sent to arts and crafts at the prison camps. A little less than a dozen people, none of them older than mid-twenties, escape to a cabin in the surrounding wooded hillsides. Once at the cabin, a leader among the group emerges. His name is Jed Eckert (Chris Hemsworth), a marine visiting his high school quarterbacking little brother Matt (Josh Peck) while on leave. Matt has also made it to the cabin, along with friends Robert Kitner (Josh Hutcherson), Daryl Jenkins (Connor Cruise), and Toni Walsh (Adrianne Palicki). Matt’s girlfriend, Erica Martin (Isabel Lucas), was captured during the invasion and subsequently forced into an orange onesie. Luckily for those who did escape, Jed is a weapons wizard with combat experience and survival know-how. He’s an earnest patriot, too, and decides to train his civilian companions to become an elite guerilla warfare unit that will annoy the North Koreans like a flea in a dog’s hair. The unit is named the Wolverines, after the high school’s mascot. Can’t say the former students don’t have school pride.

With the North Korean invasion and the Wolverines formation in the rearview mirror, the stage is set for the two forces to face off in numerous skirmishes, each side making a move to thwart the other as if they’re playing one giant game of chess. This should leave us with roughly an hour and a half of involving action that makes our backs tense up and our eyes widen. That doesn’t happen, though. Yes, action does occur: guns fire, knives slash, and fists fly aplenty. But the action is more annoying than meaningful, thanks to Bradley’s literal shaky direction. Every few months a movie comes out that still abides by the Shaky Bible, a tome which states that jiggling the camera like the man behind it has just downed six Red Bulls during action scenes actually heightens the suspense for viewers. Dammit, Bradley, the Shaky Bible is wrong! A shaky camera doesn’t make a car chase more realistic; it just makes us want to upchuck in our popcorn after our eyes try and fail to follow the disconcerting scene unfolding onscreen.

As if shaking the camera isn’t enough to confuse, Bradley also gives us a claustrophobic vibe through exaggerated zoom-ins on characters. Bradley almost never pans out with the camera, depriving us of seeing the complete environment in which characters interact. I couldn’t tell where the heck the Wolverines were running off to after their battles because I never truly understood where they were. I recall snippets of streets, vacated buildings, and patches of woods. The visual potential of an enemy-occupied small town is never fulfilled.

Not all of Red Dawn’s negative components come from the director’s chair. Carl Ellsworth and Jeremy Passmore, the duo behind the typewriter, crafted a screenplay with a lazy plot and weak dialogue. A hefty portion of screen time is wasted on montages that show the Wolverines training in the woods or blowing things up in town. Not only do these montages muddle up the timeline by continually cutting to a future event we have no prior backstory on, they also do not drive the plot forward or build character development. When people aren’t too busy with explosives and ammunition to talk, they more often than not say things that aren’t believable given their miserable situation. The Wolverines are made up of kids whose parents have died and who face death every time they set out on a mission, and yet they still talk as if they aren’t affected by the horror of war; like it’s all some video game they can eject from whenever they want. Granted, there are some great military observations by Chris Hemsworth, such as, “Marines don’t die. They go to hell and regroup.” But an entertaining phrase now and then doesn’t make up for the flat dialogue that dominates the script.

As far as the actors delivering the dialogue goes, it’s a so-so ballgame. Josh Peck (TV’s Drake & Josh) stands out as the Golden Raspberry Award winner of the film. His screaming and snarls are too over-the-top when the bullets are flying, and his intent stare and empty smile seem out of place during peaceful moments. I love Peck from his Nickelodeon days, but that was comedy and this is supposed to be war. Hutcherson (2012’s The Hunger Games) as Robert is at first frightened of violence before becoming seduced by its necessity in his brave new world. He’s believable in transforming from a tech-savvy kid on his phone to a tech-savvy kid with a stick of C4 explosives. As the leader of the Wolverines, Hemsworth (2011’s Thor) is a great sigh of relief in a suffocating mess of a movie. He continues to prove he’s action movie material, preferring to let his eyes and jawline do the talking while still providing unequaled character depth. Another neat treat is Jeffrey Dean Morgan (2012’s The Possession) as Colonel Andy Tanner, a grizzled marine who comes to the Wolverines’ aid and informs them of the nationwide situation post-North Korean invasion. Morgan adds some much needed dry humor and likability to the story, though his screen time is much too short to save a ship that’s already sunk.

This remake floated in Movie Purgatory for over two years after its distributor, MGM, filed for Chapter 11 bankruptcy. Eventually FilmDistrict pulled it back to Earth and gave it a home this Thanksgiving holiday in theaters across the United States. It deserves nothing more than a direct-to-DVD release, however, because it’s an overall disappointment that lacks plot creativity, skill behind the camera, and solid acting. Remakes should be handled with care. This one was smashed beneath the heels of those behind and in front of the camera.

Two stars out of five (D)

Have any questions or comments for Derek or Zach? Like Tuesday Movie Men on Facebook and hit us up on Twitter @tuesdaymoviemen. We want to hear from all you movie maniacs!