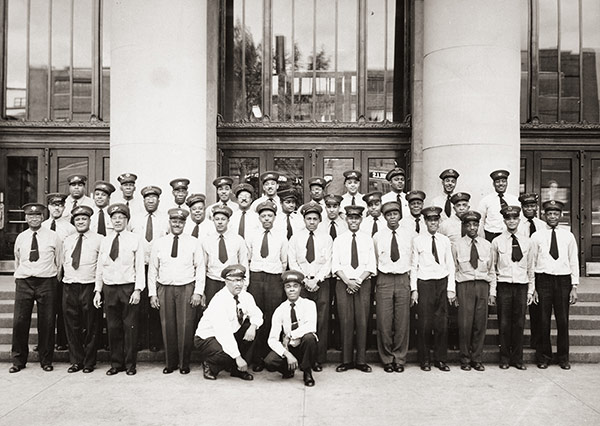 Long before luggage with wheels eliminated many travelers’ need for personal service, distinctively outfitted African-American porters were fixtures at train stations across America. The history of St. Paul’s Red Caps extended from the late 1800s to 1971, when the last passenger train pulled out of Union Depot.

Approaching a half-century later, the Red Caps will get permanent recognition this week with a ribbon-cutting of the Red Cap Room banquet hall at the newly refurbished and repurposed Union Depot. The dedication at 1 p.m. Friday also will kick off Rondo Days, the annual celebration of St. Paul’s black community named for its historic main street, which was bulldozed to make way for Interstate Hwy. 94.

The Red Cap Room, with a banquet capacity of 150, is one of four event spaces available for rent at Union Depot. The building, on the National Register of Historic Places since 1974, stood mostly vacant for decades until a $243 million restoration began in 2011. By next year, it is expected to be a hub for Amtrak trains, Central Corridor light rail, Jefferson Lines and Metro Transit buses and a bicycle facility.

Rondo Avenue and environs, where most St. Paul Red Caps lived, Union Depot and I-94 are all closely linked in transportation history, as freeway travel’s allure made passenger trains unprofitable. St. Paul’s Red Caps took a double whammy, losing both their homes and their jobs.

Former Red Caps James Melvin Young and Melvin Carter Sr. will be special guests at the dedication. A Rondo Days reception will be held from 4 to 6 p.m. the same day at the Red Cap Room, which the organizers say is “destined to become a premier venue for galas, dinners and conferences.”