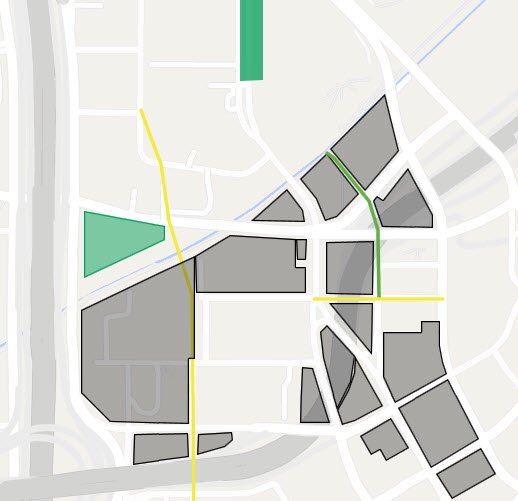 In today’s installment of Anatomy of a Proposed Urban Railway, Adam Miller takes a close look at the Royalston station area. Just to the south of this station area is an area of land isolated from its surroundings, but which has the potential to be a prime link between Royalston, North Loop, Loring Park, Downtown, and the north side within the next few decades. But to get the most value, we’d need to invest in building out more of a grid to connect these areas.

To avoid getting too far down the solutioning path, I’m not going to detail the specifics of how we could reconnect the grid in this area. But here are a few opportunities. The first would connect 10th Ave N (North Loop) to Border Ave (Royalston) to 15th Street (Loring Park), creating a backbone for these neighborhoods which could become a thriving commercial corridor. A second opportunity is the bridging of the Interstate 394 canyon between Loring Park, Downtown, and the Chestnut area.

The area has always been an inflection point between the angled downtown grid and the grids we find outside downtown, so there have always been strange block shapes and a lack of street continuity. The current trench with the BNSF Railway, Cedar Lake Trail, and future Southwest LRT west of Royalston was one of the original funnels of rail traffic through Downtown Minneapolis, so there’s never been a strong connection between the future Royalston station area and neighborhoods to the south.

Yet we’ve turned Royalston Ave into a island over the past half century, isolating it on all sides by non-human-scale infrastructure. To the west, Interstate 94 was built as a viaduct in the 1970s disconnecting the area from the Harrison and Sumner neighborhoods. On the east side, Ramp A and the Hawthorne Garage are recent destroyers of the grid, putting Glenwood Avenue into a tunnel of car storage before it emerges at the backside of the Target Center. At roughly the same time, Interstate 394 was carved through the middle of the neighborhood, providing access to massive government-subsidized car storage for commuters from the western suburbs.

The result is that the area is a shell of its former self:

Despite our best efforts to separate this land from the rest of the city, it is surrounded by areas that are witnessing massive public and private investment. Connecting these areas could help grow downtown, add tens of thousands of residents, and grow our tax base.

To the south: Loring Park

Loring Park has long been one of the densest residential neighborhoods in our region. Over the past five years, it has grown even more with residential infill projects. It’s in high demand yet locked in by freeways and other infrastructure, so it’s also one of the most expensive areas. Building human-scale connections to other neighborhoods would help ease some of this demand and lower housing prices overall.

To the north: Royalston Station on the Green Line 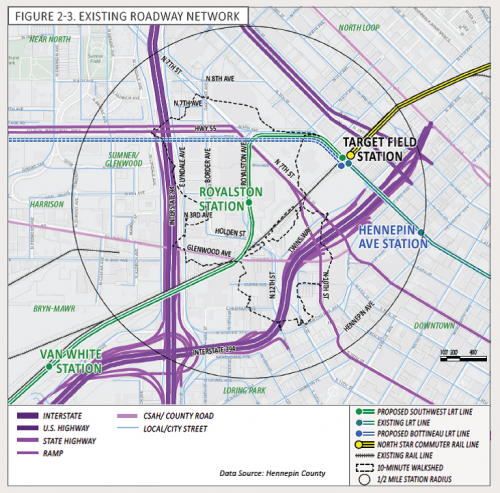 Royalston is currently a sea of light industrial land use and public disinvestment mixed with a few important pillars of our community such as Sharing and Caring Hands and the Minneapolis Farmers Market.

The station area vision is well thought out and would transform the neighborhood, but the Royalston neighborhood would still be disconnected (except by LRT) from places such as Chestnut, Loring Park, the North Loop, and Downtown.

Because of the barriers we’ve put up over the past half century, the 10-minute station walkshed is rather small. And much of the walking won’t be pleasant once beyond two blocks of the proposed station. By restoring a human-scale grid to the area, the station could serve the northernmost reaches of Loring Park and even the far southern end of Downtown.

To the east: Downtown!

For decades, the center of gravity in Downtown Minneapolis gradually shifted southward along Nicollet Mall. In the past few years, we’ve seen a resurgence of interest in the north end of Nicollet and the Downtown East neighborhood, following on the heels of massive residential growth of the North Loop and the Mill District. But the southern end of Downtown is still a hot market.

Due to favorable zoning and an existing cleared site, industry watchers continue to speculate on the potential for development on two blocks north of Hennepin Ave between 10th and 11th streets. What’s interesting about this is that the northern block is sandwiched between the I-394 trench and the giant Hawthorne parking garage. Yet this block, likely future home of a skyscraper, is within the 10-minute walkshed.

My takeaway? If we bridge the scars we’ve built with parking ramps and I-394, and work towards a walkable human-scale neighborhood, this transit station can actually serve parts of Loring Park and the southwest edge of the central business district.

This area is full of surface lots and low-intensity land uses, likely due to the island effect we’ve created. But what would happen if that were to change? We’d see a massive growth in demand for this land over the next few decades. As the Royalston station area plan develops and gaps are bridged to the North Loop, this will create a natural arc between the northern edges of Downtown and the river to the southern edge of the core and Loring Park.

In addition to the 5+ acres Bob Lux is looking to offload, Xcel Energy could eventually find it profitable to sell their 10 acre complex at Chestnut, and Minneapolis could find a new home for public works opening up the 4 acre complex behind Lee’s Liquor Lounge for incremental redevelopment. All said, the area between Royalston and Loring Park could witness up to 8 square blocks of redevelopment. That, by itself, would be transformative.

But there’s an even greater opportunity, one which opens up tens of millions of dollars worth of real estate while actually making everything around it more valuable and pleasant for human beings: air rights development over I-394. This would open up over six acres of real estate, adding development sites that could take the upward pressure off existing sites (indirectly helping housing affordability) while simultaneously adding significant tax revenue into our city and county.

This can make a huge impact financially. The adjacent Bob Lux block for sale (the old Ramada) pays $183,000 per year as a 2.18 acre undeveloped parking lot, or $83,890 per acre. A few blocks east, the main Target HQ block pays nearly $8 million dollars in property tax at a rate of $2.78 million per acre. Even if this area witnessed an increase to half of Target’s value per acre, this single block would result in a net increase of nearly $3 million in property tax revenue per year.

And that doesn’t even count the one-time sale of the air rights. On the east side of Downtown, Ryan is paying the city $5.65 million for the right to build a tower on top of a planned parking ramp. Now imagine the impact of that transformation across four air-rights parcels – the selling of the rights coupled with the yearly infusion of cash flow – and the marginal increase in value it would provide to all of the other parcels in this neighborhood. Suddenly air rights seem like a worthy investment.

It’s about the place, too

Increasing property value may sway minds within the city finance office or a development firm, but what’s in it for the rest of us? Better places. Which one would you prefer? 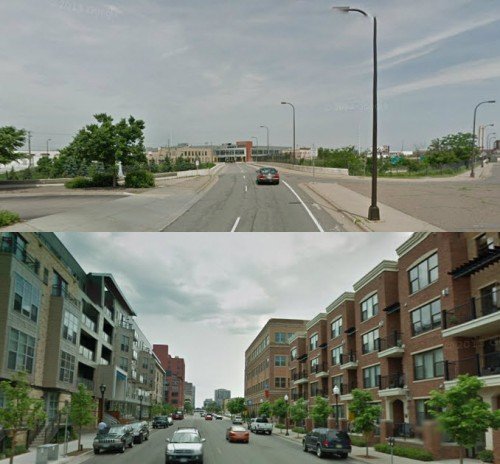