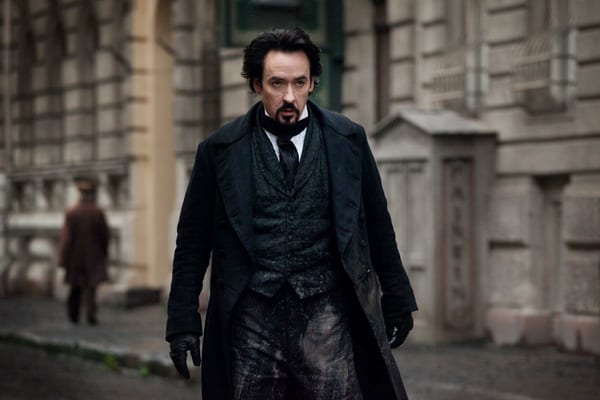 On October 3, 1849, Edgar Allan Poe, whose gothic literary tales would go on to influence both mainstream and horror fiction genres for the better part of two centuries, was found wandering the brick-paved streets of Baltimore. Poe was delirious and called out the name “Reynolds.” He was taken to Washington College Hospital, where he died of an unknown cause four days later. There are many hypotheses held by historical spectators as to the true cause of Poe’s death. Heart disease, rabies, cholera, and other ailments have all been blamed as Poe’s death bringer. None of these afflictions, however, are as creative and intriguing as director James McTeigue’s assumption, displayed in his movie The Raven, of what really caused Poe to close his eyes on this world forever.

Days before his death, Poe (John Cusack) is enduring a frustrating time in his life. He has returned to Baltimore to be with the younger, beautiful Emily Hamilton (Alice Eve). Hamilton is comfortable with Poe, but her father, Colonel Hamilton (Brendan Gleeson), is not. Hamilton dislikes Poe so much that he doesn’t blink at the thought of shooting him. This isn’t the average situation men who try to woo father’s daughters have to face…or is it?

Poe has a good friend to help him cope with the fear of facing Emily’s father: alcohol. The Gothic writer is never without a bottle of the mind-numbing liquid when he stumbles through rolling fogbanks. The “chug it till you can’t feel the pain” practice also lessens Poe’s frustration at his diminishing popularity in the literary world. He was once a world-renowned word scribbler (see “The Raven” or “The Tell-Tale Heart”), but now his published stories have ceased circulation and are forgotten to time by most of the bar dwellers with whom Poe argues.

When a brutal serial killer begins methodically murdering Baltimore citizens similar to the way Poe’s characters are offed in his fiction, Poe finds that even diving into the deepest bottle of spirits will not save him from life’s woes. Because he can seek out clues at the crime scene that are straight out of his stories, Poe is enlisted to help the police by stern, clean-shaven Detective Emmett Fields. And just when Poe thought he had enough on his to-do list, Emily is abducted and held as bait by the killer, putting Poe’s sanity through a meat grinder.

The screenplay, written by Ben Livingston and Hannah Shakespeare, is a mixed bag. There’s nothing glaringly wrong about what happens in the plot, but there are stretches of time where nothing seems to happen. This lack of action is frustrating because when the writers and director McTeigue do insert a suspenseful moment into the story—a knife-slicing murder, a chase through a sewer system, a kidnapping at a masked ball—they do so with breathtaking pacing and a flawless precision that’s comparable to the killer’s skillful techniques.

Now, don’t mistake me for a moviegoer who demands nothing but swordfights, high kicks, and rollicking explosions. I understand that character development and dialogue are more important than most action setups. The problem is that not enough of these elements are tossed into the gaps between the impressive action and extreme horror scenes; as a result, the gaps are as painfully noticeable as bone-jarring potholes.

Acting as cement filler for the potholes, Cusack makes every scene he’s in interesting by delivering a fine performance as Edgar Allan Poe. It’s a tough role to tackle, too. Just think of how much more negative criticism you risk receiving by portraying a real-life man who was a legacy, as opposed to bringing a fictional character to life. Since I don’t have access to a working time machine, I’ve never had the privilege of meeting Poe, but I know that according to written accounts he was a man with mood swings that were amplified by his frequent consumption of the hard stuff.

Cusack channels these tortured emotions in a performance that is reminiscent of Nicolas Cage’s most memorable screen time: whispering calmly one moment before hoarsely screaming and clutching at the nearest shirt collars the next moment. If you’re not a Cage fan, don’t worry: Cusack comes close to the cheesy lunacy line, but he never crosses it.

The supporting cast is filled with a wide range of characters, some of them compelling, some of them too vanilla flavored. I’m still not convinced that Alice Eve deserves to be getting leading lady movie roles. Eve doesn’t portray panic believably, and in The Raven she endures a lot of panic-stricken moments. When she was screaming and pounding the wall of her prison, it looked like she was pondering which Patrick Swayze movie she should watch later that night: Dirty Dancing or Road House?

At least Luke Evans’ turn as the determined detective on the case grew on me. At first, I thought that Fields was too stiff: all tight lips and no sense of humor. Well, Fields ended up being like that for the entire movie, but he became a likeable character because of the almost accidental chemistry between him and Poe. There’s a glaring, fun-to-watch contrast between Fields’ professional, all business attitude and Poe’s dry humor and dependence on the bottle. At one point in the film, Poe and Fields become reluctant roommates, and I crossed my fingers for some Odd Couple exploits, but McTeigue chose to go a different route.

The Raven is rated R, has a running time of 1 hour and 43 minutes, and was released to United States theaters on April 27, 2012.