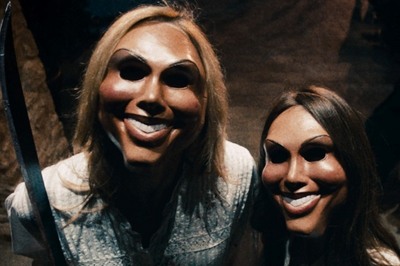 In the futuristic United States setting of writer/director James DeMonaco’s The Purge, the land of the free and the home of the brave is an unsettling place to live. Especially on that one day a year when, from seven in the evening to seven in the morning, all crime, including murder, is legal. No consequences for stabbing your over-demanding boss, shooting your noisy neighbor, or setting your annoying co-worker ablaze. Welcome to the year 2022.

This annual twelve-hour period of carnage is known as The Purge, established by the New Founding Fathers to allow folks to release their bottled-up hatred and bloodthirsty primal desires. It’s accepted and even welcomed by those who can afford to protect themselves with elaborate security systems and also those who like to hunt other humans. The homeless, without access to high-grade, steel door protection, don’t look forward to The Purge. They are all too often the prey of suburban weekend warriors who have made The Purge into a social class clash bathed in crimson.

Security system salesman James Sandin (Ethan Hawke) believes in the good The Purge does for America. Crime is down, poverty levels are down, and the economy’s on the upswing since the murder mania time slot was put into action. However, James doesn’t feel the need to kill, so when the emergency broadcast system announces the beginning of another Purge, he relaxes in the comforts of his fortified mansion with his wife, Mary (Lena Headey), his teenage daughter, Zoey (Adelaide Kane), and his pre-teen son, Charlie (Max Burkholder). Their evening of comfort behind steel covered windows and doors is interrupted when a bloody stranger (Edwin Hodge) comes hobbling onto their street, screaming for help. Charlie lets him into the house. This spontaneous act of hospitality does not please the mob of masked people after the stranger, whom their leader refers to as a “homeless swine” who lives only to be purged. The Sandin family is given an ultimatum: find the stranger and hand him over alive within one hour, or be killed by the mob who have reinforcements coming and know how to penetrate the locked-up home. It’s a crucial decision that isn’t easy to make.

At its core, The Purge is a home-invasion thriller with a few original ideas thrown in to spice up the old formula. The script, penned by director DeMonaco (who wrote the screenplay for the 2005 remake of Assault on Precinct 13, which also starred Ethan Hawke), provides a unique futuristic setting: a United States run by new leaders who approve killing and other crimes during one time period every year. The questions raised by this barbaric new world are intriguing. Could such a concept work? Would less crime actually occur throughout the rest of the year? Do humans have a savage side that needs to be let loose every now and then? These ideas are poked and prodded during interviews with criminologists and behavioral scientists that air on the Sandin’s televisions as they await The Purge’s commencement. James discusses the legitimacy of The Purge with his son, who doesn’t understand nor like the idea of what’s happening outside the walls of his home. Overall, DeMonaco’s alternate future reality is a chilling, original platform that makes you uneasy from the moment the film begins. It’s wonderful to see new ideas pop up in the thriller genre in the age of film retreads that we live in.

Though DeMonaco’s setting is grimly imaginative, the entire story is an uneven experience, due largely in part to the film’s sputtering third act. The first hour of The Purge is a masterful exercise in tension and a fantastic build-up to the home-invading horrors to come. The discussions of The Purge’s morality between father and son; the preparations of the Sandin’s neighbors, such as a man sharpening a machete in plain daylight; the eerie score by Nathan Whitehead (Desperate Housewives), which sometimes gives way to complete silence to amplify moments of breathless terror; all of these things and more provide worthwhile entertainment while also promising big payoffs to come.

Some of those payoffs come through, but some of them don’t. The first few scenes of the mob’s infiltration of the Sandin’s home deliver gory shocks as the Sandin’s fight back. The camera’s ability to capture every punch and knife slash in a steady lens allows you to get sucked into the action and see how realistic the fight choreography is. One scene in which James takes on three masked fiends in his family’s rec room is worth the ticket price alone. Axes, shotguns, knives, pool sticks, and billiard balls are put to use with bloody intentions, and the camera stays on the action until there’s only one person standing, giving you no time to breathe and likely pushing you forward off the backrest and onto the very edge of your seat. It’s a brilliant scene that ranks among the best action I’ve seen at the theater in years. 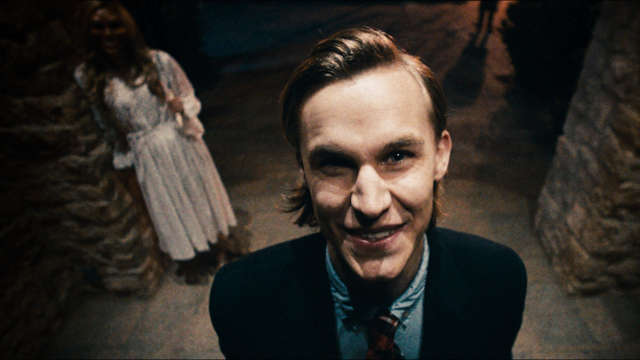 The film’s conclusion, taking place after the rec room brawl, isn’t nearly as memorable and feels out-of-place. DeMonaco throws a twist into the hide-and-seek house hunt that’s a real game-changer, but I thought it unnecessary as the game I was watching was really on a roll. Alas, this newfound twist slows down the carefully crafted momentum of the film and gives viewers too much room to breathe as things wind down. I wish DeMonaco would have stuck to his guns, but the prospect of pulling the rug out from under audiences must have been too tasty a prospect to pass up.

Oh well. The Purge still does its job as a thriller: it thrills. And with a healthy dose of horror thrown in by DeMonaco, it also chills as much as a morgue. God knows there are enough dead bodies by the end to fill a good-sized morgue. Anyway, in addition to a unique setting and an apprehensive build-up, there are fantastic performances by Hawke, Headey, Burkholder, and Rhys Wakefield as the leader of the mob, who should be a strong favorite to win Creepiest Smile of the Year award at the Oscars this year. There is a category for that now, isn’t there?

The Purge is rated R for strong disturbing violence and some language and was given a limited United States release on June 7, 2013.