On Saturday morning, 12/19/09, eight of us met at the intersection of Shoreline Drive and Ferndale Road West, about ¾ mile from the 7.8 million dollar mansion of United Health Group CEO Stephen Hemsley.  We had to spend some time at this location waiting for everyone to find their way to this meeting place.  So we put up some of our banners and talked to passers by. 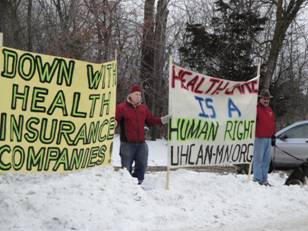 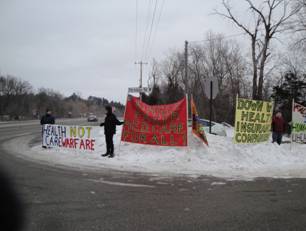 Not shown in these photos was a banner that really upset some of the locals that said, “HOME OF INS. BANDIT S. HEMSLEY”
Some of the people in the neighborhood supported us, but this guy was pretty upset! (see link, below) 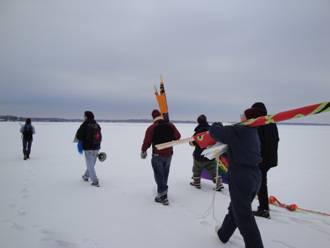 Stephen Hemsley is the CEO of the largest health insurance company in the United States, United Health Group, headquartered in Minnesota. Hemsley (I am not going to say, earned) was paid a salary of $3.2 million in 2007, which is nothing to sneeze at.  But his estimated $3/4 billion in stock options in United Health Group nearly rivals the stunning figure of $1.6 billion of Hemsley’s predecessor, William McGuire.  McGuire left in scandal after it was found out many of his stock options were improperly back dated.  Now we find that Hemsley might have had something to do with back dated stock options, too (see “American Medical News”, Jan 14, 2009).  No wonder United Health Group’s premiums are so high!  No wonder so many people in this country cannot afford health insurance.  Who profits?  Who dies? 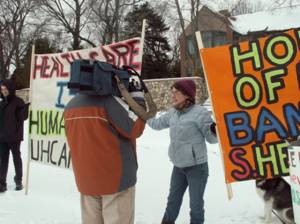 Elizabeth Frost, MD, a family practice doctor and co-chair of the Minnesota Physicians for a National Health Program and Joel Albers, Pharmacist and organizer of United Health Care Action Network spoke about our broken health care system and about what should be done to fix the problem.
Elizabeth said that protesters are furious that health care reform has been hijacked by the insurance industry.  She said they feel that health care is a right, not a privilege and are angry that reforms coming out of Washington are dictated by health and pharmaceutical industries through lobbying dollars.  Protesters also feel that it is time for the states to take matters into their own hands.  Seeing as health care reform is failing nationally, one thing they support is single payer reform at the state level in the form of the Minnesota Health Plan, authored by state Senator John Marty of Roseville.
Joel said, “We are out here today on the cold ice outside CEO Stephen J. Hemsley’s mansion, to point out the utter hypocrisy of United Health Group. UHG, with revenues of $80 billion a year, and profits of $4.5 billion a year, yeah that’s billion with a B, is the largest, most profiteering corporation in Minnesota. Their executives, including current CEO Stephen J. Hemsley, and if you include former CEO William McGuire, are the highest compensated in the history of Minnesota, much of this due to stock option fraud. Their billing practices alone are a racket, and most criminal, and the utter hypocrisy is United Hold-Up Group’s, yes Hold-Up Group’s recent denial of health insurance to a 2 year-old child named Aislin Bates, only because she was underweight for her age.
The denial letter to this 2 yr old child from UHG reads: “We are unable to provide coverage for Aislin because her height and weight do not meet our company standard.” Well, I am a pharmacist whose job it is to protect and uphold the public health, and I have a 2 yr old child, and United Hold-Up Group should know that when you insult one 2 yr old child by denying her health insurance and putting her at risk, you insult all of us, all children, their parents, all families of Minnesota and the U.S.A. Such vulgar disrespect for even one child is contemptible, should be illegal, along with many other “health insurance” company practices. And we need to continue to build this movement for a humane, fundamentally just health care system, a Medicare for All system, which has widespread support. We are everywhere. We’re seniors, youth, labor unions, disability groups, immigrants, citizen action, women’s groups, religious, small businesses, and we know what’s right- they know it too- we need Medicare for All, single-payer universal health care as a human right. And we need to end this dichotomy between need and greed.” 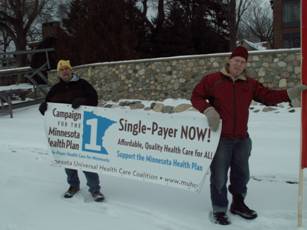 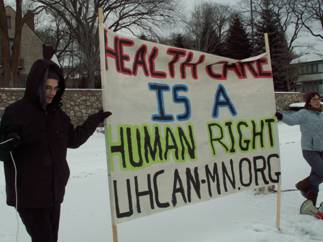 Here is the link to the Channel 4 news spot that covered our action:

Here is the link to the Channel 5 news spot that covered our action: