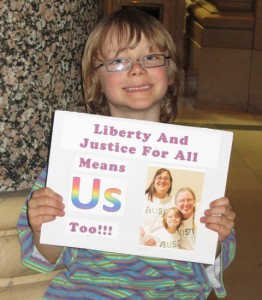 Last year when Senator Warren Limmer first proposed the anti-marriage amendment to Minnesota’s Constitution, my wife and I had many worries.

Of course we worried about the effect this would have on our family, and whether the unfair treatment we experience through state law would become a part of the Constitution. We dreaded the inevitable humiliation of a state-wide discussion about whether or not we are human beings deserving of basic civil rights — as if that were hypothetical. We dreaded being vilified, collateral damage in the quest to pass this piece of Constitutional bigotry. But most of all we worried about the effect on our son.

At 6-years-old Ian had thus far not encountered homophobia.

Sure, he knew it had existed in history and he knew that laws were not always fair to our family and community. But my sense was that he felt that people had just not gotten around to changing all the laws and were at worst just apathetic, since they were unaffected personally. He had gotten my “because decisions are made by those who show up” speech more than once when he asked why were attending a rally or contacting our legislators. But he had not encountered the idea that there were people in the here and now who still thought it was appropriate to set aside our community for unfair treatment, who felt that mistreating citizens and their families was an admirable goal.

His only inkling of such behavior and thoughts had centered around the wedding of friends of ours, when he had heard me comment to my sister that one bride’s parents appeared unhappy.

“How could they be unhappy about a wedding?” he had chimed in with surprise.

And so the topic was introduced. He learned that some people think women shouldn’t marry women and men shouldn’t marry men. But that small piece of info was in contrast to his experience for six years in a kind and welcoming world. He didn’t bring it up again or say anything more about it.

Then the anti-marriage amendment came into our world.

My wife and I discussed, as we often do with current events, whether or not the amendment was something to let Ian know about. We quickly decided it was too local and likely too long-term to keep from him. At age 6 when this all started, he would be 8 by the time it was on the ballot. He would hear something about it at school, or from friends, in our faith community or from family members. We knew we couldn’t hide it from him and wanted to make sure he had the facts and had a chance to ask us questions. As it turns out, his one question was whether the government was going to force us to get divorced.

At first I mourned that my son had to learn that homophobia still exists and therefore that people in this world are not always good and fair. The loss of innocence this was forcing on him saddened me greatly. But my wife Tina and I were also clear that it was up to us to help choose what the enduring lessons would be. While there was no avoiding that Ian was learning about the dark side of human beings living right in our state, at this very moment, we refused to let that be the only lesson. Tina pointed out how bad experiences could bring powerfully good lessons, such as when our house was broken into, and Ian’s “take-away” was that our friends had helped us and that we were so lucky to still have all the things the burglars left behind.

So, we set out to find the positive lessons he could learn from this hateful experience. Our hope was, and continues to be, that what could be a lesson in the bad and scary part of life, can instead become a positive lesson in the power each of us has to make the world a better place, one action at a time – that what Ian’s soul takes forward from a dark time, could, in fact, be filled with light. As I look back now on what we have learned and shared with him so far, the words of Hillel spring to mind.

If I am not for myself who will be for me?

One of the first things we taught Ian was that he could fight the feeling of powerlessness in the face of hatred by simply speaking out and saying what he knew to be true. That very day when we told him about the amendment and he reacted with anger and grief, we encouraged him to write a letter to Senator Warren Limmer, and right then, he dictated his words to me. Writing the letter brought many lessons – including the benefits of speaking respectfully, even when speaking to someone who has not been respectful, which led him to agree to edit out the “stupids” that appeared in his first draft.

Once the letter was sent off to Senator Limmer (who never did respond, even with a form letter), I suggested Ian consider sending copies to others. When I pointed out that it might help people to understand why it’s important to vote no, he was all for it. We sent copies to many legislators and posted it online as well. Recently it was re-posted on a blog, and people were reading it and commenting on it again.

Ian is sometimes very upset about the anti-marriage amendment, and talks with distress about how he just doesn’t understand why some people would be so mean. But when he hears that others are reading his letter and I share with him some of the comments we have received, I can definitely see a shift in Ian’s mood about the current state of things. In fact, he recently penned a new letter, beginning “Dear People Of Minnesota,” to give his 7-year-old take on why people should vote “no.”

And if I am only for myself, what am I?

Gratitude has been an immensely helpful lesson. We made a point of noticing and thanking those who stood by us. We found it particularly moving when friends whose families already have civil rights came to stand with us at the Capital on the day the amendment was approved. To see the hallways of the capital packed with people, almost all of whom were there to speak up for fairness was amazing.

Ian had a powerful interaction with Mayor RT Rybak at the Capital that day. Mayor Rybak got down on one knee, so he was at Ian’s level, and shook his hand. He told Ian it was so great that he was here because he would remember this – that he can think back to this night and think, “I remember that night and now things are better.” I sobbed and hugged him. We came home saddened by what our government was doing, but also felt so supported by those who stood with us.

Expressing gratitude among ourselves and to those who helped us became an important lesson. We wrote letters, emails, posted on Facebook pages and hugged and thanked in person those who stood with us. We could dwell on those who were seeking to harm us, but that would not suit the lifelong lessons. Instead we basked in gratitude to all those who were speaking out for fairness.

Another important lesson was to not make generalizations about others. It would be only too easy to lump all Republicans together in our frustration over the actions of some. But if we vilify others who are NOT a part of this attempt to harm our family and community, then we diminish ourselves. Tina and I agreed we would be careful to use specific names and speak about specific actions when expressing frustration, rather than making generalizations. We were careful to correct Ian when he would blame “The Republicans” and taught him instead to say “those who voted for the amendment” or “those who are in favor of the amendment.” I was gratified that when he wrote his second letter, the word “Republican” never came up (Nor did “stupid,” for that matter).

Helpful in this lesson in particular were the actions for justice that Republicans like John Kreisel took. As I wrote to Representative Kriesel: “My son, who is 6, was feeling very upset about the amendment and was saying that all Republicans are mean. I told him that I share his frustration, but that I also wanted him to remember that a man with no legs stood up for us, and that man is a Republican. Thank you for showing him the best of humanity, at a time when he is unfortunately learning about its dark side. ”

The empathy that being targeted for hateful treatment inspires is an important lesson to always carry forward. Now when we continue to teach Ian about standing up against Racism, protecting this country’s immigrants or supporting other religious minorities, we have a powerful connection to make in reminding him about all those who are standing with us now.

Empathy towards those who seek to harm us has been an important, yet difficult, lesson. Ian has struggled with what would cause someone to try to use the Constitution (as a young historian and patriot this misuse of our state’s founding document seems to really cut him to the quick) to – in his words – “be mean to our family” or “be mean to our community.”

On an even more basic level, he has expressed dismay at the existence of prejudice and why people would target any community for unfair treatment. We have talked about the different reasons people might be unfair to others – from simple ignorance about the effect of one’s actions, to firmly held religious beliefs that this type of behavior is required – and how hard it would be to feel compelled to do so. Standing up for fairness and equality does not mean lacking empathy for what leads people to work against those things. I remember him commenting in dismay during one of these discussions, “You don’t have to be afraid of someone just because they are different!” My response was: “And isn’t it lucky you have already learned that, when clearly some grown-ups still haven’t? Do you think it would be hard to go through life so afraid?” He just quietly nodded, taking that in.

And if not now, when?

We must live in this moment. Sometimes that means taking time and energy to deal with this amendment. But I also find this to be a reminder that there is more to our “now.” We have worked to protect Ian from this amendment encompassing his being for this year and a half.

In the first days after we explained the amendment to Ian and he wrote his first letter, it was a daily topic. We were conscious not to bring it up, but each day Ian would. I remember clearly a few weeks afterwards, when one day it didn’t come up at all. I felt relief that he could have days where he didn’t need to grapple with it (and I’m often grateful for having an extroverted kid who processes things aloud, so that I don’t have to wonder if he is struggling or not). There are still strings of days where he shares his struggle, punctuated by times where his mind is on wildlife rescue, American history, his friends, dancing, drawing, and his other passions, as they should be.

In the Talmud it is written: “Whoever teaches his son teaches not only his son but also his son’s son—and so on to the end of generations.” Our greatest hope is that the lessons Ian carries forward from this time in our state’s history will be the many positive ones.

Photo: Ian at the Capital