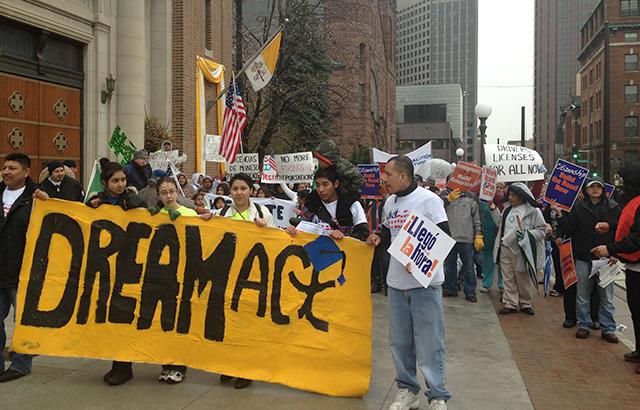 Rally-goers marching to the Minnesota State Capitol following passage by the Senate Wednesday afternoon of the "Path to Prosperity Act." (Photo by Juve Meza)

Wednesday was the third time over the years that the Minnesota Senate has passed a bill that would allow Minnesota’s undocumented college students to pay in-state tuition. Before, similar measures have died for lack of support outside that body.

This time is going to be different, says Sen. Sandy Pappas, DFL-St. Paul, author of this and similar bills for more than a decade. The prospects of the bill becoming law, she said, is “looking really, really good.’’

Pappas says the strategy this session is to add the tuition bill – which also includes a provision allowing qualified immigrants students to apply for state money to help pay college tuition — in conference committee as members of the House and Senate hash out differences in their omnibus higher education bills.

The chances of its becoming law are helped by the fact Pappas been named to that conference committee. And, Pappas says, there are signs powerful House members of the committee are behind the measure.

If the measure is enacted, Minnesota would become the fourth state in the country to offer undocumented students financial aid and the 16th to offer in-state tuition.

State higher-education officials have said the cost would be an estimated $539,000 a year, about 0.03 percent of the State Grant, Minnesota’s student aid program. That would be equivalent to adding two students to every college in the state. Fewer than 500 immigrant students are expected to apply each year.

“We’re only halfway there, but I’m pretty confident. This is something we have been working on for a long time. It’s a great day to be a Minnesotan,’’ says Juventino Meza, lead person on the legislation for the Citizens League.

About 40 supporters, including many Latinos, sat in the Senate gallery to observe the Senate vote with many then heading outdoors to join a rally of a few hundred people supporting immigration reform.

Rep. Carlos Mariani, DFL-St. Paul, author of a similar bill in the House, says his bill did not have the votes to pass out of committee. The chairman had other issues that had higher priority, according to Mariani.