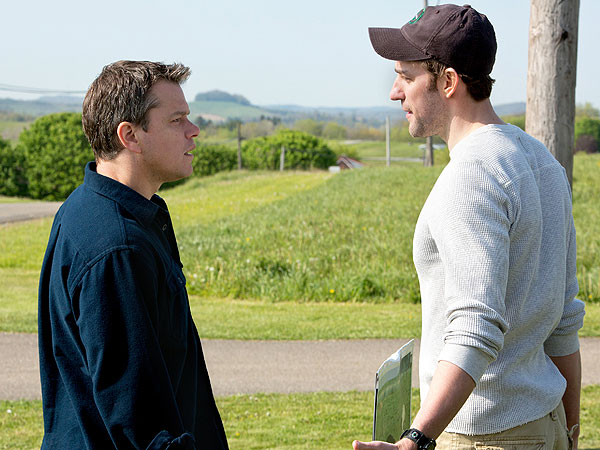 “We’re not fighting for land, we’re fighting for people,” explains Dustin Noble (John Krasinski), a spokesperson for a small environmental activist group called Athena. Dustin is speaking to a man named Steve Butler (Matt Damon) when he unleashes that quote. Steve represents a much larger company, a company worth $9 billion, to be exact. This company is called Global, a corporation that specializes in extracting natural gas from shale rocks miles below the Earth’s surface through a drilling process known as fracking. Harvesting this natural gas is a big moneymaker for Global, thus their $9 billion worth. It can also fatten the wallets of people who own land where Global wants to drill, for these people are offered contracts with numerous financial incentives, including advance sums and future partnership supplements, all for the permission to drill on their property.

Now, back to those two gentlemen. Dustin and Steve sit in different dugouts when it comes to fracking. Dustin claims his family’s farm was destroyed after they let Global drill on their land. The crops and grass withered and died. The water became so polluted it was flammable. And in a cruel version of cow tipping, Dustin’s cows fell on their sides for good after ingesting contaminants. Dustin knows fracking involves not only a big ol’ drill, but also the injection of powerful chemicals into the earth. A former Nebraskan farm boy turned wandering environmentalist in the wake of his farm’s demise, Dustin firmly believes the chemicals used in fracking infect the land around it like a creeping plague. That’s why Dustin has traveled to a small town in Pennsylvania where Steve and co-worker Sue Thomason (Frances McDormand) are making a pitch to the townspeople to get permission to drill. Dustin wants to stop them.

Steve is irked. It is, after all, his employer that Dustin is trashing, and he believes every word coming out of Dustin’s mouth is a lie, and that for every person Dustin convinces not to sign with Global, that’s one more person who will miss out on making thousands, if not millions, of dollars in the future. These are poor people, too, farmers who have seen better days and desperately need hope for their children. They haven’t been finding that hope out in the fields lately, so when Steve knocks on their door with a contract under his arm, it could be the only hope to come around in a long while.

With some prodding from the wise old high school science teacher, Frank Yates (Hal Holbrook), the town agrees to take two weeks to think it over before executing a final vote on the decision to ultimately let in or deny fracking in their town. Steve and Dustin have two weeks to make their cases to as many people as they can talk to. Let the door knocking begin!

This is a film about conflicted interests, but it’s the time spent on the people with those interests that make the story so endearing. True, the hub of the story is not a person, but a controversial practice: fracking. I knew almost nothing about fracking when I walked into the theater to see this movie. Thanks to screenwriters John Krasinski and Matt Damon, as well as story developer Dave Eggers, I can now say that although I still don’t understand the intricate details of fracking, I do fully comprehend its broad concept, and that’s including both the pros and cons of the practice. Krasinski and Damon devote a good chunk of dialogue in their screenplay to characters exploring fracking from every angle in discussions that take place in a squeaky school gymnasium, on creaky front porches, and in sun-splashed kitchens. Fracking is looked at through both a good and bad lens. The movie doesn’t take a side until late in the game, leaving you waiting in anticipation to see what side of the issue the town—and perhaps consequently you—will fall on. This withholding of the “right view” on fracking infuses the storyline with top-grade suspense that is indebted to Krasinski’s and Damon’s clever, patient script and director Gus Van Sant’s (1997’s Good Will Hunting) masterful direction.

Now, back to those people I was talking about. The people in this story are the most important piece of this puzzle. They are the ones who have to decide whether or not they want to risk their town for bags of cash. Everybody from Rob (Titus Welliver), who owns Rob’s Guns and Groceries, to elementary schoolteacher Alice (Rosemarie DeWitt), to Jesse the Bartender (Gerri Bumbaugh), has a stake to claim, or deny, in this whirlwind scenario the town finds itself in. These rural townsfolk are not treated as stock characters. They are handled with as much care as the fracking issue itself, allowing you to see different sides of them that you normally wouldn’t see in a run-of-the-mill farmyard flick. The bad economy has taken the pep of life out of a lot of the folks Steve and Dustin visit, and getting to see the raw worry beneath the small talk smiles of the mothers and fathers of the fields is more than a little unnerving.

The two characters who do simply matter more than the rest are Steve and Dustin. It is their speeches, handshakes, and smiles, after all, that will greatly influence the future of the town. Van Sant ensures that we get to know both of these men well during their frantic search for pledges and signatures. It’s painful to get to know Steve, as you become exposed to his self-doubt, anger, and outright cockiness. Dustin instead brings a smile to your face with his “aw-shucks” grin and straight shot of humor. But both characters show surprises when their truest of character traits are forced into the light in a pulse-pounding story shift that still has me reeling.

Aside from an unsatisfying conclusion to McDormand’s character arc, Promised Land is a fascinating look into humans and their interactions with each other and the land they live on. I highly recommend this movie to anybody who loves to watch Damon and/or Krasinski in top-form, or to anyone who loves the rolling hills of the country and the peaceful, slower lifestyle that can be found there. Van Sant and company know how to tell a compelling story with plausible suspense. And the characters here are the type of folks you could easily sit down with and have a slice of pie and a cup of coffee, with a large side of conversation, of course.

Promised Land is rated R for language, has a runtime of 1 hour and 46 minutes, and was given a wide United States release on January 4, 2013.