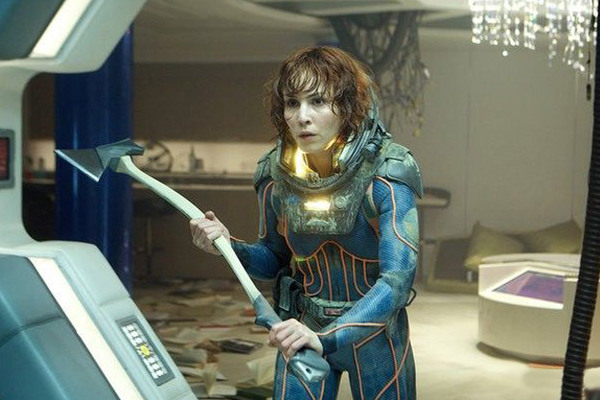 Leaving the theater after watching director Ridley Scott’s Prometheus, I felt like I did not just watch a movie. Instead, I had experienced the vivid flashes of somebody’s real-life experience. Everyone in Theater 14 of the Carmike Wynnsong cinema had surely walked through a detailed digitally rendered nightmare. The story was so absorbing, the special effects so real, the characters so well-acted, that seeing Prometheus was more a visceral experience than a watched film. The high levels of energy and reality in Scott’s latest film are comparable with movies like Borderland (2007), Platoon (1986), and The Collector (2009).

The year is 2093. 17 people are aboard the Prometheus, a spaceship headed to a distant moon of a distant planet. The moon is thought to hold advanced life forms. Weyland Corporation, a rich business from Earth, is funding the expedition. Archeologists Elizabeth Shaw (Noomi Rapace) and Charlie Holloway (Logan Marshall-Green) found similar cave drawings all over Earth that they believe are invitations to their destined moon. This isn’t just another space expedition in another sci-fi movie, though, because Shaw and Holloway believe that the aliens on the moon in the far reaches of space are the creators of human life. In other words, Shaw and Holloway want to have a Q and A session with their makers: an interview with tangible Gods.

Joining the two God seekers are Prometheus’ captain, Janek (Idris Elba); the representative of Weyland Corporation, Meredith Vickers (Charlize Theron); the human-looking android, David (Michael Fassbender), and a host of others. Once on the moon, Prometheus’ crew is faced with the scary and exciting possibility that Shaw and Holloway aren’t two overly optimistic scientists with unrealistic expectations, because signs of alien life with strong links to human beings are soon discovered. Unfortunately for the travelers, in deep space things can go south in a hurry, especially when slimy snake-things wiggle through the dark puddles at peoples’ feet.

A huge part of what makes Prometheus seem like real-life footage is its special effects. In early June I wrote that Snow White and the Huntsman had the best CGI since Rise of the Planet of the Apes. I still stand behind that statement, but Prometheus trumps both of those films when it comes to high quality CGI. The moon visited by Prometheus looks like something that exists in our universe. Pointy rock structures, hard-packed soil, and billowing, massive sandstorms dot the landscape. Scott doesn’t have his characters move around much after they land, but the slice of land from the ship to the mysterious alien structures is enough to keep your eyeballs roaming over the screen, intent on soaking up every mind-blowing, crystal clear detail. And when the team is not traipsing around outside, the inside of Prometheus is also a spectacle to see and treasure—from the sleep chambers to the cockpit.

While the world of Prometheus looks shiny, sleek, and foreboding, appearances alone do not make a movie. So it’s a good thing the characters that walk around in this sci-fi environment are a damn interesting group of people. Scott has an A-list cast to work with, along with some unknowns who hold their own. Everybody shows up. There are no weak links to be found here.

Spaihts and Lindelof insert an abundance of rich, individualized characters in their story. Most of those present are not satisfied with being mere victims to vicious alien attacks. These fine folks have opinions of their quest, viewpoints on religion, and a remarkable resilience to the insistent clutches of death.

Rapace is an engaging, sympathetic, tough woman who’s willing to go to the extreme to survive…and what she does to survive will more than likely make you shudder. Her unyielding resolve may remind you of Sigourney Weaver’s Ellen Ripley from Scott’s 1979 horror classic, Alien (and its three sequels), but that’s where the similarities end. Rapace creates a likeable character from the ground up, instilling her own blend of innocent faith and teeth-clenching anger.

Riding a wave of commercial and critical success from films like Inglorious Basterds (2009), Shame (2011), and Haywire (2011), Fassbender turns in another perfect portrayal with his convincing role as a robot. Fassbender uses rigid, consistent body motions, a precise, deliberate vocal tone, and wide, observational eyes to remind us that he isn’t human. He’s too perfect to be human. Fassbender never falters with this difficult role, putting in a strong bid for best supporting actor of 2012.

The screenplay flawlessly balances philosophy and action. Lindelof and Spaihts give most characters enough dialogue to establish their motives and beliefs before they are put in life-or-death situations. You can empathize with everyone to some point, making every scene interesting because it involves at least one person to care about. One life-or-death situation involves Rapace and an automated surgery table. This scene is one of the most suspenseful events I’ve ever watched in a movie; it alone earns the film’s R-rating and will be discussed late into the night by movie hounds for decades to come.

I give Prometheus 5 stars out of 5, an A+. What an amazing, thought provoking ride.

Prometheus is rated R, has a runtime of 2 hours and 4 minutes, and was given a wide release in United States theaters on June 8, 2012.