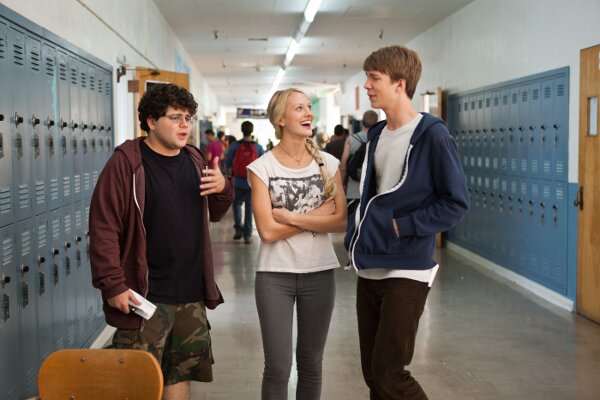 When high school senior Thomas’s (Thomas Mann) parents go out of town for the weekend, Thomas and his two best friends Costa (Oliver Cooper) and JB (Jonathan Daniel Brown) are left with the ideal situation for debauchery. Empty house, no adult supervision, and wouldn’t you know it, Thomas is celebrating his seventeenth birthday. Enter Costa, the all too eager party planner whose immediate goal is to transform himself and his two buddies from unknown bully fodder to legendary ladies’ men. So begins director Nima Nourizadeh’s handheld camera point of view movie, Project X, a tale that cleverly portrays the mounting chaos of a high school party.

Costa, a restless boy with a high voice that could easily cut through the uniform chatter of a crowded room, is very insistent on getting many people to Thomas’s house for the birthday party. For every person that walks into Thomas’s front yard, the odds that the trio of unknowns will become popular and loved in the halls of their high school goes up a little more; as does the chance to get familiar with the womenfolk. Costa realizes this hypothesis and pursues its success with a feverish desire. We see him talk to people. We see him text people. We see him flip off the people who decline his invitations.

These early scenes, before the DJ plays the first party song, are fun to watch because they establish the main three characters by showing how they interact with others. Costa is rude, loud, and desperate to have sex. Thomas is reluctant and shy. JB is, well, a little intriguing and quite a bit weird.

Nourizadeh then takes these established characters and places them into a crowd-surging zone of chaos. Because when the clock hits 9:20 P.M., guests start to pour into the party, and you can quickly see that Costa did too good of a job advertising the birthday bash, especially when the guest list hits the 1,500 mark.

Screenwriters Matt Drake and Michael Bacall give their protagonists enough interesting things to do at the party to make us care about what is happening. Thomas goes through the classic subplot of deciding whether he should make a move on a longtime friend, in this case a spunky blonde by the name of Kirby (Kirby Bliss Blanton). Costa has hilarious shouting confrontations with an irate neighbor who is a big threat to the party’s survival. And JB, wearing sharp dress clothes, makes moves on a number of ladies.

The real spectacle to watch, however, is the party itself. If you have seen the trailer for Project X, then you know the party ends up turning Thomas’s house and the surrounding neighborhood into a fiery, out-of-control mess. Although that ultimate destruction may have been the hook to get a lot of people into the theater, it takes a while for the party to get that way. Thank goodness, too. A lot of the fun in Project X is derived from the anticipation of things to go horribly wrong. You’re literally waiting for an explosion, not knowing how or when it’s going to come into fruition.

While we wait for the party to reach its climax, we’re treated to a subplot involving two security guards. The guards are boys around eleven years old. They wield Tasers, nightsticks, official uniforms, and all-business attitudes to keep the party from getting out of hand. You can argue that these guards failed miserably because Thomas’s house is set on fire and his dad’s car is driven into the swimming pool, but hey, they were understaffed.

We see most of the party through the lens of a handheld camera that’s hoisted around by Dax (Dax Flame), a quiet Goth boy who is Costa’s classmate. It’s interesting to see the found footage technique used in a comedy, because it’s a style primarily reserved for horror movies. The technique works well here. Watching events unfold from Dax’s camera made me feel like I was being carried around the party. Bear foam, fistfights, and make-out sessions have a raw feel about them. And for those of you who are wary of motion sickness, have no fear: Dax has a steady hand.

I can’t say that Project X is a great movie, but it is an entertaining 88 minutes that will appeal to those who like in-your-face raunchy comedies. There isn’t as much substance and memorable acting as there was in Superbad, but chances are if you enjoy seeing Jonah Hill stumble through a crazy night of a parent’s worst nightmare, then you’ll also enjoy watching a cast of relatively unknowns party until the break of dawn.

Three and one-half stars out of five, in other words, a solid, worthwhile B.

Project X was released in cinemas across the country on March 2, 2012. It is rated R and has a running time of 1 hour and 27 minutes.