Construction of the $12 million new Walker Library at Lagoon and Hennepin seems to be right on schedule. The Hennepin County Library System says, “We’re looking forward to re-opening the library in mid-2014.”

Demolition of the old building was completed just last month. That building, with its iconic “LIBRARY” letters echoing “HOLLYWOOD” in Beverly Hills, had its two major floors underground. In 1981 that seemed like a brilliant idea to conserve energy. Unfortunately, two problems resulted from that design decision: Water seeped in and patrons were not thrilled about going into a sub-subbasement to look for a book. Also, there were some concerns about the load stress of vehicles in the parking lot over the heads of readers two stories below.

The new design will have bright windows for patrons on the first floor and 21 spaces for parking underground. The size will be smaller: 14,680 square feet of space as opposed to 18,500 square feet in the 1981 underground bunker, but, in an era when everyone is predicting the end of the printed word, the new building will be a visible testament to the continued value of books. 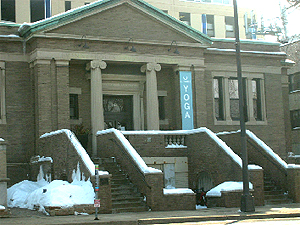 The first Walker Library sits across the street and watches the new construction with amused detachment. Sitting high above Hennepin Avenue, a grand staircase leading to Greek columns supporting an impressive portico, this building said clearly when it was built that it was a temple of learning. Just climbing the steps was meant to be an ennobling meditation. Built in 1911 on land donated by T. B. Walker (yes, the same Walker of Walker Art Center, Walker Church, etc.) who was president of the Library Board at the time, it was constructed to coincide with the first streetcar line to run from downtown to Lake Street on Hennepin Avenue. The streetcar made it easy for workers to live south of Lake Street and commute to work, and the library was intended to provide cultural enrichment for their leisure time.

Walker is not the only library Hennepin County is constructing. The new library in Brooklyn Park will cost $23.5 million, and new construction of an Excelsior library will cost $5.6 million. They are both still in design phase. The rehabilitation of the Roosevelt library is expected to be complete this year at a cost of $3.2 million.

It speaks well of our community that even in times of budget crises and government cutbacks on services, there is still a public commitment to provide resources for learning.