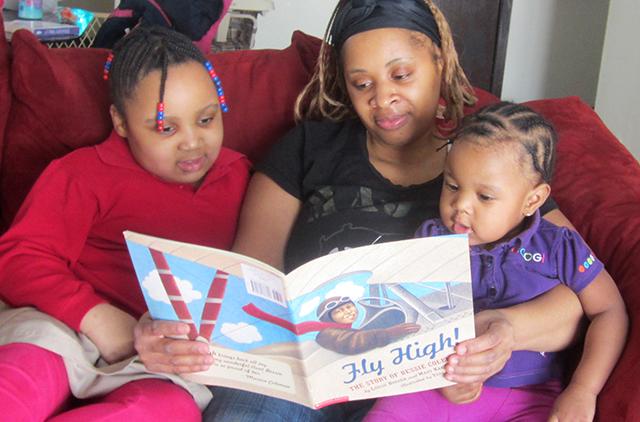 Hope Davis reads to her daughters, Danaviah and Tania. (Photo courtesy Network for the Development of Children of African Descent)

Yet more than a welcoming place, supporters say, the Network for the Development of Children of African Descent (NdCAD) is the launching pad to a better life.

Children enrolled in their programs do better in school. Their parents learn support and advocacy skills. Both learn pride in their African roots.

“It has changed each one of us and our lives a lot, being aware of who we are and where we came from. We’re not just descendants of slaves,’’ parent Tamara York said recently.

In tribute to such accomplishments, last year its executive director, Gevonee Ford, received the White House’s Champions of Change award for founding the culture-based family and literacy education center.

“We believe that cultural identity provides the foundation not only for school success, but for life-long learning and success,’’ said Ford, who in 1997 established the network housed in an old building in a Midway neighborhood in St. Paul. Before that, Ford, who has a background in early childhood education and integrative studies, headed the Cultural Beginnings Project, a private-public-sector collaboration.

At NdCAD parents enroll their young children in the nine-week, phonics-based Sankofa Reading Program and sign themselves up for Parent Power Literacy & Advocacy Workshops, efforts started in 2004. About 100 children a year go through the program, which attracts children from school districts around the Twin Cities.

Kids improve their reading proficiency, thus building the foundation for a lifetime of learning, staff and parents say. There is a special focus on children in kindergarten through third grade but reading help may continue through eighth grade.

Parents learn how to help their children learn. Everyone has access to a lending library of about 2,000 books, all written about or by persons of African descent. Saturdays, families come to book give-aways, other days for special events. (Yes, they do accept book donations.)

Somewhat uniquely, curriculum for both children and parents revolves around the culture, history and accomplishments of Africans and African-Americans, and the significant role they’ve played throughout history.

Those accomplishments go far beyond the contributions of Rosa Parks, Martin Luther King Jr. and Malcolm X, harking back to Africa being the birthplace of civilization, says Hannatu Green, parent-outreach worker with the program.

“We see the greatest change in the parents,’’ she said. “We reconnect [them] to the roots of their ancestry rather than what we were told in enslavement.” The adults begin to realize the proud achievements of Africans and African-Americans in this country and around the world, she said.

“We are everything America says we are not,’’ said mom Tracy Robinson. “We are standing on the backs of greatness, of African-American heroes, inventors, doctors, lawyers and scientists,’’ says Robinson, who grew up in North Minneapolis. She and her husband had already taught their children much about African culture, but at NdCAD, her children are introduced to scores of “beautiful books” by and about their people.

There’s a different kind of value for Tina Kinchelow, mother of a bi-racial child who came into the reading program at age 4 and is now reading well, according to her mom. The program “helps me to know her culture,’’ Kinchelow says. 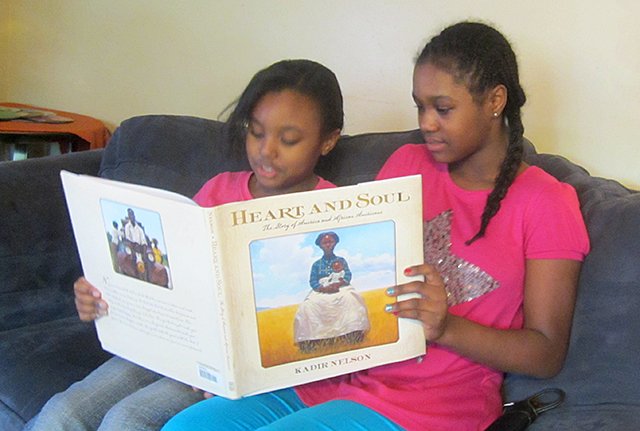 Ulyssa and her sister Kenshell reading “Heart and Soul” by Kadir Nelson. (Photo courtesy Network for the Development of Children of African Descent)

An evaluation of the reading program completed last year by GrayHall LLP, a research and management consulting firm in St. Paul, demonstrated significant reading improvement for participants. Of the 333 kindergarten through eighth grade students finishing the Sankofa program, 65 percent met or exceeded their reading targets, according to their report.

Minneapolis Public Schools has given the program its seal of approval after rigorous analysis and chosen it as one of eight after-school tutoring providers for district students. NdCAD services will be offered at two Minneapolis schools and one community site during the upcoming school year and will receive Title I funding. Any student, regardless of race, can enroll.

“We value their partnership and commitment to MPPS students and families,’’ said Nicole North, director of the district’s funded programs and school improvement.

Sitting comfortably around an ornate table in a room outfitted as a well-appointed living room, the moms describe their cultural education. They praise a curriculum that has exposed them to a variety of history and media, including the PBS documentary “Slavery by Another Name’’ and books such as “The New Jim Crow” by Michelle Alexander, as well as Kwanzaa practices which celebrate family, community and culture.

The women say they’ve also learned through the program the importance of partnering with schools and their child’s teacher to help children attain the skills necessary to decode words and build reading comprehension.

They feel empowered to stand up and advocate for their children. One mom tells how she moved her child away from a school where he had struggled and had behavior problems to a different school where he is thriving.

Now they know the “language” of schools and teachers, Robinson says. Before, she says, when her child had problems at school, “I didn’t have the right words. I didn’t know what to say.’’

The parents say the program teaches their children self-respect and self-confidence.

For these women, however, NdCAD is a second home and a place of hope. “There’s nothing like being in the presence of your own people,’’ said York.