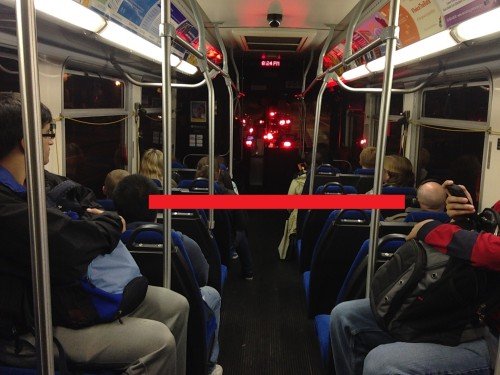 I recently rode a bus with my girlfriend from my house to the Science Museum of Minnesota. When we boarded, she went first using a transit pass, while I opted to go last since I paid in cash and would not hold up the bus since it could start moving while I paid. When I had finished paying, my girlfriend had already picked a spot and I sat next to her; she was on the outside of the bus, next to the windows and I was next to the aisle. I looked up and down the bus and noticed that only one woman was sitting in a forward facing seat, next to the aisle. A small sample size for sure, less than ten women on the bus the whole ride, but through the entire ride I noticed some striking ways in how people seemed to choose their seats.

A few women boarded the bus during the journey and all either stood or sat near the front of the bus; if they sat down they seemed to try to get a seat in the sideways facing seats. The one woman who sat in a forward facing seat on the aisle had a small child who seemed very excited to do anything at all. Any woman riding with an adult male sat on the outside of the bus, while her companion for the journey sat on the inside, next to the aisle.

I did not survey riders and why they sat in the positions they did, but I speculated and thought of two reasons for seat choice. These are only my thoughts; everyone has specific reasons and I am surely not including everyone here.

Women tended to stay closer to the driver and either were buffered by a male companion sitting on the aisle or sat in a seat not constrained by another row. The woman with a child who sat facing forward in the constrained seats seemed to do so intentionally to keep her child from running around the bus, and keeping the child in a space where activity wouldn’t bother anyone, nor would anyone have access to the child.

Janne Flisrand said on why she chooses her seats, “It’s not ’cause I feel scared or vulnerable, it’s more like staying out of the way or visible to ‘authority’ because the odds of being bullied/hassled are lower there. I think about it in the same way nerds in a high school are likely to avoid the most aggressive jocks — not because every time they go there they get shoved in a locker, but if you remain unseen then you remain unhassled.”

While these are only conjectures, it seems that women had to think about their seating arrangements, maybe not consciously, but at some point a seating “strategy” had been ingrained. More women had to think about what they would do if someone started bullying or harassing them. Generally, I don’t have to worry about being threatened with sexual violence, or not being left alone, or simply being ogled uncomfortably, all things I have witnessed – towards women, minorities, and people who identify as LGBTQ – in various spheres of public life, including buses.

This suggests that over half of the population might be uncomfortable in public spheres. No matter how we are born or identify, we should not have to feel wary in public places, we should not have to think about seats on the bus in terms of when the creeper gets on or if someone makes an inappropriate remark or an unwelcome advance. Ensuring all people are welcomed in the public sphere is part of having any public sphere at all. If any portion of the population feels like they cannot fully utilize the service or the space or have to do extra work to be comfortable using the space, it is no longer truly public, but a space or service for those who are not likely to be bullied.

Everyone can step up to combat harassment. By ensuring friends know, recognize and understand when they say something objectionable and that you are opposed to that behavior, to intervening (please don’t be a white knight, but ask if someone would like assistance) you play a role toward ensuring everyone’s comfort in public spaces.

Please comment with your experience on buses, why you sit where you do, and anything else to expand this discussion.

I would like to thank Janne for proofreading this, as well as leading discussions on privilege for streets.mn, I would like to thank L.K. for a post that allowed people to express their own experiences with unwanted attention on transit, and Cassie for explaining in the comments how to intervene without being a white knight. Bill also has a good MinnPost article on street harassment.

I would also like everyone to read this article about how bicycling provides a great lens for how to view what people mean when they say privilege. I would encourage everyone to also read Cards Against Harrassment, and watch the YouTube channel, for what really opened my eyes to some instances of street harassment I didn’t recognize before watching her videos, but now notice fairly often.

Photo at top: Articulated bus, leaving the University of Minnesota Campus, only 3 people who I believed to identify as women sat behind the red line drawn on this photo.