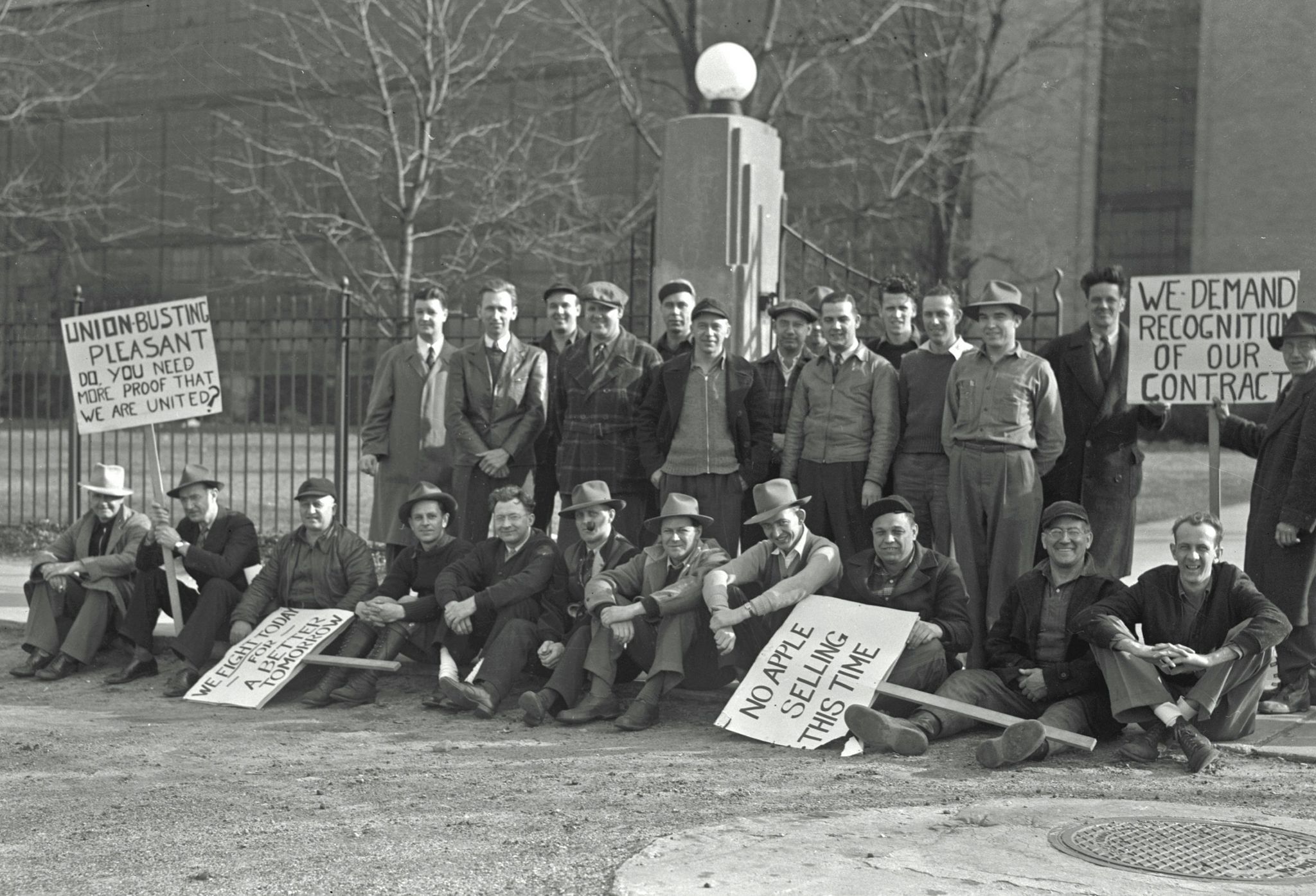 Recent experiences suggest that the generations-old practice of collective bargaining as the normal, if not dominant, method of negotiating the terms of unionized employment is losing its legitimacy. Notoriously, upon taking office in January 2010, Wisconsin’s Governor Walker introduced a bill to strip public employees of their collective bargaining rights. Despite a massive upheaval and a series of electoral and legal challenges, Act 10 is now the law of the Badger State. And last year in Seattle, when 30,000 workers, represented by the International Association of Machinists, rejected Boeing’s insistence on a restructuring of their pensions and an unprecedented eight year extension, Boeing blackmailed them into a revote by threatening to move their work to another state. Management’s demand just squeaked by in the second vote. In Chattanooga last month, when Volkswagen management announced it would remain neutral in the face of a United Auto Workers’ organizing drive, Republican office-holders launched their own anti-union campaign, threatening that state financial support for the plant would be withheld if the workers unionized. The vote for a union narrowly failed.

While these pressures for change have come from anti-worker forces, some workers and unions are also putting forward new issues, practices, and strategies which represent another vector in the transformation of collective bargaining. Led by professionals, such as nurses and teachers, these unions have challenged their managers’ efforts to control their conditions of employment. In so doing, they have questioned the sanctity of what labor relations experts call “management prerogatives.”

The Saint Paul Federation of Teachers’ recent contract campaign is an impressive example of this new vector. As SPFT Local 59 began to prepare their campaign a year before the contract’s expiration, they organized internally by creating a “Contract Action Team” to survey rank-and-file teachers and encourage them to attend bargaining sessions. Externally, SPFT 59 brought parents, community members, and teachers together at house parties, book discussions and focus groups. Union officers and staff held listening sessions to hear the range of ideas generated by this multi-part process. The union then produced a detailed pamphlet, The Schools St. Paul Children Deserve, which was unveiled at a public meeting where the Union pledged to bring the primary recommendations of both teachers and community members to the negotiating table. They also invited parents and community members to witness bargaining sessions and, on occasion, to speak on specific issues. SPFT 59’s reliance on rank-and-file teachers, parents, and community members expressed a new approach to the very process of collective bargaining.

The recommendations in The Schools St. Paul Children Deserve similarly pushed the boundaries of traditional collective bargaining. The union distilled, structured, and articulated the concerns they collected into key themes:

SPFT 59 justified placing these issues on the negotiating table on two grounds: 1) These issues are central to the working conditions within which teachers do their jobs; and 2) Given their personal values and their professional education, teachers are the logical point people for the advancement of the interests of students, parents, and the community.

While no one on either side of the negotiating table denied for a moment that these issues would cost substantial money to address, it is important to note that the union had not placed a formal demand for wages and benefits on the table. SPFT 59’s leadership was quite explicit that teachers’ compensation would be the last issue they would address.

This really was a new approach to collective bargaining.

The law specifically excluded farm workers, domestic workers, and all levels of public employees. Individual states have adjusted some of these ground rules, and in 1961, President Kennedy issued an executive order granting federal employees a “limited right to collective bargaining.”

Seven-plus decades of collective bargaining practices have established a set of behaviors as “normal,” “conventional,” or “typical.” These include: the grounds on which bargaining units are determined, such as the exclusion of foremen from membership in the same union as the women and men they supervise on the job; a machinery for the resolution of disputes and discipline, including grievance procedures, mediation, arbitration, and the right to strike; ground rules for unions’ use of the strike and management’s use of the lock-out; and the scope of bargaining itself and the claim of management rights. While none of these practices is dictated by the law, there are labor lawyers, management consultants, scholars, and journalists who talk about them as if they are non-negotiable.

It is the claim of management “prerogatives” which is being most energetically contested by the new union strategy manifested by the Saint Paul Federation of Teachers. The hiring of librarians, nurses, social workers, and counselors has always been the purview of administrators. So, too, have been class size and requiring students to take standardized tests; the expansion of pre-K programs has been a matter for the School Board itself. But the union was determined to bring these issues to the negotiating table with the intent of making them part of the collective bargaining agreement, the educators’ very contract. As Nick Faber, an elementary science specialist and SPFT secretary, explained in an October 2013 article in Labor Notes: “That’s how union teachers in St. Paul feel about our contract: it’s the most important legal document – and social justice document – for ensuring a quality education for our students.”

The notion of “management prerogatives” did not gain traction until the U.S. collective bargaining system was more than a decade old. The mid-to-late 1930s power struggle between corporate management and the new industrial unions of the CIO lurched back and forth, pushed to and fro by slowdowns, sitdown strikes, and mass picket lines, from one side, and company thugs, militia, and national guardsmen, from the other. Government intervention during World War II led unions to trade the right to strike for institutional security, while offering employers guaranteed profits in exchange for allowing the government to impose price controls.

When the war ended, the struggle for control over workplaces began anew. In 1945-1946,
4.6 million workers struck nationwide. The battle between General Motors and the United Auto Workers took center stage. Under Walter Reuther’s leadership, the UAW demanded not only a 30% raise in wages but also that GM not pass that wage increase along to the public by raising prices on its cars. As the strike wore on month after month, the union, amid much public fanfare, called for GM to “open the books” and reveal just how much money it was making and how much it could afford to pay its workers. GM’s executives C.E. Wilson and Alfred Sloan responded with a forceful defense of their “right to manage” based on their and their stockholders’ property rights, their ownership of capital. After five months, GM offered Reuther the compromise of a 15% raise with no concession on management’s right to set prices. Although many strikers expressed their willingness to hold on longer, the UAW leadership encouraged the acceptance of the offer, and the strike ended.

With the benefit of hindsight – that is, from the vantage point of our own moment – we can see the consequences of the union decisions of those fateful years. GM would raise its prices along with many other U.S. corporations, and by the end of 1946 inflation would eat up the UAW strikers’ raises and those which had by won by workers in other industries. Two years later, the UAW negotiated a contract with GM which specifically ceded claims to consultation on workplace technological change in exchange for productivity-based wage increases and job security. Not only had the UAW significantly weakened its power at the bargaining table but it had also yielded its presence in the workplace. Given the UAW’s pace-setting role for the U.S. labor movement in the late 1940s-early 1950s, this compromise set a pattern which would shape collective bargaining agreements throughout the United States. Throughout the private sector the line demarcating unions’ authority became circumscribed by the notion of management prerogatives.

When significant numbers of public sector workers began to organize in the later 1960s and early 1970s, the government officials, lawyers, judges, scholars, labor relations experts, and even the leaders of the new unions who would shape public sector unions and labor practices would take for granted the ground rules that had taken shape in the private sector workplaces of the post-WWII years. But there is no capital in the public sector, and if there is any property in the public sector, it belongs to taxpayers and citizens. But public sector labor relations emerged with a respect for the concept of management prerogatives which had been developed in the private sector, in the world of property, the world of capital.

The boundary against which SPFT 59 (elaborated here) and several creative teachers’ and nurses’ unions have been struggling has no legal or principled right to exist. The expertise is held by the workers themselves, and it is this expertise which should prevail in breaking that boundary. Teachers themselves and the parents whose children they teach know best how children can succeed in challenging, and creative, school settings. One can credibly argue that the managers of non-profit hospitals and other institutions have no reasonable grounds on which to challenge nurses’ and other healthcare workers’ efforts to bargain about patient staffing, the delivery of care, and other workplace issues about which they truly know little. As these teachers and nurses and other creative unionized workers stand up for their students’, patients’, and constituents’ needs, it is no wonder that they find our long-standing system of collective bargaining to be in need of substantial transformation.

SPFT 59, without a strike, won many of their demands: caps on class size which take into account the socio-economic status of students; reduced time for testing and more time for teaching; support for Education Assistants to become teachers, for new teachers to receive mentoring from experienced teachers, and for increased peer mentoring for all teachers; a restructuring of parent-teacher conferences; extension of the union-initiated home visit program. They also gained wage increases for all Saint Paul teachers. The union also won commitments from the administration and the School Board to hire 42 additional librarians, nurses, counselors, and social workers, and to expand funding for the pre-K program. These latter items were not included in the contract per se, but they are certainly the outcome of a collective bargaining process.

It is possible that these new vectors, these new approaches to collective bargaining, will lead other workers and their organizations, in the private as well as the public sector, to question the seemingly sacrosanct shibboleth notion of management prerogatives. These new tactics and new visions will prove crucial in reshaping a labor movement committed to advancing all working peoples’ interests in the decades ahead.