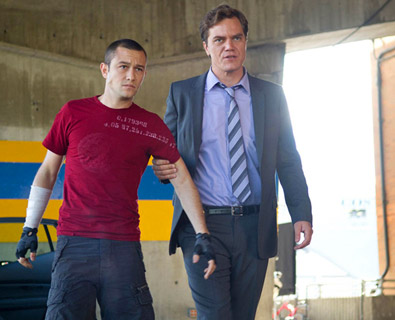 According to Wilee (Joseph Gordon-Levitt), the protagonist of director David Koepp’s latest film Premium Rush, there are over 1500 bike messengers in New York City. If all of them rode like Wilee, who doesn’t have brakes on his bike, there would likely be 1500 car accidents every day in the Big Apple. On a normal day, this guy rides like he’s got a death wish, but the story revolves around Wilee on an unordinary day, when his latest delivery is so attractive to outside forces, it could get him killed before he gets the owner to sign on the dotted line.

The streets of NYC make up Wilee’s workplace, and he couldn’t be happier about it. Sitting behind a desk and wearing a gray suit is his idea of hell. Wilee even talks with co-workers like girlfriend Vanessa (Dania Ramirez) or rival Manny (Wolé Parks) via his earphone while he rides: not your traditional water cooler chitchat.

The sunnier side of Wilee’s work life gets eradicated when he takes on a delivery job from friend Nima (Jamie Chung). Wilee needs to deliver an envelope to Chinatown, but one man, dirty NYPD detective Bobby Monday (Michael Shannon), is intent on stealing the envelope’s contents for himself. Monday has a problem. He doesn’t know how to walk away from a gambling table. A side effect from this addiction: he owes two gangs a lot of money. Stealing the envelope is like doing a chore for one of the gangs, it’ll help him break even for once.

After Wilee and Monday meet for the first time, it’s evident that neither one is going to leave the other alone until ribs are broken and blood is spilled. Wilee is dedicated to his company’s mission of keeping packages secure. Monday needs to keep his business associates happy. And he has a temper issue. These headstrong characters colliding sets the stage for many chase scenes throughout NYC, with Wilee on his trusty steed of a bike, Monday in his sleek car, and everybody who has to endure their reckless riding and driving pounding their horns like monkeys on crack.

Koepp has some truly awesome screenwriting credits under his belt: Jurassic Park, Mission: Impossible, Stir of Echoes, and Spider-Man (2002) all owe part of their cinematic excellence to him. Premium Rush, which Koepp directed and co-wrote (with John Kamps), is nowhere near as memorable as the aforementioned films, but it does manage to evoke urgency through its fast-paced storytelling.

The chase sequences propel the story forward with relentless style. In fact, about 70 percent of the film seems to involve Wilee chasing someone or being chased by someone. But that’s okay, because Koepp’s direction makes the chases interesting, even if they go on for more than ten minutes straight sometimes. There are usually multiple people doing the chasing at once, such as when Wilee is being pursued by an NYPD bike officer and Monday at the same time. The editing helps accelerate these chases by frequently cutting to fast close-ups on everyone, while enough pan-out shots are incorporated to make it so you aren’t always looking at Gordon-Levitt’s face (even though he can be dreamy).

There are also some fantastic overhead shots of NYC that are manipulated with GPS arrows and screen pop-ups that show a closer look at a location, just like something Google Maps would do. This type of scene happens when Wilee uses his GPS, and it effectively draws you into his actions and gives you a grasp on the movie’s sprawling geography. It’s a similar technique that Mark Neveldine and Brian Taylor used in Crank, and Koepp uses it just as well here.

The dialogue, while at times fresh (Shannon says some outrageous, unpredictable things) and almost always funny, gets bland and too silly for its own good after the first hour. There are only so many insults guys can yell at each other in a chase scene. Koepp and Kamps do succeed in handling multiple storylines with different timelines skillfully. There are a lot of layers to this story. At first you don’t know why events are unfolding the way they are, but with each shift in the story’s POV and time setting, you get thrown another meaty bone of information that’s served with a side dish of character depth.

The two best performances come from the two people with the most screen time: Gordon-Levitt and Shannon. Gordon-Levitt has the ability to come into any genre and be likeable and realistic within that genre’s guidelines (see (500) Days of Summer, The Dark Knight Rises, 50/50). He’s a cheerful wise-ass this time around, but he also manages to bear a sense of admirable responsibility that makes you want him to stay alive. Shannon, who has made a name for himself with powerful performances in Shotgun Stories, Bug, and Take Shelter, gives the villain a complex attitude you don’t see all too often in mainstream popcorn flicks. He fluidly switches from being solemn and nervous to over-the-top angry (just like a real person!). There are times you almost feel for his character, which is a pretty large achievement by Shannon, considering Monday is a despicable slime ball.

Overall, Premium Rush is breezy entertainment that you’ll especially enjoy if you dig Gordon-Levitt or Shannon enough to follow them on Twitter. Seeing this movie was a similar experience to watching Green Lantern (2011) last summer. I laughed a lot at the comedy, cringed a few times during the action scenes, and walked out of the theater knowing what I’d just watched wasn’t the best effort by anyone involved, but it was still worth the crumpled five-dollar bill I handed over for the ticket.