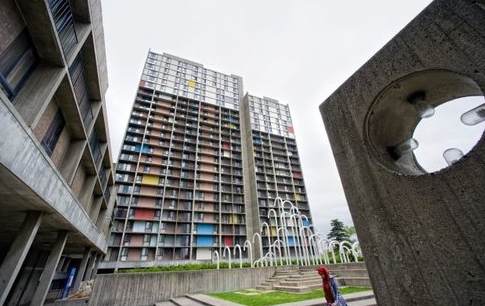 Politics, dueling agendas and passionate pleas were all part of a recent  meeting at the Brian Coyle community center, where more than 250 tenants from the Cedar Riverside Towers showed up to complain about living conditions there.  Council member Abdi Warsame invited heads of city departments including the office of civil rights, health and safety, regulatory services and State Senator Kari Dziedzic (DFL), who represents the Cedar Riverside area, to be part of a listening session where residents of the iconic Cedar Riverside towers,  complained about broken elevators, lack of parking, and a lack of respect and cultural competency on the part of Sherman Associates and the employees who manage the complex. No representative from Sherman Associates, the company who owns the towers were at the table  listening alongside city employees. Nor was any representative from the Riverside Plaza Tenants Association. Organizers say it was about gathering the community and listening to the residents.

“This is all about empowering the residents and hearing their concerns,” said Mohamed Mohamed of West Bank Community Coalition. His organization helped organize the listening session.

Residents sometimes became emotional about issues they have been experiencing with Sherman Associates. Men and women spoke passionately in Somali, while translators relayed the information to city officials who were there to listen, document complaints and see what, if anything can be done to fix some f the problems residents described. It quickly became emotional as one woman told the crowd about her son, who has been trespassed from the complex and is living on the streets, despite her wanting him to come and live with her. Another woman brought pictures of mold that has been growing in her bathroom. The biggest complaint residents had were about elevators. One woman said the elevator in her building had been out for two months. Others say they regularly have to walk up the stairs to the 15th, 16th floor. That did not sit well with State Senator Kari Dziedzic, who said that the owners received about seven million dollars in state money in 2010/2011.

“If it’s true that elevator has been inoperable for two months, that is not acceptable. I will be following up with MN State Housing Finance Agency,” she said. Dziedzic also said that Sherman Associates received 29 million dollars in state and federal historic tax credits.

Valerie Doleman, chief marketing and communications for Sherman Associates maintains they are totally transparent with the money they received. In an email from her office, she said that the cost of the construction/renovation was $65 Million not $132 Million as has been reported. She encouraged tenants and others to check their website, where documentation of all money spent is published an available for the public to view.

Doleman maintains that residents concerns are handled in a timely manner. Out of 17 elevators, she recalls on being down but doesn’t know for how long. Overloading is an issue on the elevators, but they are working on that.  Sherman maintains that property is inspected several times a year and that they are committed to having someone run the elevator at busy times during the day and that someone be on-call to answer concerns.

Doleman says that someone from Sherman was at the meeting but was not invited to sit on the panel with city officials to hear resident concerns. That runs contrary to what Council Member Warsame said, who said they reached out to Sherman Associates.

Responding to issues about cultural competency, Doleman said that they have a translator that works on site in the resident services office and strive to employ members of the community.

“We are an Equal Opportunity Employer and we have 65 employees at Riverside Plaza.  There are 10 different languages spoken by our staff.   Again, we have an interpreter and translation services 24 hours a day, 7 days a week, 365 days a year.  We use the same translation service that the Minneapolis Police Department uses,” Doleman said in an email.

City officials in attendance say that this is the first time they’ve heard these complaints.

Many promised to step up their game and provide better translation services when residents do call into complain.  Scott Wellin from the city’s 311 department explained the sometimes confusing of registering a complaint. There are currently 265 types of  complaints that get routed to city departments and Somali language is also not readily available as an option when calling.

Velma Korbel of the city’s civil rights department was cautious when asked whether residents complaints about lack of respect on the part of the management would be considered a civil rights violation.

“I can’t say straight out if there are civil rights issues. It could be motivated by a lot of  things. Apathy, lack of resources. There are too many things to put our finger on,” said Korbel.

Representatives from the Department of Health and Regulatory Inspections were also there and said this was the first time hearing these issues.

“This just shows us that we need to do outreach to make sure people make complaints to 311,” said manager Mike Rumpy from Regulatory services.

Representatives from 311 did ay they plan on being present at future community meetings and that they are fixing their phone tree to make sure different languages, including Somali are available to callers.

You may recall the heated House of Representatives race in 2014 between Mohamed Noor and Phyllis Kahn. If Kahn retires, it will leave  a leadership hole that both Warsame and Noor are eager to fill. This meeting is one of two where council member Warsame has sought to flex his leadership muscle when it comes to dealing with tenant complaints and other issues that have popped up in the apartment complex, where almost all of the tenants are  Somali and East African.

As previously reported in the Daily Planet, residents have been protesting against Sherman Associates since early January of 2015. It startedwhen Mohamed Noor of The Confederation of Somali Community in Minnesota, authored a letter to George Sherman outlining complaints he was hearing from mostly Somali mothers, including broken elevators, vehicles getting towed, despite payment of parking fees, and a feeling that management doesn’t care about its residents.

In March, Noor helped organize more than fifty women, who took to the streets of the West Bank demanding their concerns be heard.

Almost immediately, a meeting organized by The Riverside Plaza Tenants Association, or RPTA with Warsame slated to speak. Warsame is the former head of RPTA and held the meeting in the Cedar Riverside building. He told the overflow crowd he will make sure their concerns are heard.

While both are claiming to have residents best interest at heart, it’s unclear what progress has been made to resolve these issues at Cedar Riverside Towers.