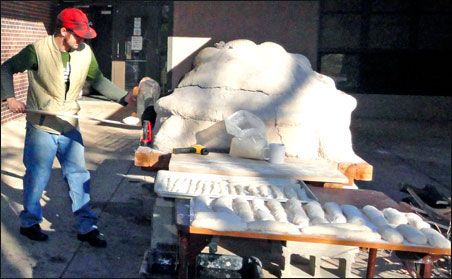 Once a year Michael Ziomko crafts 500 or so of his signature iron-black soup bowls to give away. And potter Jennie Lanners adds another couple hundred of her own colorful design, all for a neighborly good cause.

Filled with a steaming vegetarian soup, the handmade bowls are not only symbols of the need to feed the hungry but also the theme for Powderhorn Empty Bowls, a fundraiser and community-builder the two potters founded four years ago.

Since its inception five years ago it has raised and given away $74,000 to charities in the economically hard-pressed community fanning out from Minneapolis’ Powderhorn Park. Local potters have hand made and donated more than 4,300 bowls. Scores of volunteers make and serve soups and breads. Others donate vegetables or clay or time.

“Everybody in the Powderhorn Community just kind of comes together” to help out, Lanners says.

Both money and neighborly support are vital for a Minneapolis community deeply affected by the Great Recession. According to recent data from the U.S. Census Bureau, more than 20 percent of people living in the area fit the federal government’s definition of “poor.” Find the area profiled here in a new directory of neighborhoods presented by Wilder Research.

Add in the near-poor and those whose income is twice the poverty level ($44,226 for a family of four), and almost half of those living in the neighborhood are in danger of going to bed hungry at least some nights.

But beyond serving up soup and bread volunteers dish up camaraderie.

Ask 75-year-old Joan Gilbertson, who used to chop vegetables for the soup pots but for the last couple of years meets up with her knitting pals for both a hearty meal and a satisfying chat. 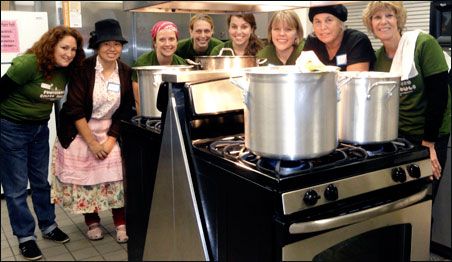 “I go because of the feeling of community,” says Gilbertson. “We hang out there a little bit. There’s always people to talk to.”

And community she finds, she says, in a gymnasium plastered with historical photos of the Minneapolis neighborhood and lots of familiar faces. Kids frolic at the indoor playground while older folks jawbone.

“It’s the community hug for the day. The park becomes the community living room. People come at 11 and stay for the whole day. It’s the great leveling field,” enthuses artist Lanners.

Diners choose a bowl, have some soup, then bring the bowl home as a reminder people are hungry and as a thank you for doing their part.

“We try to get there right at the beginning so we get the best pick of bowls,” admits Gilbertson, who says she’s got a collection of “maybe 10” artisan bowls now. 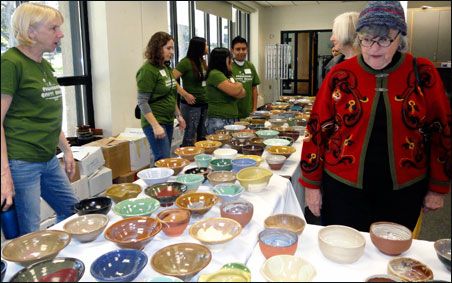 People give what they can afford, but the suggested donation is $20 per bowl per adult or $5 per kid. At $20 it “means somebody is going to be able to eat for four days, three meals a day,” Ziomko says.

“When we first started people would say things like, ‘I’ve never owned a handmade bowl before,”’ says Lanners, who donates brightly-colored dishes decorated with leaves and flowers. Now they have collections of them.

The Empty Bowls approach to help the hungry was the brainstorm of a pair of Michigan art teachers in 1990 and has spread across the United States and to points around the world. There are other programs in Minnesota, but the Powderhorn program has early roots.

Still, there’s a broader question. Serving up a meal of soup and bread is a good thing but the bigger question, Ziomko says, is “How do you solve the damn [hunger] problem?”