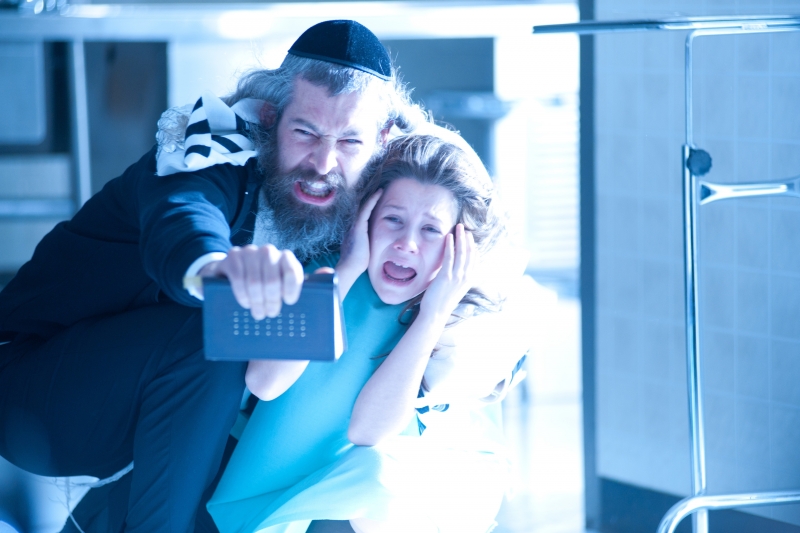 In The Possession, the latest release from horror legend Sam Raimi’s Ghost House Pictures, a pre-teen girl named Em (Natasha Calis) buys a wooden box at a garage sale. Seems harmless enough, right? But this box comes with some horrifying side effects that latch onto the poor soul who figures out how to open it. Like having a demon start growing in your chest cavity like some baby from Hell, for instance.

Poor Em is the one to open the box and rummage through its contents: a ring, a tooth, a miniature insect model, and other creepy items you may or may not find when rummaging through the bargain bins at Walmart. So, one night Em begins her new life as a moody half-girl, half-demon, which causes some major strife within her already imperfect family.

Em’s parents are divorced. Apparently, her dad Clyde (Jeffrey Dean Morgan) spent too much time in tunnel-vision mode coaching the local college basketball team, something that angered her mom Stephanie (Kyra Sedgwick) enough to kick him out of the house. Even though he’s no longer a husband, Clyde’s trying harder to be a good father these days. He takes his two children, Em and her teenage sister Hannah (Madison Davenport), to stay at his newly built house on the weekends. Even though he still gets distracted with the team, Clyde makes an effort to connect with his daughters. So he notices something is wrong with Em even before she stabs his hand with a fork at breakfast.

It doesn’t take Clyde long to realize that the yard sale box is the source of the mayhem pouring forth from his daughter. After surfing the Internet and seeking help from a professor, Clyde determines the box houses a malevolent spirit with Jewish folklore origins: a Dybbuk. Clyde then enlists the help of his ex-wife and a young rabbi named Tzadok (Matisyahu) in getting the Dybbuk out of his daughter and back into the box. Their actions inevitably lead to an exorcism in an unconventional location for such a holy act: a physical therapy room in the basement of a hospital.

The Possession isn’t a groundbreaking, innovative achievement. The film is the latest in a long string of demon/Satan possession flicks. Viewers who have seen anything from the glorious original of the sub-genre, The Exorcist (1973) to the backwoods thriller The Last Exorcism (2010), may feel like they’re walking through a familiar swamp of horrors. But that doesn’t mean the swamp can’t still be a thrilling place to trudge through.

Director Ole Bornedal injects The Possession with striking professionalism on a modest budget of $14 million. Some horror films get cut-happy in the editing room. Not the case here. Bornedal knows how to stay on one camera angle long enough to milk it of all the slow-burning dread it’s capable of building up. There are low zoom-in floor level shots in narrow hallways and exterior shots of windows of rooms where diabolical things are happening. Bornedal’s style is similar to that of a low-budget art-house film. He lends The Possession a sense of maturity that makes the peril of the characters all the more engrossing.

The actors also help pull you into the story. Jeffrey Dean Morgan, who’s probably best known for playing the Comedian in Zack Snyder’s Watchmen (2009) adaptation, shows great vulnerability as a divorced father grasping wildly at any solution for his daughter’s ailment. As Em, Natasha Calis shows she could have a long future in movies. She’s never over-the-top when she’s possessed, maintaining a reserved anger that’s sometimes held back and sometimes unleashed…with bad consequences for anybody near her. Calis isn’t completely evil when she’s got the Dybbuk inside her, though. She has brief flashes of her regular self, and in those moments Calis shows desperation like a pro. You can’t help but care for her, and she’s partly the antagonist! Sedgwick also adds a nice touch to the “distraught mom” role. Let’s just say she’s not there to merely scream and clutch the nearest person for comfort. The symbol of the monastery and all its power, Matisyahu is rather reserved for a man who must do battle with a demon. He’s likeable enough, though, with his simple desire to help those in need.

The story is written by Juliet Snowden and Stiles White, who also contributed to the screenplay for 2009’s dark mystery-thriller Knowing. Snowden and White handle the film and its characters with care. We get to know the key players before they’re thrown into dangerous situations. Morgan and Sedgwick are treated like adults. They don’t hate each other’s guts, but instead have moments of intimacy only tainted by the knowledge that they can’t go back to the way things were because of the divorce. Snowden and White only lose their masterful grip in the film’s climactic exorcism. Actions and motivations are thin in that hospital basement, and I would have liked to see a longer battle of wits and brawn between Matisyahu and the Dybbuk after Bornedal’s long build-up. The payoff is a little light on satisfaction.

Oh, but what a ride until then. If you like subtle, patient horror à la John Carpenter’s Halloween (1978) or even Ti West’s The House of the Devil (2009), then you’ll be able to appreciate what The Possession accomplishes.

The Possession is rated PG-13, has a runtime of 1 hour and 31 minutes, and was released nationwide to United States theaters on August 31, 2012.