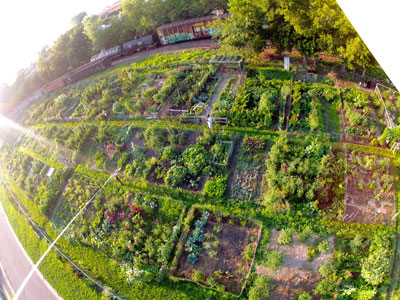 An aerial view of the St. Anthony Park Community Gardens taken by Kristen Murray, a member of Starling, the group that managed the summerlong Pop-Up Shop.

As construction on the Green Line light- rail project finishes up at the Raymond-University area and moves on to other parts of University Avenue, the summerlong St. Anthony Park Pop-Up Shop also comes to a close.

A collaboration between the Starling Project and the St. Anthony Park Community Council, the pop-up shop at 2401 University Ave. was an empty storefront that became a dynamic ever-changing venue for a variety of creative projects throughout June, July and August.

The 1,200-square-foot shop was rented for $225 to $250 a week and used as a gallery space and a site for public workshops. Art shows included work by WARM (Women’s Art Resources of Minnesota) members, DIY-style aerial photography from around the Twin Cities and pieces made from “found” or discarded objects. Some renters used the space to host creative workshops, such as sewing and circuit-bending by artist duo Beatrix*JAR and the interactive What Needs to be Said?, artist Rebecca Krinke’s cathartic project that encouraged participants to write their thoughts on pieces of paper that were then pinned to the walls of a paper-and-charred wood “writing room,” which was burned at the end of the project’s weeklong stay.

The St. Anthony Park Pop-Up Shop was the brainchild of the Starling Project, which was launched last December by a group of University of Minnesota graduate students led by Kristen Murray and Ben Shardlow. Starling matches artists, entrepreneurs and retail or office space-seekers interested in short-term rentals (less than one year) with landlords looking for tenants along University Avenue in St. Paul. 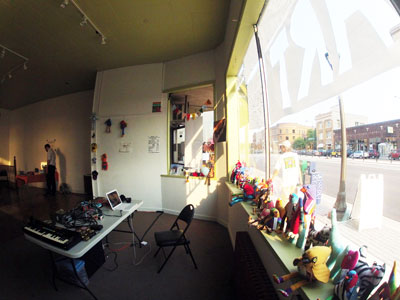 The Pop-Up Shop was transformed into a sewing and circuit-bending workshop by artist duo Beatrix*JAR.

The Pop-Up Shop was modeled after a 2010 project on Lyndale Avenue in Minneapolis called Storefront-in-a-Box. Murray was the project manager for that venture.

The project demonstrated “that there is a market demand for short-term rental opportunities, and that developing a functional framework for this type of tenancy—which is not conventionally found in commercial real estate—is possible,” Shardlow said.

The short-term rentals provided by a pop-up shop have the benefit of making it easier for artistic projects or new business ideas to emerge onto the public scene, Shardlow said. “We think the Pop-Up Shop has strengthened St. Anthony Park’s growing identity as a center for innovation and creative enterprises.”

“The Pop-Up Shop brought a new bright light to the area,” Sparks said. “It has boosted activity, excitement and garnered a fair amount of exposure to a neighborhood that has been a home to creative enterprises for many years.”

The project “gave a sense of optimism and excitement amidst the negativity surrounding the light rail construction period,” said Sparks. “Several of the renters have been pleasantly surprised by how many people from the neighborhood have stopped into the shop.

“In the long run, I think it’s going to help the area recover quicker than we would have without it.”

What’s next for Starling?

“We’re looking forward to applying the lessons that we learned and the rental model we created for the St. Anthony Park Pop-Up Shop project at other sites along University Avenue, potentially cultivating relationships with other district councils like we did with the St. Anthony Park Community Council,” Murray said. 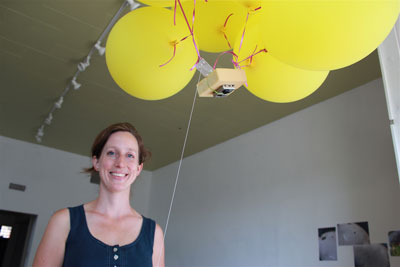 Kristen Murray demonstrates how to take an aerial photograph with a simple camera and a few helium-filled balloons. (Photo by Kristal Leebrick)

“We’re also hoping to extend our client base to more entrepreneurs and other people and organizations looking for space along the length of University Avenue in St. Paul. We’re tracking vacancies along the corridor and getting in touch with the property owners.”

The Pop-Up Shop was the beginning of a series of events that the Community Council hopes will launch the neighborhood’s growing identity as the Creative Enterprise Zone. A Creative Enterprise Zone task force was convened two years ago with the goal of keeping and building on the creative enterprises that have long been part of south St. Anthony Park.

The area has been home to artists, craftspeople, creative start-ups and a variety of nonprofits that were drawn to the area over the last 30 years by its low rents. The task force aims to strengthen opportunities for creative workers to stay in the area.