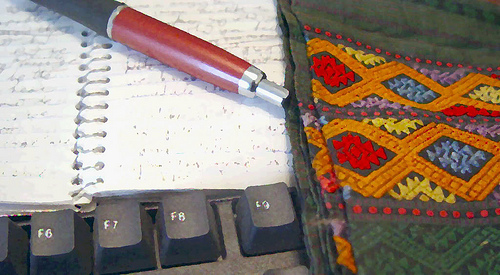 This month I’ve been celebrating the fifth anniversary since the release of my first full-length book of poetry, On the Other Side of the Eye, and part of that process has been looking at the poems I’d included, and what I was thinking. One that struck me was “Babylon Gallery,”one of the very first poems, if not the first, I’d written in response to unexploded ordnance left over in Laos for forty years.

Like many poems, this was based on a true story. Just before the Lao New Year in 2002, an emerging Hmong writer brought my friends and I a spoon from Laos from her recent journey. The spoon wasn’t much to look at. But it was made from an American cluster bomb dropped sometime during the Secret War.

She wanted to know if we would be interested in including it in the exhibit we were organizing at the Babylon Gallery. This was an unusual Lake Street exhibition space at the time. Part punk rock dance hall, part art gallery, and part studio, among other things. It was located just a hop, skip and a jump away from a cemetery and Little Brothers Friends of the Elderly.

When we heard the story behind it, we all agreed to include it. We placed that humble little spoon among the work of Lao and Hmong artists such as Mali Kouanchao, Vongduane Manivong, and Thep Thavonsouk. Many visitors asked, naturally, if it was really art.

This exhibit was entitled The Five Senses Show, and ran from April 12th to May 2nd, 2002. That makes it ten years ago, made possible by a chance encounter with the poet Ellen Hinchcliffe.  As artists and community activists, we learned a lot, making many new friends we work with to this day. Eight years later we applied the better lessons to how we organized the Legacies of War: Refugee Nation Twin Cities exhibit at Intermedia Arts. Unfortunately, I never did get a picture of that spoon.

Shortly after the exhibit, I wanted to respond to the whole experience, but it was that spoon that lingered with me. My poem went like so:

She brought the gray spoon
We hung upon the gallery wall
From the talaat stalls in downtown Phonsavan.
She was supposed to be collecting dab neeg—folktales

That stumbled elephant we rode in on.

She was an indelicate work, this buang.
A light cockatrice feather
Crude malice her center
Her bowl an echo of bomb craters
Whispering mad as Gorgon.

“They dine with spoons like this all over there,”
We’re informed.

“Hammered from war scraps the dogs
Find indigestible. They sold me this one
Certain it’s American bullets at the core.”

“It was time, they said, we took them back.”

I pondered how many startled people
This carnivorous spoon passed through
in her previous incarnations,

Karma denying her a role in a finer flatware set for the saints.

“Babylon Gallery” was one of the more complex speculative poems for me to write from the early 2000s. Back then, most of us didn’t really have a full picture of how Minnesota interesected with the Lao story.

I recall my chief concern had been how to capture all of the experiences of the many different voices involved in such a story. Lao, Hmong, Christian, Buddhist, Europeans, etc. And what happened when I incorporated mythological motifs to address such a serious issue? The late Outhine Bounyavong had a short story about UXO, but there weren’t many of us who were really pushing the boundaries of how to bring it up.

I often point out now that there are more bombs than people in Laos. Some 78 million cluster bomblets by some accounts. The scrap markets are still thriving. They’re still turning out everything from spoons to jewelry for wedding presents. And hundreds are killed each year, long after the war had ended.

This August represents the second anniversary since the United Nations Convention on Cluster Munitions went into force banning the sale, stockpiling, and use of cluster bombs. The US hasn’t signed it but did raise their commitment to $10 million a year for the next decade to clear those bombs out of Laos. That would get us about 1/4th of the way to significantly clearing the way for a peaceful legacy. The musician Leonard Cohen once sang about someone saying we shouldn’t ask for so much, but then another said, “Hey, why not ask for more?”