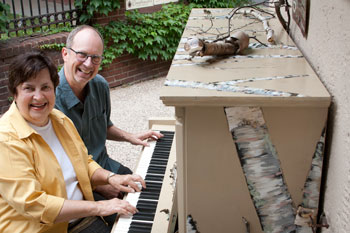 The Schubert Club brought a gift of music to Milton Square on July 19. Here Julie Himmelstrup, Music in the Park artistic director, and Jon Schumacher, St. Anthony Park Community Foundation executive director, test the piano with a lively rendition of “Roll out the Barrel” (we’re not kidding). (Photos by Lori Hamilton)

Let your inner Billy Joel run free this summer. Check out the painted piano in Milton Square that moved in on July 19. It will be open for passersby to play during business hours through mid-September.

The piano, a part of Keys 4/4 Kids’ Pianos on Parade, is a gift from the Schubert Club, which sponsored the piano. The Schubert Club merged with the Music in the Park Series two years ago.

Barry Kempton, the Schubert Club’s artistic and executive director, said the organization wanted to show its continued commitment to the community of St. Anthony Park, where Music in the Park began under the direction of St. Anthony Park resident Julie Himmelstrup, the artistic director of the 34-year-old chamber music series.

“We wanted to do something a little extra,” said Kempton. He described the commitment to Music in the Park and the neighborhood as “as strong as ever.”

The piano, painted by Patty Paulus, is called “Birchbark.” Paulus is married to Stephen Paulus, a Minnesota composer.

The St. Paul-based nonprofit Keys 4/4 Kids has placed more than 20 pianos outdoors in various venues in Minneapolis and St. Paul. A book of piano music accompanies the piano with music written by more than 20 Minnesota composers, including Stephen Paulus.

Muffuletta has volunteered to cover the piano at night and during rainy weather. 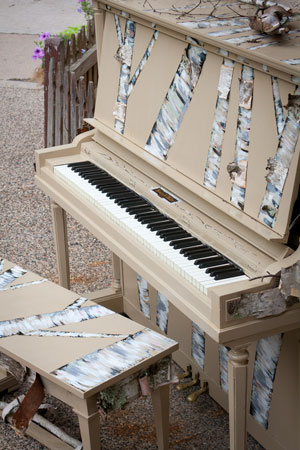 “Birchbark,” the named of the painted piano that will occupy a spot in the Milton Square courtyard for the next two months, is meant for the public to play. The piano is part of the Keys 4/4 Kids Pianos on Parade program. Muffuletta has volunteered to cover the piano at night and during rainy weather. The piano was painted by St. Paul artist Patty Paulus.