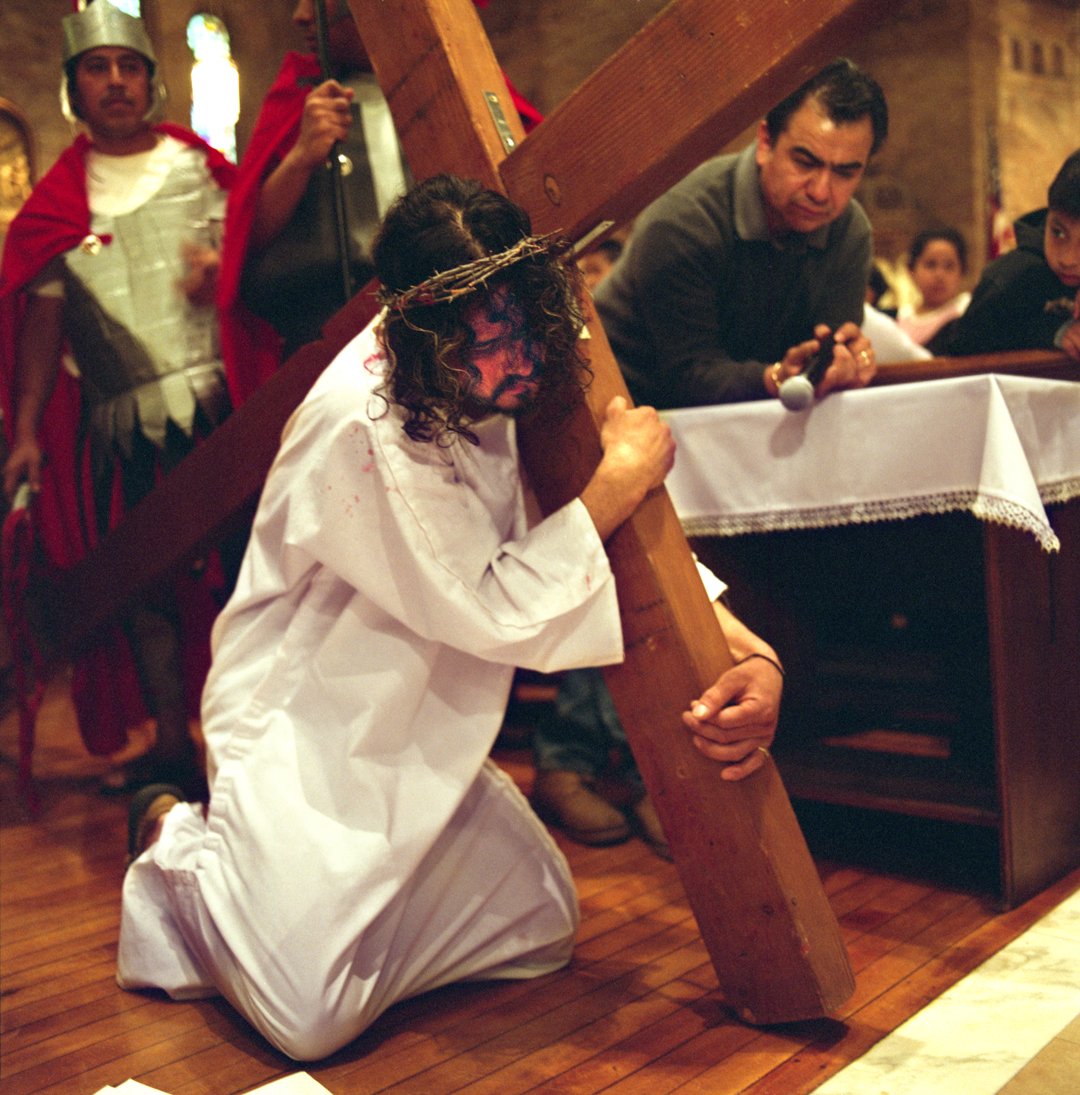 Today is Good Friday, the day Christians around the world commemorate Jesus’ crucifixion.

I did not grow up Catholic, but for as long as I can remember, I’ve been drawn to its iconography, its saints and the pageantry of holy days and feasts. I have a Saint Martin de Porres statue in my house. And sometimes, despite, my lack of religious devotion, I pray.

My family was also not religious. In fact, my grandmother and great grandmother, both Salinan Indians from the central coast of California, viewed the Catholic church and all its Missions with a healthy dose of distrust. But, it was part of their lives…floating from background to foreground at any given time. My great grandmother was born at Mission San Miguel underneath the rolling hills of the San Joaquin Valley. She attended feasts and celebrations there, but never kneeled or set her hands upon any pews. To grow up there, to live there and to talk with my grandmother about her family was to know how their lives were affected by Catholicism and how they maintained a great deal of distance from it. Still, I was drawn to those images.

My friend and photographer Xavier Tavera and I talked about this very contradiction when he showed me his pictures of a local Passion Play he’s been photographing for the last five years.  It’s at Sagrado Corazon de Jesus Catholic Church on 38th Street and Pleasant in south Minneapolis. The congregation is made up mostly of Latino immigrants, who spend months to produce the play. Xavier and I talked about what the Passion Play means for them and the circumstances of their lives.

TCDP: What’s the preparation that goes into this play and who are the people that participate in it?

Xavier Tavera: The people who participate are church-goers. These are people that don’t have any professional training in acting, or anything like that. They volunteer their time to do this and it takes a lot of their time, a lot of preparation.

TCDP: Why do you think they do it?

XT: I think it’s a very personal connection that they have with their faith and it’s also about making a connection between the suffering of Jesus and the crucifixion and the suffering and emotions that goes on in their lives. Of course I’m just making a speculation. I don’t want to put words into other people’s mouths or say that this is the reason why they do this.

TCDP: When we talked earlier about these photos, you drew a parallel between the lives of the people in the pictures, in the play and the life of Christ. Many have come a long way from their home country  and sacrificed a lot to be here.

XT: The path of the Christ going through all these things and he knows he is going to get crucified. Falling down three times and all that is a similar experience to the immigrant experience. Coming from wherever we come from and arriving all the way to a state like Minnesota. There’s a lot of suffering that comes with that and the decision to migrate.  This play is a little cathartic to attend and be in. People can voice out all the frustration and pain  that they have. I was mentioning it before, people take it very seriously. People cry. We know the outcome of the play. He’s going to be crucified, but we still suffer with him. People are crying, not just about Jesus, but also  about the long distance they travled, about their children they left behind and maybe about not being with their loved ones. About so many things. It’s a good excuse to let all that out by seeing the suffering in the performance.

XT: I photographed Passion Plays in Mexico City, where I’m from.  At first out of curiosity. I was born Catholic, but I am not very religious. I thought it would be an interesting thing because of the drama. But then I started to analayze it more carefully.  Not only the people who do the performance, but also the people who do the procession along with the performance. When I arrived here, I heard about this church in South Minneapolis. Why would people do this? Why would people spend so much time out of their daily lives to do this? It’s also an expense. They make their own costumes. People are so devoted. How they have all this faith.  It’s tradition> if you ask many of these people they would say that this is the way we’ve done it for so many years. That fascinates me.

TCDP: About the photos themselves…when we talked earlier and looked at the photos together, you pointed out some things that you really tried hard to catch. What were they?

XT: The actor that plays Christ has to speak into the microphone so people can hear him. So, the actor playing the Roman guard has to help him, has to hold that microphone up to him while he’s on the cross. Here you have this actor playing the part of the persecutors, but in the play they have to help Christ do the play and make it so people can hear. Those are some of the things that I like to photograph a lot. There’s also another actor playing a Roman guard who has made his costume out of insulation, a toy vest and a helmet made out of plastic. Those quirky things.

TCDP: You said you’re not a religious person, but as a Latino person Catholicism and the iconography is part of your life. It’s in the background.

XT: Absolutely. Carlos Fuentes used to say even the atheist in Latin America is Catholic. It is so involved in the culture and its taken for granted. It’s there in our daily lives…La Virgen of Guadalupe, the Sagrado Corazon.  Al that stuff is something you encounter daily…buses, stickers, air fresheners. We might not know the strict theological particularities of each thing, but we know the story and the context.

XT: Absolutely. It’s about the story and how it relates to our lives. Catholic or not.