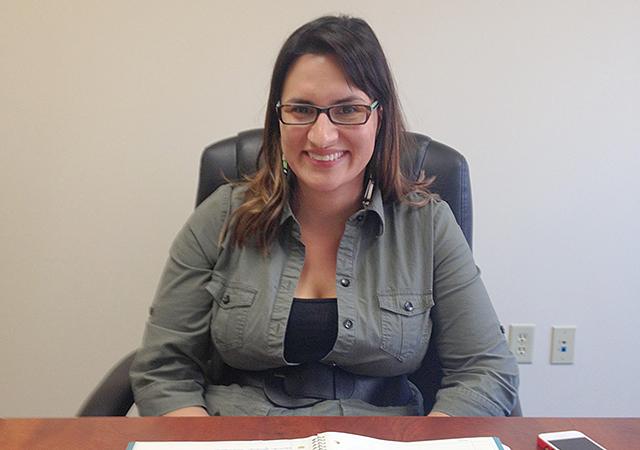 Peggy Flanagan: “There are incredible opportunities right now in the state of Minnesota.”(MinnPost photo by Cynthia Boyd)

Peggy Flanagan, the new executive director of Children’s Defense Fund-Minnesota, can put a real face on childhood poverty: her own.

“For a long time it was just my mom and I,’’ said Flanagan, who touts a personal history as a self-described “survivor and child witness” of abuse, as well as early years of economic struggles. Yet this woman, who smiles often and widely, also brings a background rich in advocacy for the less fortunate to the child advocacy organization she now leads.

Flanagan grew up poor Irish and Ojibwe. She overcame steep odds to graduate from high school and the University of Minnesota. (In 2012, Minnesota reported the high school graduation rate for American Indian students as 42 percent, compared to 76 percent for the general population.)

So, she knows what some kids today are up against.

Even before I learned all this about her, I wanted to talk to Flanagan to get her perspective on these unsettled times.

Federal sequestration is forcing budget cuts for early childhood programs for youngsters in need. Congress is fighting over school lunch program funding. Some state and federal lawmakers call for minimum wage increases while others oppose the very thought or can’t agree on the numbers.

Central to the mission of the non-partisan nonprofit Flanagan heads is a goal of leveling the playing field for all children regardless of economic background or race. It’s a heady aim. In 2011, 15 percent of Minnesota children lived in poverty. By the numbers, that’s 192,000.

I asked her: “How bad are things for Minnesota kids?” and she answered:

“There are incredible opportunities right now in the state of Minnesota”, she said. Last session the state was “friendlier to children and families. I don’t’ think we need to paint a picture of doom and gloom.’’ Minnesotans do the right thing, Flanagan said.

That action is one piece of what children need for stability. Childcare assistance for low income families is underfunded, she said, adding that some counties have waiting lists two years long.

Flanagan criticized the federal “partisan bickering” that is getting in the way of children receiving nutritious school lunch. She advocates for additional state money for early childhood learning programs.

She knows up close and personal how government can help its people.

“My mom is my hero,’’ Flanagan told me, speaking proudly of how her mother juggled parenting and school to become a phlebotomist, while the pair relied on public assistance to buy food, pay the rent and afford the young Flanagan’s many asthma-related hospitalizations.

“The help my mom received allowed her to get back on her feet, go back to school, get a good job and take care of me,” said Flanagan, 33, who grew up in St. Louis Park.

Her life history is a serendipitous mix of experiences leading to her advocacy role. “I’m talking not just about equality, but equity, a level playing field,” she said, a situation where all kids have access to what it takes to be successful.

The Minnesota organization is one of 13 Children’s Defense Fund branches around the country. The national organization, started by Marian Wright Edelman, grew out of the civil rights movement and celebrates its 40th anniversary this year.

Once planning on becoming an early childhood education teacher, Flanagan’s career trajectory took a sharp turn in 2002 when she signed on as a volunteer for the late Sen. Paul Wellstone’s Senate campaign.

“It sort of changed my whole world,’’ she said.

Some time later she would spend eight years at Wellstone Action, both as director and founder of the Native American Leadership Program and most recently as their director of external affairs. In the new job, she hopes to establish Freedom School, a literacy and culture program, in the American Indian community.

Flanagan is also adjunct faculty for the Native American Political Leadership Program at George Washington University in Washington, D.C, where she teaches principles of community organizing and non-partisan voter mobilization. She is considered a nationally recognized expert in those areas, especially with Native Americans and people of color.

Her broad palette of volunteer and work experiences also includes serving from 2005 to 2009 as a member of the Minneapolis Board of Education, becoming the first Native American and youngest individual to serve on that board. Early on she worked with young mothers while at the Greater Minneapolis Council of Churches and the Division of Indian Work.

Add to her experiences those of being a wife and being mom to a seven-and-one-half-month-old daughter, whose giggling photograph she needs only the slightest bit of coaxing to pull up on her iPhone.