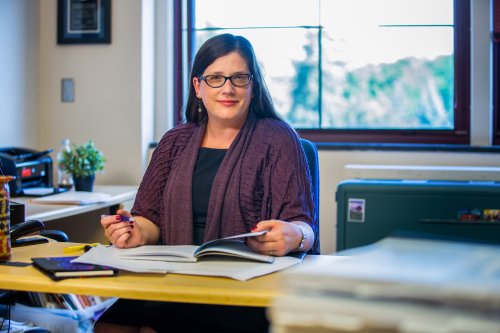 Volunteering at a rape crisis center in college changed Sarah Deer’s life. She worked with rape victims, heard their stories, accompanied them through trials. The crisis center was “grass-roots, tiny,” Deer says, but its influence was huge. Her work there set her on the road to becoming a lawyer and, this year, winning the prestigious MacArthur Foundation fellowship commonly known as a “genius grant.”

“I always really admired the theater of the courtroom,” she recalls, but she wanted to be a different kind of prosecutor, spending more time working with victims. In law school, she discovered that’s not the way the system works. “The prosecutor represents the government, doesn’t represent the victim. Maybe that’s a flaw in our system, but that’s the way it is. The victim is a witness, not the centerpiece of the case. The government is the centerpiece. … I saw the victim treated like any other piece of evidence. I understand that, but I couldn’t work in that way.”

Since becoming a lawyer, Deer has passionately – and effectively – advocated for victims of sexual assault and domestic violence. A citizen of the Muscogee (Creek) Nation, she has focused on the intersection of federal Indian Law and sexual violence against Native American women.

Deer explained in a 2005 article in the Suffolk University Law Review:

“Sexual assault law and legal reform is incomplete without a discussion about Federal Indian Law. There are three main reasons for this: Native American women suffer the highest rate of sexual assault in the United States, rape and sexual violence were historically used as weapons of war against indigenous peoples, and contemporary tribal governments have been deprived of the ability to prosecute many sex offenders.”

Deer makes crucial connections, says Clairmont. She cites Deer’s work on “Maze of Injustice,” a 2007 Amnesty International report that framed violence against Native women as part of “a legacy of widespread and egregious human rights abuses.”

In her work, says Clairmont, Deer helps to identify “the intersection between our historic trauma and all that oppression and how that relates to gender violence today … in a really thought-provoking, truthful way. That’s what I love about Sarah – she can put the truth out there, and risk a lot of things for herself.”

“Tribes are trying to update their laws to be relevant to their people,” Deer says. Many, though not all, tribes remain “stuck with these template laws that got handed to them. You’ve got marital rape exemptions in some of the tribal codes, because that’s what the state codes said at the time.”

“Imagine a blank slate,” says Deer. “You get to write rape law all over again. Get rid of all the baggage of European patriarchy and start again. With tribes, you have that opportunity. Just say we’ve got a blank slate. The state system has been a disaster for women, historically, so let’s not replicate that. But it’s really hard to think outside that box of ‘This is what a crime is, this is how you define and prosecute it.’ It’s exhilarating to be part of this. … The students are doing unique work and work that really matters.”

Deer’s heritage includes both teaching and outspoken advocacy. Her father taught high school, then went to law school and served as a state court judge in Kansas and as a Muscogee (Creek) Nation Supreme Court judge. Her mother was a teacher and her grandfather, Isaac Deer, was a teacher and a Kansas state legislator.

Routel describes Deer as having a “tireless commitment and a focus on people.”

She sees Deer as a “grass-roots kind of organizer,” eloquent in giving a voice to people who don’t have a voice. In the midst of this work, says Routel, Deer shows outstanding empathy: “Day to day, she’s the person I send any student to with a personal problem.”

Deer already has helped to gain passage of the Tribal Law and Order Act of 2010 and the renewal of the Violence Against Women Act in 2013.

“When you’re working on federal legislative reform,” says Deer, “it takes sometimes generations. It takes such a long time to convince lawmakers that they need to change things.” Deer says she is not sure how she will use the MacArthur fellowship. At 41, she has a long professional life ahead, and time to build on her success in teaching and advocacy.

Here are some statistics:

At top: (Photo courtesy of the John D. & Catherine T. MacArthur Foundation. Creative Commons license) “There is a sense that there is a ‘rapeability’ factor that comes from a product of the United States’ long history of anti-Indian and anti-woman policies, which have become part of the fabric of our society.” – Sarah Deer