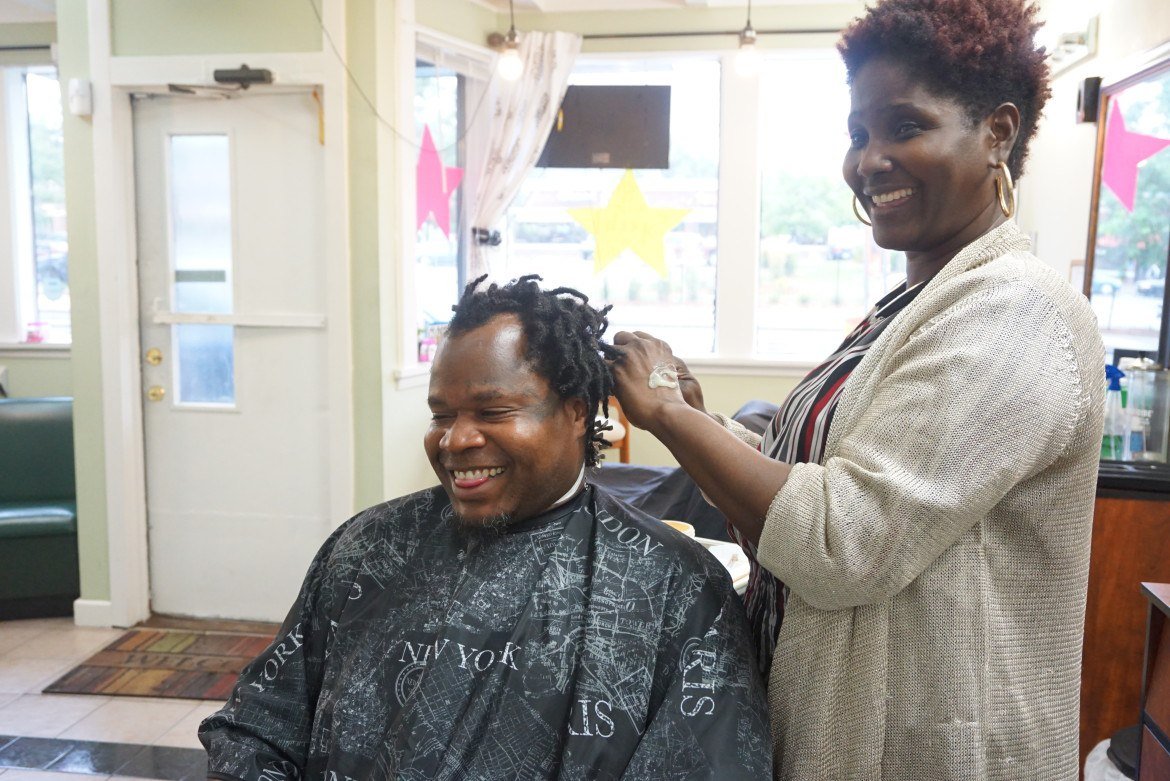 Marie Egbujor opened Paradise Beauty Salon in North Minneapolis’ 919 West Broadway in November of 2009. Originally from Haiti, she cherished the opportunity to run her own business. Marie chose the location on West Broadway because of the affordable rent and diverse environment. She soon grew to love the community of clients and neighbors and maintained good relationships with the businesses next door. Nader Abuammo of Brix Meat and Grocery helped clear the snow for her in the winter. She did the same.

Many lost everything in the West Broadway fire that blazed on April 15, 2015. Brix Meat and Grocery, a longtime business, was destroyed as well as the headquarters of Neighborhoods Organizing for Change (NOC). It was one of the last historic blocks on the city’s Northside. Neighboring businesses also faced uncertainty in the days following, some unable to reopen for two weeks due to smoke and water damage.

Paradise Beauty Salon shares a wall with Brix Meat & Grocery, one of the last businesses to catch fire. In the months since, Marie has struggled to keep her business afloat, but she is determined to stay at the location that has become her second home.

The day of the fire, Marie saw the smoke as she arrived, pulling up in the back as the caretaker was trying to put the fire out. She had to call and alert her tenants who were still in their apartments above her salon. Marie stayed until about 5:00 p.m., watching in horror with others as the fire raged relentlessly. With all the smoke, it was hard to tell what buildings were clearly burning. She felt extremely blessed to only have water and smoke damage. Unfortunately, the fire still left her with many problems that kept her from reopening right away. Her electricity was off, and the fire department shut off the natural gas after discovering it accelerated and sustained the fire.

In the days immediately following, Marie spent many frustrating hours on the phone, trying to obtain information on the status of her building and her business. Eventually, she was able to enter her salon, but was still unable to open. She felt completely in limbo, unable to work and unsure of when she could resume business, afraid her clients would move on.

Local organizations such as N​orthside Economic Opportunities Network (NEON) and the West Broadway Coalition (WBC) ​worked to support Marie through her next steps, as well as other businesses that were affected by the fire. They helped find a temporary space for Marie to work from until it was safe to reopen at her original location. Even with support from these nonprofits, Marie was mostly on her own, especially financially.

Marie has an inspiring, strong and positive work ethic, and the love she has for her work and her clients further motivated her to reopen with gusto. She had to repaint the interior due to water damage but didn’t stop there. Marie redecorated, working with the WBC and an artist to do window merchandising. With help from her husband and friends, Paradise Beauty Salon reopened–many think looking even more beautiful than before the fire.

Business for Marie has been slow to bounce back–in addition to the decrease of pedestrian traffic on that side of the block, many do not realize that Paradise Beauty is even open. But she isn’t discouraged. “I’m taking it one day at a time,” she said.

As clients slowly return and money trickles in, Marie continues to renovate and expand her business. She is leasing a chair to an independent barber and hired a young stylist. She’s comforted by the gradual comeback, but is concerned about other businesses making it along the West Broadway corridor. She hopes people won’t avoid doing business on the Northside. “I just want more people to not be scared to come to the Northside,” Marie said. “I want them to feel comfortable and support us, not only my business, but everybody. Every need they have, if they know that it’s here, I would like for them to consider us. You would want this area to go up [economically] first, before you spend money elsewhere… But we have to come together as one, and get it done.”