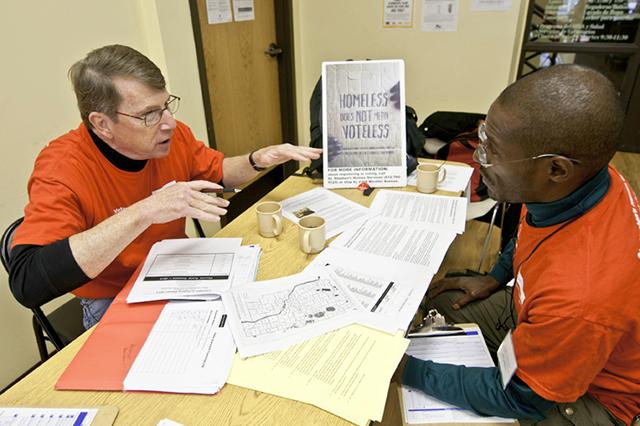 Voter-registration outreach efforts directed at often-disenfranchised communities, including the homeless, are not unusual, but this year there’s a new twist: explaining ranked-choice voting.

“You pick your top three choices. You use all three. That’s really the main thing people have to know,’’ advised John Knowland recently from his perch behind a voter registration table at Catholic Charities Opportunity Center, a drop-in center for the homeless at 17th Street and Chicago Avenue in Minneapolis.

With pre-voter registration finished, over the next weeks until Election Day on Nov. 5 there will be workshops and Q-and-A sessions on ranked-choice voting, Minneapolis’ new take on electing a mayor and members to the City Council, Park Board and the Board of Estimate and Taxation.

But for many it seems more complicated than that. The ballot looks different for one thing, and why should they vote for all three anyway? And considering the problems of finding food and shelter, why should the homeless concern themselves with an election at all, much less the ins and outs of ranked-choice voting?

“We’re trying to engage a community that is historically disenfranchised, helping people who feel really disconnected from the world get reconnected,” explained Cathy Heying, a human-rights advocate at St. Stephen’s Human Service, a Minneapolis nonprofit with a deep history of helping the homeless, including helping them access information they need to vote.

Dan McGrath, president of Minnesota Majority, a group that supported voter ID efforts last year, takes no issue with such voter-education efforts, though he voiced some concerns.

“I think everybody should put in the effort to be informed and exercise the right to vote. It doesn’t matter what demographic you fall in,’’ McGrath said.

But he calls it “safer” for people to get their own voter-registration materials and deliver or mail them to election authorities than to rely on others.

As for ranked-choice voting?

The St. Stephen’s enfranchisement effort, supported by a $20,000 civic-engagement grant from The Minneapolis Foundation, is aimed, Heying said, at reminding people that city elections can have way more bearing on their lives than presidential elections, which typically generate larger voter turnout.

And so, back to the Opportunity Center.

Knowland, a former architect and a former homeless person, is one of eight voter-outreach organizers working for St. Stephen’s Human Services to give the homeless and formerly homeless a political voice in the community.

Voter-education materials, including a sample ballot, copies of news coverage of a recent mayoral forum and printed materials from the City of Minneapolis on “How to Vote with a Ranked Choice Ballot’’ were laid on the table before him, as well as a motivational sign: “Homeless does not mean voteless.”

Sidekick Freddy Toran pitched the virtues of voting for one’s self interests, moving through an after-breakfast crowd busy shooting the breeze and sipping hot coffee from institutional-beige plastic mugs.

Some wandered over to the voter-information table, filling out the state form to apply to vote because their address had changed or they’ve never voted in Minnesota before or they’re no longer on parole following criminal acts.

Among those changing addresses was Noe Martinez. Farm-hand, roofer, cook, he’s more than once found himself homeless over the years. But whether he’s lived in Alexandria, Fergus Falls or Evansville, he votes, he said.

Everybody’s vote counts, Martinez told me — whether they have a permanent address or find themselves homeless and couch-hopping as he is at the moment. In fact, U.S. courts have issued rulings to that effect.

By the end of the pre-registration period, the St. Stephen’s team had registered 146 voters, short of the 250 they’d hope to have sign on.

Now their efforts are turned to explaining why voters should vote for first, second and third choices for each office, and that those choices must be different. 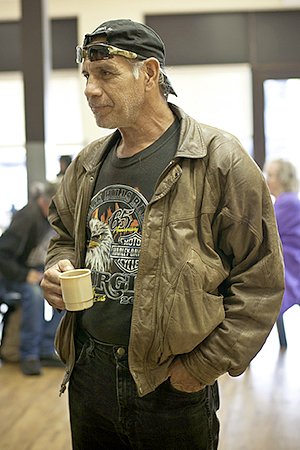 Heying thinks that in future sessions pizza or candy bars will be used to explain the ranked-choice voting process.

For instance, they’ll ask folks to vote for their favorite pizzas, rating them by first, second and third choice preferences, selecting from five choices, she said.

The idea in the pizza race (and by extension, in the Minneapolis election) is to find one “candidate pizza” that gets a majority of votes, which is 50 percent plus one, Heying said.

In the first count of votes, if there is no winner with a majority of votes, the pizzas (or candidates) with the least votes drop off. Say cheese pizza is the least favorite pizza, so the dairy pie is out of the running for office.

Vote counters then look at the cheese voters’ second-choice candidate and add that vote to the tally of a candidate still in the race. This goes on through the third choice, or until one pizza gets 50 percent of the vote plus one vote.

The St. Stephen’s outreach is part of a broader $175,000 civic-engagement effort funded by The Minneapolis Foundation, which is also a funder of Community Sketchbook.

Their intent is to increase voter registration and participation, including in those communities often left out of political conversations and the voting process. They hope they reach 65,000 people through such efforts as candidate forums, multi-lingual communications tools and voter outreach.

According to Luz Maria Frias, vice president of community impact for the foundation, quoted in a foundation news release: “Civic engagement is a critical strategy for creating sustainable change and addressing issues around racial, social, and economic inequities. We’re committed to making sure people have the tools and opportunities needed to be heard on the issues that affect them.”

“The way I was raised, you always vote. We vote for whoever lies the least.’’