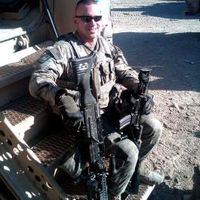 Jeff and Lori Wilfahrt of Rosemount, grew up in New Ulm, the son of Leo and Ruth Wilfahrt, and daughter of Betty Schaefer. They married and lived in Rosemount, where they raised their family, including Cpl. Andrew Wilfahrt, 31, who died in Afghanistan six weeks ago when an IED exploded.

Jeff Wilfahrt spoke today to a rally sponsored by OutFront Minnesota on the wind-swept steps of the State Capitol in St. Paul as part of the GLBT political advocacy group’s yearly Day on the Hill.  Andrew Wilfahrt is thought to be the first gay Minnesota soldier to die in the service of his country in the war in Afghanistan.

His sister has said that her brother’s sexual orientation was the least interesting thing about him, a remark Jeff Wilfahrt repeated to the crowd today. The elder Wilfahrt’s speech, which he read from a statement he prepared, cuts directly to American values and the creation of the American system.

I apologize for the sound quality–at the beginning, the cold April wind carried Wilfahrt’s words away. But listen carefully (and the sound gets better as the wind dies down) to a father made a “better human being, a better American, and a better Minnesotan” by the life and death of his beloved son.

Greetings to all, and thank you for the kind introduction.

I have no authority for what I am about to say. My only claim to fame is that I am the father of a fallen Minnesota soldier, the eighteenth to die in Afghanistan since 2007.

To all of you here in attendance and to all of those who serve in the Capitol of the great state of Minnesota I tender these following remarks.

Each and every one of you can be described by height, by weight, by eye color, by hair color, by ethnicity, by gender and by sexuality. You were born with these things, not a single descriptor I’ve stated is a choice.

We had a son. He was gay, he didn’t choose it. But he did choose as his life arc to serve in the Army with the 552nd MP Company. He died in Kandahar just six weeks ago. It was death by IED while on foot patrol.

Around ten o’clock that February Sunday morning there was knock at our door. As I approached the door I saw them, two Army officers, in full dress, I knew what this meant.

They asked me to identify myself. When I had stated my name they asked to enter our home. The news was delivered at our kitchen table; news that no one wants to hear.

To all of you as Americans, to all of you as Minnesotans I tell you that you can be proud of the American Army. They treated our family with kindness and respect. They do not give up their dead easily.

Our son had no significant other. But he did have a home and a family which never questioned his sexuality; it is as I have said not a thing about which he had any choice. And as his sister said, “it was the least interesting thing about him.”

Having no significant other his mother and I were named as his beneficiaries in the event of his death. I can tell you that a dead soldier is worth one hundred thousand dollars. In Canada it is two hundred and fifty thousand dollars. If you are a banker on Wall Street, your bonus is in the millions; and the bailouts are priceless.

The Minnesota Family Council is raising something in the neighborhood of $4.7 million dollars to promote a ballot referendum to place an anti-gay marriage constitutional amendment on the 2012 ballot. You can see that one hundred thousand dollars stands no chance against the collections from the church pews or $100 dollar dinner entrance fees.

They believe marriage is endowed with some sacredness, and indeed it may be within a creed, and creed as you recall is a choice. They believe that marriage should be between one man and one woman. And I ask them how will that be judged?

I challenge the one man one woman champions to define manliness or womanhood. Will you as a human being, an American, a Minnesotan be asked to open your trousers and to have your skirt lifted when applying for a marriage license?

And what will they do with the androgynous, the hermaphrodites born into this world? Again, this is not a choice. Will the androgynous be allowed to marry themselves as man and woman?

Many of the founding fathers were Deists. They were derived of European stock and knew all too well how religion within the political sphere was a corrosive thing. They turned to the Native Americans, in particular the Iroquois nation, to help form a model of government that would intentionally separate powers, and intentionally separate religion and state. Their model was a secular one

So let us go back to that Sunday morning six weeks ago. Let us human beings, us Americans, us Minnesotans assume for the moment that it had been a significant other to our Andrew who had answered that door.

Would there have been a death benefit? Would he have been offered a chance to go to Dover to receive his remains? Do you, as human beings, as Americans, as Minnesotans believe this denial of civil right to be proper and just?

To deny civil rights, including the right to civil union, to this soldier son of ours, whose life was given in service to this country, is to cast shame upon us as human beings, as Americans and especially as Minnesotans. We are better than that, I know we are, and we must make a change.

Ours is a secular society for a reason and that is to prevent religious doctrine from clouding our commitment to equal rights. We have not conquered all our difficulties; we have not resolved all of our social ills. We continue to make choices about change.

To the immigrants among us, I say welcome. Help us change. Help us with our melting pot; help us embrace the mosaic of life we humans represent. My sons’ ancestors also immigrated here, I have not forgotten.

To the Minnesota Legislature I ask that you stand tall, on principle, on civility, and on the constitution of Minnesota; and I quote from the Minnesota Bill of Rights:

Sec. 2. RIGHTS AND PRIVILEGES. No member of this state shall be disfranchised or deprived of any of the rights or privileges secured to any citizen thereof, unless by the law of the land or the judgment of his peers.

I hope my son didn’t die for human beings, for Americans and for Minnesotans who would deny him civil rights.

If an anti-gay marriage amendment succeeds, I give you my vow that I will fight it to the Supreme Court of Minnesota to answer the question of what is a man, what is a woman.

I thank you, but mostly I thank my son who made me a better human being, a better American, and a better Minnesotan.

Be good to those you see today, it is the grease of humanity.

Photo: Cpl. Andrew Wilfahrt, 31, of Rosemount, Minn., was killed Sunday, Feb. 27, 2011 by a bomb while on patrol in Afghanistan. (Photo Courtesy of Jeff Wilfahrt via MPR)