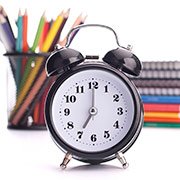 St. Paul Public Schools (SPPS) may follow in the footsteps of Minneapolis and Edina in changing their high school start times to be later. University of Minnesota researcher Dr. Kyla Wahlstrom’s report: “Examining the Impact of Later High School Start Times on the Health and Academic Performance of High School Students: A Multi-Site Study” was released and reported on in late 2013 and has provided the basis for SPPS’ proposed change.

The proposal for SPPS would start elementary schools at 7:30 a.m. and begin middle and high schools classes at 8:30 a.m. Dr. Wahlstrom’s report contributes many strongly proven academic and health-related benefits to shifting the start times. The study followed multiple, diverse school districts that have implemented changes in start times including Edina and Minneapolis public school districts as well as schools in Colorado and Wyoming. (The study includes over 12,000 students surveyed on all of the following figures and data)

Academically, the results are clear. There was a significant increase in the average GPA of students during their first few periods of class in all four core subject areas: English, mathematics, social studies, and science. Standardized test performances also benefited from the late start times and, although they are only one measure of student performance, in a pre-post analysis, scores on both standardized math tests and ACT increased significantly.

Indeed, in a rare instance of a related totally controlled study, the US Air Force Academy tracked students in either an early (7 a.m.) or a late start (7:55 a.m.) class and, over a period of four years, the positive effect was “equivalent to raising teacher standard by one standard deviation.”

Wahlstrom also indicates that, in the results of an additional study, previously low-performing students gained the most in all areas, both academic and health-related.

When Dr. Wahlstrom and her colleagues surveyed secondary teachers (around 3,000) on their “optimal first class start time” 81.7 percent stated after 8 a.m. and 35.7 percent cited a time after 8:30 a.m. as their preferred start time.

Many parents have already participated in the open meetings hosted by the district on this potential policy change. There have been many concerns about the policy’s implementation; however, Wahlstrom points out that community problem solving can take care of these issues.

Realistic concerns, demanding answers from those in the district, include: changing athletics schedules, elementary students waiting for the bus earlier in the morning, child care schedules, parent work schedules and local traffic patterns. Each potential problem, however, can and has been solved by the other districts participating in the late start system. For example, to deal with the earlier start times for elementary school students, parents in the Minneapolis public school district took turns standing in their neighborhood bus stop with the children in their community.

Ryan Vernosh, the district’s policy and planning administrator and former Minnesota Teacher of the Year, told MPR that “education can’t be a zero-sum game where the best interests of one group of students is pit against the others,” but he has committed to “come up with a plan that works.”

That is why it is so essential for families and communities to be engaged in the decision making process of the school district. We must make sure that families have the full story as to why this proposed start time change may be implemented and what its likely benefits are, to better benefit their children’s learning. We must also make sure that this is a conversation, not a lecture, and that families have an opportunity to shape the policy and help address any challenges that arise if the change goes forward.